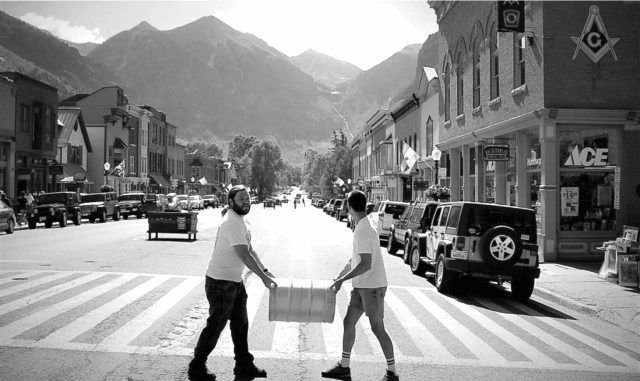 Beyond the Mountain Brewing celebrated its fifth anniversary earlier this month. Co-owners Charles Hixon and Morgan Way, who also serves as the head brewer, marked the occasion with plenty of their sudsy offerings at their laid-back Gunbarrel location (6035 Longbow Drive, Unit 109).

Originally from the East Coast, the duo, now in their 30s, got their start in the Boulder brewing scene while working at Twisted Pine Brewing (3201 Walnut St.). The beer aficionados are also longtime music fans who happily blend their passion for bluegrass and jam bands with hops and barley. The brewery’s website features an amusing black-and-white photo of the two of them carrying a keg across the main street in Telluride — a nod to the jacket cover of Phish’s Colorado ’88 release.

“On the cover of their album, they’re carrying a keyboard,” Hixon says. “We switched that out for a keg.”

Beyond the Mountain touts its history of partnering with roots-rock artists as part of its charitable efforts that bring together beer and music. Their music-themed team-ups have benefited local organizations including The Boulder Shelter for the Homeless and Girls Rock Denver.

“Our current music-related beer is tied in with the [bluegrass band] Big Richard,” says Hixon. “It’s a juicy IPA. I’ll approach a band I like and tell them about the charity aspect, where one dollar from every pint gets to go to a charity of their choice. If they like the idea, we brainstorm the beer together to come up with a style that they enjoy and then we try to make a recipe that matches the flavor profile they’re looking for.”

Other band partnerships for Beyond the Mountain include jam band The Jauntee, with whom the brewers created their popular Head Spin double IPA.

“We liked that one so much we made it a year-round offering,” says Hixon. “We dabble in music ourselves, though we don’t play in bands.”

Beyond the Mountain offers a pleasing variety of brews, including a kettle sour, some dark beers, German-style lagers, IPAs and a refreshing kölsch.

“We like to offer a little of everything,” says Hixon, who grew up in Virginia. “We have 12 taps that we try to keep full all the time. One tap is usually a seltzer, but the other 11 are beers of ours.”

In addition to teaming up with local and national bands to create beer, Beyond the Mountain Brewing presents live music every week, which helps encourage business at their taproom.

“We love Gunbarrel,” Hixon says. “It’s an amazing neighborhood that’s really starting to take off. The main thing for us was finding a building with the right ceiling heights and enough space for all our equipment. We’ll be here for at least three more years.”

Beyond the Mountain currently hosts live music on Saturdays, bluegrass picks on Wednesdays and open mic nights on Tuesdays.

“We’re very music heavy,” Hixon says. “We have a loyal group of people who come to our events and bring their friends.”

Hixon says his appreciation for the music the brewery features is evenly split between jam and bluegrass, and that his taste for improvisation and cross-pollination in those genres spills over to his approach to beer making.

“We recently did a collaboration with MainStage Brewing in Lyons,” Hixon says. “They’re a fun spot that also does a lot of music stuff. We created a dark lager with them. Collaboration Fest is coming up in the spring, which sees a lot of interaction between breweries. We’ll do some more collaborations for that.”