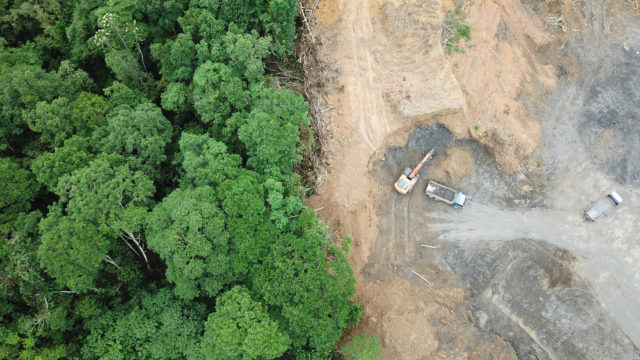 The beignets, eclairs and tartelettes at Ludovic Gerboin’s bakery in the small village of Moosinning, Germany, glow in vibrant shades of red, blue, green and purple. “In school, we learned that these are taboo colors for baked goods,” the Bretagne-born baker says in his strong French accent. But these colors, produced by microalgae he gets from a lab at the nearby Technical University of Munich (TUM), make his baked goods healthier. “The algae are rich in proteins, antioxidants and vitamin B,” says Thomas Brück, professor of synthetic biotechnology at TUM. “Two slices of algae bread cover your daily need of vitamin B.”

These nutritional benefits are a perk, but the most important aspect of Gerboin’s baking is undetectable by design: the tasteless, odorless “yeast oil” he fries his beignets with instead of palm oil.

This yeast oil comes from right here in Gerboin’s own bakery. At the end of the day, he roasts his unsold leftover bread, grinds it up and delivers it to TUM, one of Germany’s most innovative universities. There, Brück’s team ferments the stale bread with a special yeast, and within two days, a yellowish oil is dripping steadily out of the lab’s centrifuge. This oil is then sent back to Gerboin, who uses it for baking and frying. “The yeast oil lasts longer than palm oil,” he says. “I can reuse it up to 60 times. I even make my Bavarian cream with it.”

More importantly, it is a zero-waste, 100% sustainable solution. “We replace the conventional palm oil monocultures with a truly circular bio-economy without waste,” Brück says.

The devastating consequences of the world’s addiction to palm oil are well-documented. Check your cabinets and you will probably find it in half of the consumable products you own: pizza, margarine, peanut butter, detergent, candles, soaps and lotions, though it’s often disguised benignly as “vegetable oil” on the ingredients list. Between 1995 and 2015, palm oil production quadrupled, and is projected to quadruple yet again by 2050.

It’s such a lucrative business that 47 million acres of oil palm monocultures have replaced rain forests, destroying the critical habitats of orangutans, elephants, tigers and other threatened species. According to the International Council on Clean Transportation (ICCT), palm-driven land use in Indonesia and Malaysia generates roughly 500 million tons of CO2 equivalent each year — nearly as much as global aviation. The oil is also often contaminated with toxins.

But as an ingredient, palm oil is tough to replace. It is cheap, versatile and odorless, which is why hardly any bakery manages to operate without it. “Bread, croissants, beignets—it’s pretty much in every product, even in the chocolate fondant,” Gerboin admits. Especially during holidays, when he bakes for events, he easily uses hundreds of liters of palm oil per week. Ecological alternatives such as coconut oil or certified organic palm oil usually cost more than twice as much, and small village bakers like Gerboin already operate on thin margins.

Gerboin still kneads his dough by hand, lets his sourdough rest for 24 hours and spends half the night in the bakehouse. “He can’t compete with the industrial bakery down the road where their ready-made baking mix is done within two hours,” Brück attests after he spent a night baking with Gerboin. “It’s backbreaking work. But it makes you appreciate traditional quality.”

Brück and Gerboin had long been friends—their daughters attend the same Montessori school—before they started their partnership to produce a viable ecological alternative to palm oil. After seven years of tinkering, their patented fermentation process now takes only 48 hours to turn 120 kilograms of stale bread into 70 to 75 liters of oil. “That’s where the innovation from my lab joins forces with the creativity of a master baker to produce a high-value product,” Brück says.

From the start of his career, Brück, who studied in the U.K. and the U.S., has been looking for ways to use organic waste to replace chemicals and environmentally destructive production processes. For instance, Brück produces carbon fibers from algae for the bodies of cars and airplanes. “Algae grow 10 times faster than most plants and are excellent CO2 sinks,” Brück explains. “The airplanes and cars built from algae carbon already start carbon-negative into their lifecycle.”

The oil vats in the pilot facility at TUM resemble the steel caldrons of a brewery. Indeed, the process to produce alcohol is comparable: Brück’s team uses enzymes collected through fermenting bread; these enzymes turn the carbohydrates into sugar. Fermenting the sugar with different types of yeast can transform it into alcohol or fat. For the yeast oil, Brück isolated a particular yeast from Irish shrimp shells that is especially good at producing oil. A simple centrifuge separates the oil from the yeast without any of the toxins that are usually needed for palm oil production.

Brück emphasizes that the yeast is natural and not genetically manipulated. “We take waste products—shrimp cells and old bread—to create a new, high-value product. It is truly a circular bio-economy because the fermentation process uses no toxic chemicals and leaves no waste.” The fermentation wastewater is rich in nutrients and used again during the subsequent fermentation round.

Baked goods are a high-waste product. According to the World Wildlife Fund, 1.7 million tons of baked goods go uneaten annually in Germany alone. The highly perishable quality of them makes this hard to avoid. Before the yeast oil was invented, Gerboin roasted 10% of his unsold bread and reused it as flour. “But the time involved does not make this effort financially viable,” he says. “Therefore most bakeries throw everything away at the end of the day or give it to farmers to feed pigs.”

By upcycling some of these baked goods as yeast oil, Brück believes, “We can save at least four million tons of CO2, probably more.” To arrive at this number, he calculates the land and resources needed for international palm oil production. When he adds in the food and organic waste that is burned annually, “16 million tons of CO2 can be saved every year.” Sensing the skepticism at these big numbers, he gives a startling example: “In Bavaria alone, 600,000 tons of wheat bran are deemed insufficient for food production every year and are burnt. But we could use it very efficiently to produce yeast oil.”

Brück, along with Mahmoud Masri, who studied chemistry in Damascus before he perfected the fermentation of yeast oil, founded the startup Global Sustainable Transformation (GST) with the aim of producing 100,000 liters of yeast oil in 2022. With support from the German government, where Brück is a strategic advisor, they want to make their patented technology more widely available. “For one baker, the investment to build a fermentation facility would be too overwhelming, but for a big enterprise, or if several smaller ones team up, the investment will be amortized within a few years,” Brück believes.

According to Brück, the odorless yeast oil could also replace palm oil in soaps and lotions. At a current price of 1.40 euros (about USD $1.60) per liter, the process is price-competitive. After a year of upscaling, those costs could come down to 60 U.S. cents per liter, Brück estimates.

Until their new production facility is up and running, the trio is tinkering with other solutions. In addition to his green “alguette” and his tartelettes with algae filling, Gerboin is experimenting with integrating protein-rich insects into his bread and beignets, including baking the world’s first worm beignet. “Chocolate caramel beignet with 10% meal worms,” he says enthusiastically. “I even put insects into the cracknel.”

Fair warning to those on New Year’s resolution fitness kicks, however: yeast oil might be climate-friendly, but the baked goods it’s used in are no less caloric than those cooked with palm oil. “Thomas gained at least 10 pounds!” Gerboin teases Brück during our Zoom call, referring to the pallets of donuts he regularly delivered to the university for testing. On the other hand, it offers a perfect excuse: Sure, I’d like to eat healthier, but I need to indulge in those sweets for the planet.

This story is part of the SoJo Exchange from the Solutions Journalism Network, a nonprofit organization dedicated to rigorous reporting about responses to social problems.