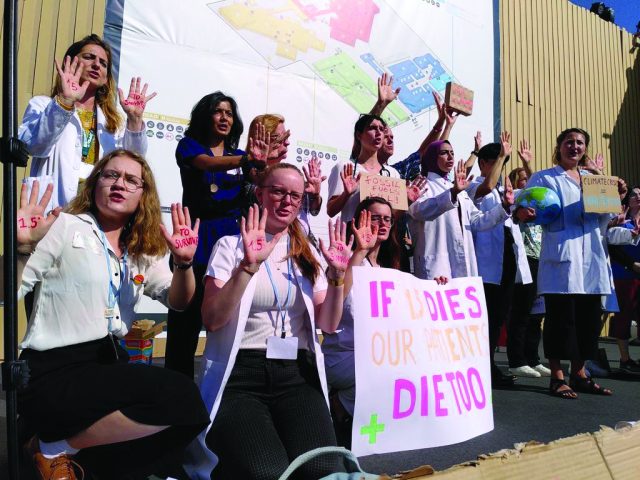 When Dr. Jay Lemery gives presentations on climate and health, one of his slides has two pictures with an arrow between them: one with a polar bear and an iceberg, and another with a kid and an inhaler.

“This is the transition we’re talking about,” he says.

Lemery, a professor of emergency medicine at the University of Colorado School of Medicine and co-founder of the university’s Climate & Health Program, sees the growing trend of climate change impacting human health.

Lemery was part of a group from the University of Colorado Climate & Health Program that brought this narrative to the global climate negotiations at COP27 in Sharm el-Sheikh, Egypt from Nov. 6-18.

“Our role [at COP27] was essentially to build connectivity and awareness of the health implications of climate change,” says Lemery, who has attended COP once before. The group was not part of the official negotiations, but held side events throughout the conference to “inform the negotiations.”

Climate and health has received increased attention at the global climate summit. Last year, COP26 was the first time the Word Health Organization (WHO) hosted a WHO Pavilion for daily health and climate programming.

WHO predicts that between 2030 and 2050, climate change is expected to cause 250,000 additional deaths per year from malnutrition, malaria and heat stress. The organization states that health shocks and stresses from climate change already push around 100 million people into poverty each year.

“Climate change is a health issue, first and foremost,” says Dr. Bhargavi Chekuri, a physician who works at the University of Colorado as an assistant professor of family medicine and attended the conference.

Health and climate change intersect in a variety of ways: increasingly frequent extreme weather events, disruption of food systems, spread of diseases and mental health issues leading to illness and death. Climate change also interrupts social determinants of health, like housing, livelihoods and access to health care. These impacts are disproportionately felt by the most vulnerable and disadvantaged.

Locally, Lemery points toward a projected increase in extreme weather events, like wildfire and flooding, in Boulder County that will destroy homes, degrade air quality and impact health.

“If nothing else, it just goes to show that we’re all part of this world and there’s really ‘no safe place,’” he says.

“It just felt like we weren’t talking about the elephant in the room, which is a changing climate,” she says.

With COVID highlighting flaws in the public health system, Chekuri was further motivated to think about how to improve the system’s capacity to respond to ongoing climate stressors.

Chekuri and Lemery are pushing for health to be recognized as an integral part of how we think about climate change so it is included in all mitigation, adaptation and resilience strategies.

Both spoke of feeling momentum building behind climate’s impact on health at the global stage.

Lemery noticed health becoming more embedded into narratives at COP, with more activism and attention in many different sectors devoted to health and health outcomes.

Chekuri says she sees successful mobilization from the health community to act on climate change, but she still needs to draw the connection between climate change and health for some people.

“It’s not just related, it’s the only reason any of us should care about [climate change],” she says. “Nothing matters if you’re not improving the health and well-being of people, preventing deaths and preventing disease and harm to human beings.”

Lemery says it is also easier to convince constituents to act when the issue is framed around people, rather than if they talk about more abstract impacts like parts per million of carbon dioxide in the atmosphere.

“They can taste the air pollution now where they used to not be able to,” says Chekuri.

Air pollution and heat are also of growing concerns for Collin Tomb, a climate and health strategist at Boulder County.

“Air pollution was the leading cause of death for our most vulnerable communities, including our historically and currently excluded communities,” she says. “We are very concerned about air pollution basically killing people, and climate change making it worse.”

The American Lung Association gave Boulder County ‘F’ grades for ozone and particulate pollution stating, “If you live in Boulder County, the air you breathe may put your health at risk.”

The County is developing a vulnerability mapping tool that overlays climate projections with demographic vulnerability factors to serve health and climate needs in the area. Along with a public-facing component, Tomb hopes the tool will be used to inform policy decisions both at the county and state levels. Tomb says the tool should be finished by the end of the year.

Even though COP27 is an important venue to network with the health community, Lemery is still focused on how the conference impacts his work at home. He hopes the Climate & Health Program at CU can lead the movement addressing climate change and its effects on health.

“I think [healthcare professionals] have a very unique position to lead and influence from health care,” he says. “We are trusted messengers, and if we’re not leaning in and effecting change, then I think we are missing a huge opportunity.”