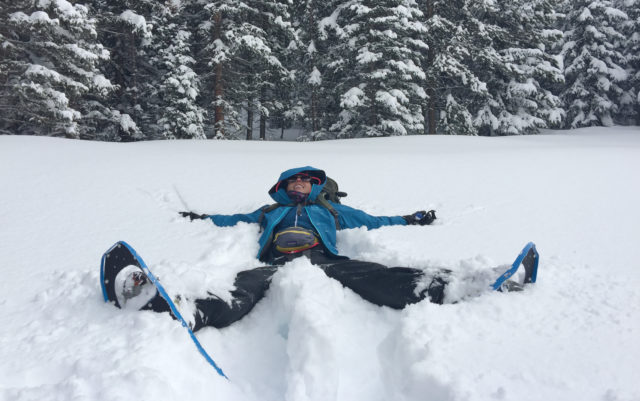 Lauren McCarthy and Patricia Melero were a mile deep in the backcountry of the White River National Forest when it began to snow. It was a light flurry at first, but as the flakes began to get fatter and started coming down in blankets, it became a full-on whiteout.

“Which doesn’t normally stop us,” Lauren says. So they kept on snowshoeing; following a packed trail toward the Polar Star Inn, one of Colorado’s 10th Mountain Division huts on the west side of New York Mountain.

Lauren and Patricia had packed light: a night’s food to cook at the cabin’s full kitchen, a few snacks for the hike up, just a couple of warm layers since the cabin had a fireplace and cast-iron stove, swim suits for the sauna, and their sleeping bags.

By all expectations, it was going to be an evening full of fun and exercise, fresh snow, fresh air, perhaps even romance — after all, you never know who else might be staying at one of the publicly available huts.

Sadly, for these two ambitious young adventurers, Mother Nature had other plans.

They had anticipated some weather — a little snow on a winter hut trip is no deal breaker, in fact, it should be anticipated. But soon the snowflakes were covering up their tracks and reducing visibility to an unsettling degree.

But things were fine. At least right up until they came to a fork in the path.

Lauren felt certain that right was the correct way to their destination. But Patricia, who had hiked the trail the previous summer, thought they needed to go left.

“We had a very detailed description of where to go,” Lauren says. “But we thought we had already made the left turn described in the directions.”

“I had a little mental dialogue,” Patricia says. “‘You know something,’ I thought, ‘You need to honor other people’s perspectives. Don’t always be so stubborn. Trust Lauren.’”

“And at the same time,” Lauren quips, “I was thinking, ‘Is Patricia right?’”

It was one of those classic moments that, in retrospect, seems so clearly pivotal — a whim, a miscalculation, a miscommunication. A moment that can change everything.

After a confused examination of their topographical map and light back-and-forth discussion of their options, they decided to take Lauren’s route and turned right.

But following trail markers in the winter, particularly during a snowstorm, can be a tricky business. Most of the 10th Mountain Division paths are indicated only with plastic blue diamonds nailed to pine trees, as the trail itself is often obscured by snow.

And as the storm worsened and light waned, those markers were becoming harder and harder to spot.

Time passed and so did the miles, and yet there was no sign of the Polar Star Inn. Considering their pace, they knew they should’ve already reached it, or at least they should be very, very close. They were sure of it. Still, the blue diamonds beckoned, so on they continued.

They knew they were following a 10th Mountain Hut trail, they say. They just weren’t sure it was the right one anymore.

“The whole time, as we kept hiking, it just felt wrong,” Patricia recalls.

Their disagreement at the fork started to weigh heavy on the air between them. Lauren, no doubt, didn’t want to be responsible for their getting lost; and the last thing Patricia wanted to tell her friend was, “I told you so.”

So, on and on they hiked, largely in silence — deeper into the wild and deeper into the night. By the time the light had completely faded to black and the temperature had sunk dangerously low, their fun weekend getaway had become a serious survival situation.

They were lost. Neither one knew whether or not to turn back and try to retrace their steps; they were afraid if they did, they would get lost even worse — and anyway, their tracks were no longer traceable, thanks to the blizzarding snow.

Maybe the Polar Star Inn was around the corner, they hoped. The again, maybe it was nowhere near them.

“I realized then that we were in danger,” Patricia says. “And I had this moment where everything just kind of overwhelmed me.”

Death by hypothermia, or frostbite, or both — though far from certain — was beginning to look more and more like a real possibility. Panic settled over the women, and Patricia says she had a minor breakdown. Lauren kept her calm, though, convincing her friend that the best way to stay warm would be to continue walking, even if they had to continue all night. It took Patricia a moment to collect herself, but when she did, they pressed on.

It wasn’t long after that when fate interjected.

Few of us have ever felt the kind of existential relief that Patricia and Lauren felt when, after hours in the cold, in a blizzard, lost and terrified, they happened upon a lonesome, fateful outhouse.

The door was cracked, the inside was partially filled with snow, but it had four walls and a door — perhaps the only such structure (besides their original destination) for miles. They had no way to be sure.

“I was so thankful,” Lauren confesses. “I’d never been so happy. I felt like there was someone watching over us.”

By the grace of some outhouse angel, they had found refuge. And they gladly took it. The two girls immediately started shoveling snow out from within, crammed inside and closed the door, shutting out the howling night beyond.

They were safe — though, not yet out of the woods.

What followed was, perhaps, the most miserable night of both their lives. The outhouse was far from sealed. A freezing draft snuck through the cracks under the door. They had nothing but a few meager snacks to eat, since most of the food they’d brought required a real kitchen.

But they did have a roof. And they had each other. And, while their sleeping bags were wet for lack of ground pads, and their spirits dampened for lack of hope, they were kept warm on some level by gratitude — a deep, unyielding thankfulness that the universe, or God, or simple dumb luck had provided them with the most unlikely of shelters through that heinous blizzard.

“If we hadn’t found that outhouse it would have been a different story,” Lauren says.

“We would have been in trouble,” Patricia agrees.

One cold and sleepless hour passed after the next. The only distraction from their misery: a few old episodes of The OA Lauren had downloaded on an iPad.

When the first rays of sunlight at last crept under the outhouse door, they were both wide-awake and waiting for it; partially delirious and really cold. But they were alive. And they were ready to get the hell out of there.

So, with the kind of sluggishness that only sleep deprivation on the brink of hypothermia can produce, they rallied, fastened their frosted snowshoes, zipped up their jackets with numb and trembling fingers, and plunged once more into the winter world outside — out of the fridge and into the freezer.

Finally, after miles of trekking, they came again to that pivotal fork in trail. And when they got there they ran into another group. It was the only other people they’d seen since they’d left town the day earlier. And, in a cruel twist of chance, it was a band of young men. Hunks, as the women describe — six of them — who had, naturally, spent a lovely evening relaxing and enjoying the amenities of the Polar Star Inn.

Talking to the men, Patricia and Lauren say they discovered that the trail was, in fact, a 12-mile loop; that from their outhouse they’d only been a stone’s throw from the parking lot; and from the fork, only a leftwards jaunt from the Polar Star Inn. They’d been on the right trail the whole time — they’d just taken all the wrong turns.

Shortly thereafter Patricia and Lauren made it back to their car. They drove down without incident and when they finally made it back to their respective residences, they did what any sane human would’ve in their shoes: They took showers and crawled into their beds, burrowing deep into the covers to catch up on lost sleep.

They were safe and warm and comfortable at last.