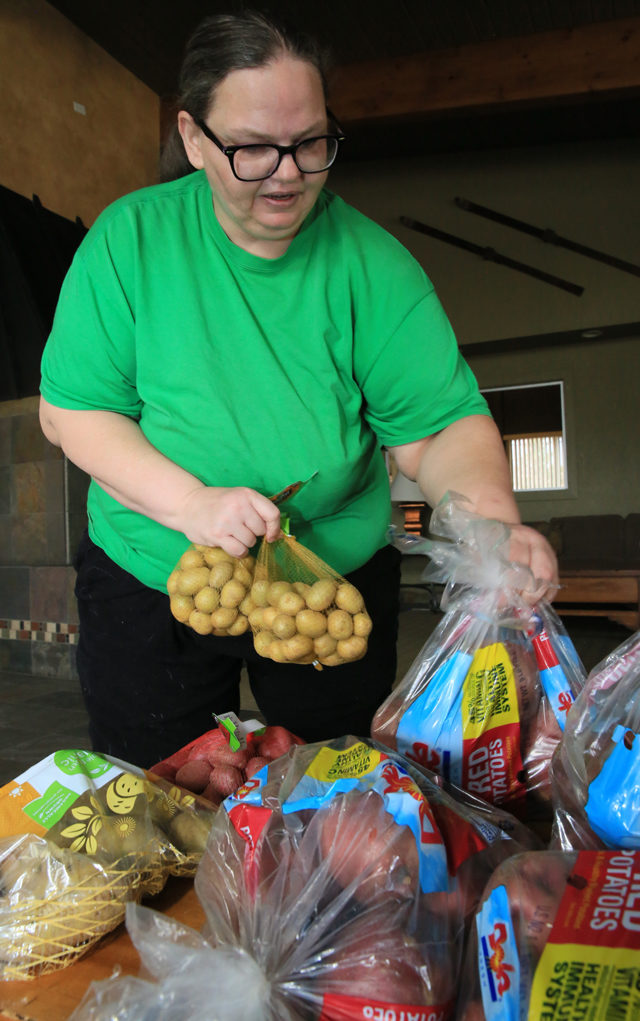 According to Wendi Calder, the mission of Boulder Food Rescue (BFR) is a winner all around:

Take fresh edible produce destined for the landfill or compost bin and get it to Boulder residents. Deliver it by bicycle to reduce any further negative environmental impact. Put volunteers in charge of distributing healthy food in their own communities to anyone who needs it.

“As soon as I heard about the program, I volunteered to help start it up at Tantra Lake, where I live,” Calder says. She is BFR’s Grocery Program Coordinator in her neighborhood.

Every Tuesday, food arrives from a local supermarket.

“I set up tables and sort out the food we receive and then welcome residents to the clubhouse to pick up food,” Calder says.

BFR puts out fliers to spread the word, especially to newcomers. “We don’t have any qualifications. If you’re in need for any reason, we help you out,” she says.

“We have about 20 to 25 residents a week and it’s steadily growing. We have a young couple in their 20s and college students and very sweet elderly ladies. I love being a support to them,” Calder says.

Local food banks do the essential work of distributing food to the neediest, but fresh produce has always been a hit or miss proposition because of the short shelf life.

Most of the donations are whole fruits and vegetables. “We see a lot of apples, mangoes, plantains and potatoes but it changes every week. Sometimes we get pre-cut packaged veggies and juices. Some of the produce is small or past the “sell by” date. It may be a little wilted or have minor blemishes. “It’s things you can trim off, nothing gross,” Calder says.

She knows the food because she and her husband use the program. Calder has been on medical leave from her job working in a deli at a local supermarket. She has worked in food and customer service for 20 years.

“I love to cook. I watch cooking videos trying to teach myself about obscure produce. What we get is really kind of random, so I want to help the residents figure out how to use it,” she says. She shares recipes from BFR’s recently published cookbook.

BFR empowers volunteers to find the best ways to feed their own communities. “Sometimes residents can’t make it to the distribution point, so we decided to start doing delivery. They call or text us and we let them know what we have received. One of us will drop it off,” Calder says.

Residents also share their wish lists. “It might be certain kinds of fruit or they have a child who loves fresh corn, but we let them know when we get those items,” she says.

Calder and co-coordinator Lia Arnesen, another local resident, have gone ahead and taken the next step. “We don’t want any food to end up as compost, so whatever produce the residents don’t take, Lia takes to other locations like Attention Homes and Boulder Shelter for the Homeless,” Calder says.

“I can’t tell you how grateful I am for being introduced to this program and this organization. All they want to do is support and help the community,” she says.

The current closings of Lucky’s Market stores in Table Mesa, Longmont and many other locations gave me flashbacks to the growth of so many locally born grocery stores. The Pearl Street Market (located where Cured is now) became the original Alfalfa’s Market (on Broadway), which grew into a regional brand. Crystal Market (which also opened where Cured is now) became Wild Oats Market, which expanded regionally and eventually swallowed up Alfalfa’s. Wild Oats Market was then digested by Whole Foods Market. Alfalfa’s Market reopened on Broadway and a second store opened in Louisville. Vitamin Cottage became Natural Grocers and has steadily grown for a half century. So it goes…

If Colorado had an official Taco Town, it would have to be Lafayette, which has a high concentration of authentic taquerias in a small geographic area. Consider Tacos Aya Yay, tucked away at 1206 Centaur Village Drive in a strip mall facing South Boulder Road. The menu includes burritos, quesadillas and tortas but the tacos are the main event. These are classic street tacos with two soft, griddled corn tortillas topped with griddled meats including chicken, carne asada, barbacoa and vegetarian nopal asada.

I tucked into buche (pork belly) and al pastor (pork with pineapple) tacos, which came with a great garnish of radishes, lime, grilled jalapeno, sauteed onion, jicama and potato. The condiment bar provided salsas for heat along with chopped cilantro and onions.

Tacos Aya Yay is across South Boulder Road from Taqueria La Esperanza and down the road from Los Gatos taqueria truck (225 W. South Boulder Road) and the nearby Taco Wagon at 503 S. Public Road. Lafayette is home to many other traditional, regional and Southwestern variations on Mexican fare. If you follow the taqueria tasting trail, be aware that seating (and beer) is limited at these places, but big flavor is not.

“We should look for someone to eat and drink with before looking for something to eat and drink, for dining alone is leading the life of a lion or wolf.” — Epicurus (circa 300 B.C.)