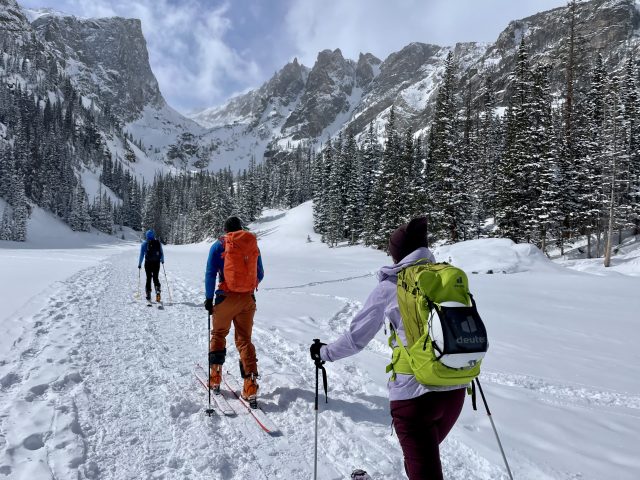 Every mountain guide has their niche. For Zach Lovell, it’s the Alaskan Range in south-central Alaska.

“It’s a mountain range that instills humility,” says Lovell, who has been guiding for 13 years, 10 of those in the Alaskan Range.

For those expeditions, Lovell takes clients (he calls them ski partners) in an Otter plane and they “basically land on this glacier somewhere in the middle of nowhere.” From there, he digs a base camp and makes a powder hound’s dreams become reality.

“Those expeditions have been a unique and very rewarding experience,” he says. “Not just for me, but for the people I’m guiding as well.”

Lovell loves what he does — he finds the mountains therapeutic, and wants to share that experience with people.

When he isn’t touring the Alaskan Range, Lovell is an International Federation of Mountain Guides Association-certified guide for Colorado Mountain School (CMS), based in Estes Park, where he guides trips and teaches backcountry skills courses to help people access those experiences on their own.

CMS has a variety of frontcountry and backcountry experiences and courses catered for skiers and adventurists of all levels from their home base in Estes Park to locations in Cameron Pass and the I-70 corridor. They also have a 2023 Alaska Range permit this year, which Lovell will guide.

This summer, CMS finished building a completely off-grid yurt as their newest backcountry base camp, mountain lodge and education center to service outings in Cameron Pass, just west of Fort Collins. Named the Seven Utes Yurt, it has a wrap-around deck, wood-burning stove and sleeping space for 16 visitors.

Winter programming will be offered out of the yurt for the first time this season. Parties can sign up for an education course, guided adventure or reserve the entire lodge. Located in State Forest State Park, there’s plenty of space for all sorts of winter activities like cross country skiing, remote snowshoeing and, of course, backcountry skiing.

Lovell says the combined factors of the varied terrain and great snow in Cameron Pass with CMS’ wide program options lets them meet the needs of any person with the yurt.

“Cameron pass is one of the best ski-touring options in the Front Range,” he says.

One of the classes to be taught at the yurt is the AIARE (air-ee) 1 avalanche course.

Lovell taught his first AIARE 1 avalanche course of the season Nov. 28-30, at CMS’ frontcountry base camp in Estes Park. The course is designed to help people make better decisions in avalanche terrain.

Alex Stroshine was one of the five participants in Lovell’s avalanche class. Stroshine wanted to learn about how to travel safely in backcountry terrain.

“Traveling on skis in the mountains is the best way to travel,” Stroshine says. “It’s for pure enjoyment and fun. It’s also a really great challenge, an absolutely stunning environment and the skiing is a blast.”

Stroshine, who works at an expedition school based in New Hampshire, says his goal is to eventually lead backcountry ski trips. With his first avalanche training course under his belt, he now has a better understanding of the risks that come with backcountry skiing.

“I think that before the course, I might not have had the appropriate amount of caution going into the backcountry,” he says.

The first day of class focused on the types of avalanches, what causes them and risks in avalanche terrain. The group went into the field during the next two days, analyzing nowpack, practicing avalanche rescue and working on tour plans.

Along with frontcountry courses like the one Stroshine participated in, CMS also offers classes on avalanche skills in the backcountry during three-day hut trips. The longer backcountry stay gives participants and instructors like Lovell extra time to remain in a backcountry learning space and to unplug from life away from the slopes.

“I just think it’s a bit of a quintessential winter experience,” says Lovell, “to just be able to hang out in that backcountry space with the skiing right out the hut or yurt’s back door.”

With those trips, guides get the chance to step away from teacher-student roles in the evenings and build stronger relationships with the group.

“We’re all just a group of humans enjoying the mountains together, and that can be really easy to feel and to appreciate in those hut trips,” Lovell says.

The guiding company is also implementing a new course series geared toward the less-experienced adventurer called the Fundamental Mountain Skills, which is available through the Seven Ute Yurt.

“Those courses were created to make the outdoors even more accessible,” Lovell says, “and to basically make or add some offerings that are really widening how many people can basically be traveling in the backcountry.”

From the Alaskan Range to the high slopes of Colorado, from hut to hut and from frontcountry to backcountry, CMS can prepare you for your next adventure.