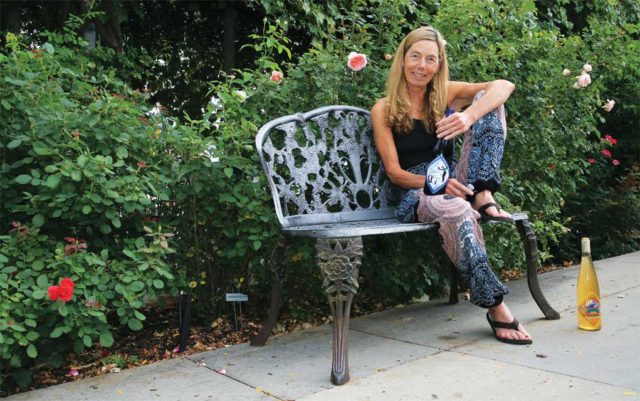 Marianne “Gussie” Walter does not do sweet wines at Augustina’s Winery in Nederland. She has her reasons, but that doesn’t mean she’s one of those stuffy wine snobs.

“If people ask me for a sweeter wine, I tell them to pick a wine of mine where they like the flavor profile and add some sugar,” Walter says.

Customers almost always gasp. “It’s your wine. Make it taste the way you like it,” she replies.

Whether you are sampling her Venus de Vino Rosé, Boulder Backpacking Wine or Wine Chick White, Walter doesn’t care about the shape of your wine glass, either.

“Go ahead and put my wine in a coffee cup. I use a stainless steel glass because I’ve broken so many wine glasses,” she says.

The winemaker’s refreshing disregard for the conventions and pretensions of winemaking is obvious when you read her wine descriptions. Normally, wine bottle text refers to subtle nuances, terroir and precise details of the vineyard and barrels. Her description for Bottoms Up White notes that it “goes well with Thomas Hardy novels (if you read too much Hardy you will need some wine… or antidepressants). Also works with Richard Thompson tunes.”

That’s the way Walter has approached winemaking since she bottled her first whites and reds in Boulder in 1997.

“It’s just wine,” she says. “You should enjoy it, have it with food and friends. I’m not sure that the wine should be a topic of discussion at the dinner table. There’s more important stuff.”

Raising a toast to science

Like many American-born winemakers of her generation, Walter’s first sip of wine was a gulp of Boone’s Farm Strawberry Hill.

“I was 14, and we snuck over to someone’s house to drink it,” she says. “It was sweet and sickening.”

Thus began her lifetime affinity for dryer, but not bone-dry, wines.

“The first good wine I tasted was probably in grad school,” she says. “I had mostly been drinking beer, and I finally tried wine. I thought: ‘I like the taste of this a lot better.’”

She started discovering affordable, easy-sipping wines from all over the world.

Walter is one of a coterie of former scientists, from physicists to nuclear engineers, who have opened breweries, wineries, distilleries and cideries in Colorado.

“A lot of geologists I knew were homebrewers. They liked to drink,” she says.

Walter started messing around with wine-making in 1989 and made a batch of “not very good” dandelion wine inspired by a famous Ray Bradbury novel. She started perfecting the process and sharing her wines with friends, who urged her to make it more than a hobby.

After resigning from the lab, she went to work for a winery in New Mexico, where she did testing and every other job required at a small operation.

She says she learned a lot about the craft and one important lesson:

“I hate picking grapes. It’s eight hours of back-breaking, hot work with biting insects. I have a lot of respect for the workers who harvest grapes.”

Making wines she can ‘mess with’

In 1997, Walter opened Augustina’s Winery in a North Boulder warehouse intending to make wine her way: less alcohol heavy, less sweet and more affordable. It was the first winery in Boulder County and one of a handful of women-owned wineries in Colorado.

“I like the chemistry. I do all the lab work, and I still do a detailed lab notebook. That way it’s easier to figure why something went wrong… or right,” Walter says.

Making only 5,000 to 6,000 bottles a year, Walter uses Colorado grapes from a handful of growers in Palisade and Hotchkiss with one exception: A female farmer in Burlington on the eastern plains grows the Vignoles hybrid white grapes Walter uses in her popular Harvest Gold wine. Walter describes Harvest Gold wine as good for sipping while “dissecting relationships (your relationships, your friends’ relationships, and the love life of people you’ve never met).”

She does not bottle wines with vintage dates and freely admits her signature wines might taste a little different from year to year. “It depends on the grapes that are available. I make table wines, which means that they can be from 7 to 14% alcohol. That way I can mess with it when I want but the labels stay the same,” Walter says.

When she says, “I made these wines,” Walter does not mean that she merely owns the company or that she is the winemaker. She does do those jobs, and everything else. She picks up the grapes at the vineyard, crushes them, stems them, bottles and labels the wine and cleans up… in addition to working in the tasting room.

“Most of wine-making is cleaning,” Walter says with a sigh.

Wine-making can involve working with large, heavy objects but Walter has designed workarounds and used smaller equipment that she can physically handle.

“I have a lot of things on wheels so I can do it myself,” she says.

She sometimes says she does it all because she doesn’t make enough to pay anyone, sometimes including herself.

“I also walked dogs. I cleaned a lot of houses, worked at a winery and a wine shop and for a caterer,” Walter says.

However, her one-woman approach also arises from personal honesty. “I make a bad employee, and I’m not a great employer. I’m cranky. I’m just better suited to working on my own,” she says.

That said, Walter notes she loves drinking the wine with people who stop by the winery. Her wines are only available there and at the Saturday Boulder Farmers Market.

Bringing the winery to the mountains

By 2016, Walter decided to move the winery to the mountains, where she had lived for many years. Augustina’s Winery is now appropriately located near the building that houses Nederland’s remarkable Carousel of Happiness.

“Nederland has a lot of fun stores and restaurants. I like the idea of there being surprises to be discovered in town,” she says.

The kind of folks who stop in the tasting room aren’t typically looking for a fruity merlot, just a taste of the local wine. “The women seem to really get the names and the labels,” Walter says.

There is a certain irony in her ultimate career path. Walter is the great, great, great, great niece of Carrie Nation, the legendary Prohibitionist who famously used a hatchet to attack saloons a century ago. Her targets even included an attempt to turn off the wine, beer and spirits in the mountain town of Cripple Creek. History notes that Nation’s raid was unsuccessful as residents defended their beverages.