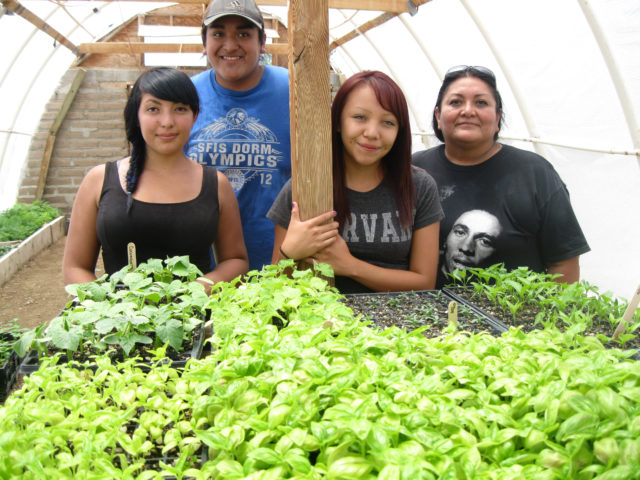 If there were a stereotypical image of gardening, it certainly wouldn’t be a disadvantaged teenager. But programs across the country are beginning to see the peaceful, prolific pastime as something that young kids are not only actively involved in, but also benefitting from.

The unconventional pairing of organics and juveniles peaked researcher Illène Pevec’s interest when she encountered a youth produce stand 10 years ago in Boulder. Cultiva Youth Project is an agriculture organization at a North Boulder community garden, where kids gain experience planting, tending and distributing the crops.

“They were so enthusiastic, so happy, selling me these cherry tomatoes,” Pevec says. “I thought, ‘I’m going to interview these young people.’ My intuition was that something changes in people when they’re gardening and I wanted to know how and why that happens.”

So Pevec traveled all corners of the country, visiting an array of youth gardening programs, interviewing more than 80 students. In doing so she found a reciprocation of benefits — not only are the communities gaining fresh produce, but the youth gain food education. Most importantly, though, the kids gain increased wellbeing.

“The communities benefit because they’re getting local, healthy food, organically grown with a lot of love and care and smiling young faces,” Pevec says. “And these kids are developing phenomenal environmental and social awareness and commitment to positive change in the community. They’re very proud of themselves.”

Through her research, she heard stories of personal growth cultivated in the gardens, from the Rockies to the Bronx, from Oakland to New Mexico. She shares these in her new book Growing a Life, a culmination of her inquiries into the psychological effects of the practical hobby.

“I wondered how people changed from this experience in terms of their emotional state,” she says. “The questions I asked were about all their senses: what they saw, how it smelt, how that made them feel. They were so touchingly open about how they felt in response to working with nature.

Hoping to capture the student’s experiences, Pevec says 85 percent of the stories are presented in their own words. “I really wanted the youth voice and not my voice,” she says. “It’s kind of like an oral history of young gardeners. It’s their voices who will convince people.”

Many of the programs Pevec visited were developed with diversion and distraction agendas for at-risk youth. Gardening helps these kids in a number of personal ways, giving them a positive outlet from the societal hardships they face.

When visiting a school gardening program in Oakland, for example, Pevec recalls being interrupted by a lockdown because of a nearby shooting that involved minors.

“For these kids, gardens are a way for them to do something sane and safe and beautiful and not be on the street,” she says.

In urban New York she observed the efforts of teacher Stephen Ritz, whose Ted Talk about youth gardening in the South Bronx inspired her to document the positive effects of gardening on teens who don’t have many positives in their lives otherwise. She particularly noticed how connecting to the natural world through gardening led to interpersonal reflection among the students. One young man reported it made him feel better than listening to angry rap. Another student said she really enjoyed the program because it reminded her of when her dad used to take her to the park as a little girl.

Comparable praises came from a similar program in a highly contrasting location. In New Mexico, kids were appreciative of their youth gardening program because it served as a way for them to continue local traditions.

“Their stories are about preserving culture,” Pevec says. “Food and land and culture are intimately tied.”

There are also the inherent physical effects of growing your own fresh sustenance. The inner city kids, who often spend more than 20 hours a week in greenhouses, changed their eating habits. Whereas they hardly ate vegetables before, they told Pevec they now snack on the crops as they’re working and have grown a liking for fresh tastes.

“I asked whether eating habits had changed for them, and a lot of the boys had lost 10 pounds,” she says.

Additionally, the kids get to see the fruits of their labor, quite literally. Everything from the gardening programs is going somewhere with a good cause: Cultivas’ crops are sold at the Boulder Farmers’ Market or given to homeless shelters; yield from Oakland’s program is sold to fund the organization; the products of programs in Carbondale and Glenwood Springs are used in the school lunch program.

The nonprofit work reflects a growing preference for local food, after years of corporate processing plants made community farms second choice to convenience.

“With school lunches the challenge of making that good food is enormous,” Pevec says. “It used to be where everything was cooked from scratch but fast food purveyors took over lunchrooms in the ’70s because Congress was trying to save money.”

“They let pizza and tacos and frozen food into lunchrooms and they’re trying to change it back now,” Povec says.

And it seems as though the general population is also gravitating toward locally-grown food. Recent studies, like one done in 2014 by market intelligence company Mintel, reveal 21 percent of people say they would pay more to buy local, valuing both the food quality and economic stimulation.

As the stories in Growing a Life demonstrate, youth gardening programs are a holistic way to both meet the growing demand for local produce, while providing beneficial outlets for students.

As Povec says, “People trying to change food are people who are looking at the big picture of how food affects life and learning.”