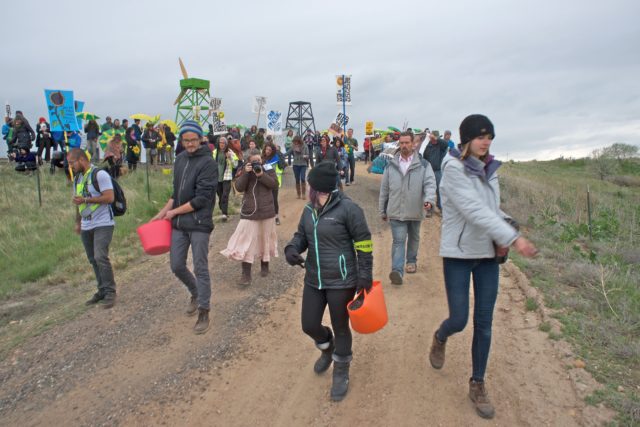 Who you gonna call? The answer of course depends on who you are. If you’re the oil and gas industry and you need someone to help you out with all those pesky protesters, you call Republican Sen. Jerry Sonnenberg from Sterling, the president pro tem of the Colorado Senate.

You may recall Sen. Sonnenberg as the guy who pushed the two pro-oil and gas initiatives in 2012, the ones Gov. Hickenlooper used as leverage in his infamous trade with U.S. Rep. Jared Polis that saw a quarter of a million signatures that would have given Coloradans a vote on fracking tossed into the trash at the last minute. Yep, that Sen. Sonnenberg.

It’s no secret that environmental activists are getting more active against the oil and gas industry these days. Whether it’s peacefully disrupting public land auctions of oil and gas leases, occupying a drill site near a public school or the nearly year-long standoff at Standing Rock in North Dakota to stop the Dakota Access Pipeline, direct actions have been increasing in number and scope, and the oil and gas industry and its political pals have taken notice.

In the current struggle to save the planet from global warming and protect public health and property values from one of the world’s dirtiest industries, Colorado is on the front lines. As a result, the industry has been working overtime to figure out ways to discourage activists’ efforts against it. Oil and gas companies and their front groups have spent tens of millions of dollars in the state on advertising and lobbying efforts to defeat citizens’ initiatives designed to allow communities to better control oil and gas extraction in their neighborhoods or increase the distance between polluting extraction operations and homes, schools and hospitals. But apparently that hasn’t been enough to dissuade the activists.

So now a new approach is being floated by industry in the form of a Trojan Horse of a bill being pushed to the gate by Sen. Sonnenberg. You could call it a “if you can’t beat them, put them in prison” approach.

Sonnenberg has introduced Senate Bill 17-035.  He says the bill is needed to deal with potentially death-causing tampering with equipment associated with oil and gas gathering operations. Supposedly, we need it because, one would assume, we’ve seen so many death-causing incidences attributable to such tampering. But that would be wrong because we have seen no such deadly acts of sabotage — none, zero, never happened.

Colorado already has a law making it a pretty serious crime to tamper with equipment associated with oil or gas gathering operations. If you get caught currently, you face a class 2 misdemeanor that can land you in jail for a few months and/or get you fined $250 to $1,000. In reality, most people who get caught are simply charged with criminal trespass or criminal mischief. So Sonnenberg and the industry’s point of view is that such light penalties are hardly a deterrent to activists. And they’re probably right about that.

Monkeywrenching a gathering system is considered a form of protest. The potential jail time and fine are a risk, but some people fighting for the future of the planet are clearly willing to take that risk. That is why we already have a law against such activity in place. I think a sane person not beholden to the oil and gas industry might argue that the current penalties fit the crime pretty well. And after all, that is supposed to be the goal of our justice system. We don’t cut off the hands of people who shoplift and we don’t make protesting against global warming subject to the death penalty, even though I’m sure such over-the-top punishments would put an end to such behavior.

Sonnenberg’s proposed bill would alter the wording of the existing law to enforce more draconian punishments on oil and gas activists. And a close reading of the new bill shows it to be misleading and possibly applicable to other types of peaceful protest.

If passed, Sonnenberg’s bill would turn the exact same actions from a class 2 misdemeanor into a class 6 felony, carrying up to an 18-month prison sentence and a fine of $100,000.

One would assume that if, as he claims, his primary concern is to prevent deadly accidents caused by activist tampering, Sonnenberg would make such death or injury a required tenet of the new bill, but it’s not.

And it gets worse.

The original law also states, “Any person who in any manner, without the consent of the owner or operator, knowingly alters, obstructs, interrupts, or interferes with or attempts to alter, obstruct, interrupt, or interfere with the action of any equipment used or associated with oil or gas gathering operations commits a class 2 misdemeanor.”

Again, the new bill adds the words “or places another in danger of death or serious bodily injury commits a class 6 felony.” This is particularly troubling.

By definition, any truck used to carry oil or condensate, or even any vehicle that might be used to service a well or production platform, would qualify as being “associated with oil and gas gathering operations.”

And because Sonnenberg has used the word OR instead of AND, any peaceful protestor who blocks access to a well road or slows down trucks carrying oil could become subject to 18 months in prison and a $100,000 fine.

Why not just cut off our hands?

Sonnenberg’s bill is designed to kill off peaceful protests by giving the oil and gas industry and law enforcement a giant stick. It’s clearly not about saving lives. The new bill would also allow “victims” to sue individual protestors on top of the already harsh penalties being suggested. One can only assume that oil companies are the “victims” when the road to a wellsite gets blocked by protesters.

Sonnenberg’s bill will get its first hearing on Feb. 16 in front of the Senate Agriculture, Natural Resources and Energy Committee. It just happens Sonnenberg is the committee’s chairman.

Folks need to get involved and stop this bill before it gets in front of a bunch of politicians controlled by the oil and gas industry.