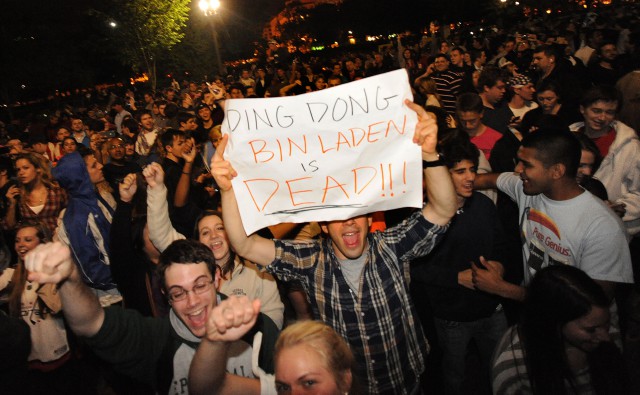 President made the dramatic late-night announcement Sunday from the of the , ending the long, elusive international manhunt for the leader of the terror organization responsible for the , attacks.

“Justice has been done,” Obama said in a 10-minute address shortly before midnight.

Bin Laden, perhaps the most reviled man in the eyes
of Americans, and much of the world, also was sought for the 1998
bombings of U.S. embassies in east .

A small team of U.S. operatives killed bin Laden Sunday in Abbottabad, , in a suburb about 35 miles north of , in a helicopter assault on the massive, heavily secured compound where he had been hiding. Abbottabad also is home of the — the equivalent of West Point in the U.S.

Bin Laden was shot dead, along with a man believed
to be one of his adult sons. His most trusted courier also was killed,
as was the courier’s brother and a woman that one of the men tried to
use as a human shield, senior administration officials said. The U.S.
team took custody of bin Laden’s body and confirmed his identity, Obama
said.

The president said a possible lead to bin Laden’s
whereabouts emerged in August, but took “many months” to run down. He
determined last week that there was enough intelligence to take action,
he said and gave the order at to take bin Laden.

Celebratory crowds flocked outside the gates of the
late Sunday and into early Monday, waving American flags and singing
the national anthem. Lawmakers from both political parties praised U.S.
intelligence, armed forces and Obama, even as they said it didn’t end
the threat from and Islamic terrorism.

The
woke up to the news of bin Laden’s death, which broke around the time
of the dawn Islamic prayer. Arabic-language channels interrupted their
broadcasts with the news. Al Jazeera’s Arabic channel juxtaposed live
footage of the celebration outside the in with archived video of a serene, smiling bin Laden at a wedding.

“
is not and never will be at war with Islam,” Obama said. “Bin Laden was
not a Muslim leader. He was a mass murderer of Muslims. His demise
should be welcomed by all who believe in peace and human dignity.”

Only U.S. personnel were involved in the raid, and
Obama’s decision to launch it wasn’t shared with any other country,
including , whose most powerful intelligence agency, the , has long been suspected by U.S. officials of maintaining links to extremist groups close to .

One senior administration official, who spoke on
condition of anonymity as a matter of policy, indicated that the U.S.
was pursuing with the Pakistani government the question of whether any
Pakistani officials were aware of bin Laden’s presence. “We are very
concerned that he was inside ,” he said.

There was no immediate move to raise the national
terror-alert level in the U.S., although some politicians expressed
concerns. Rep. , R-, a freshman lawmaker, said on Twitter: “We must be ready for retaliation from Islamic world.”

Bin Laden has been the target of history’s most
intense international manhunt, an operation that’s focused on the
remote tribal areas of and neighboring .

While bin Laden’s death will represent a major blow
to the international terrorist network that he led, U.S. officials have
long said that it will not end the threat of Islamic extremism because has metastasized into lethal branches based in and , and has inspired militants around the world.

Bin Laden’s death also represents a major boost for
Obama coming as he struggles with an uncertain economic recovery and
mixed public sentiment about the U.S. approach to civilian uprisings in
through the and . Even as Obama jabbed in a domestic politics monologue at Saturday night’s celebrity studded dinner, he knew the mission to take bid Laden was under way.

But bin Laden’s death is unlikely to alter the course of the insurgency in neighboring , where U.S. troops remain at war and where has been playing a secondary role to the and allied militant groups.

Vice President notified several lawmakers by phone Sunday evening. Sen. , R-, said he guessed why Biden might be calling him. “Did we get the bastard?” Graham asked, and Biden responded: “We got him.”

Graham, the only member of to have served active duty in and as a colonel in the Air Force Reserve, said bin Laden’s death was deeply satisfying.

“The message of this event is that if you choose to
do harm to the American people and try to destroy our way of life,
there is no place to hide and no passage of time will keep you safe,”
Graham said.

On Arabic television, experts were divided about the impact on the
terrorist network. Some said the “martyrdom” of bin Laden could win new
recruits and inject new life into an organization that had grown
increasingly irrelevant, especially in the wake of Arab revolts in
which ordinary people — not Islamist groups and not foreign governments
— demanded greater freedoms from authoritarian governments.

Other commentators, however, said
already had evolved into a mostly leaderless group that’s loosely
organized via the Internet with self-declared “members” acting
independently around the globe.

( in ; special correspondents in , and in ; and , and in contributed to this story.)

Visit the on the World Wide Web at www.mcclatchydc.com.