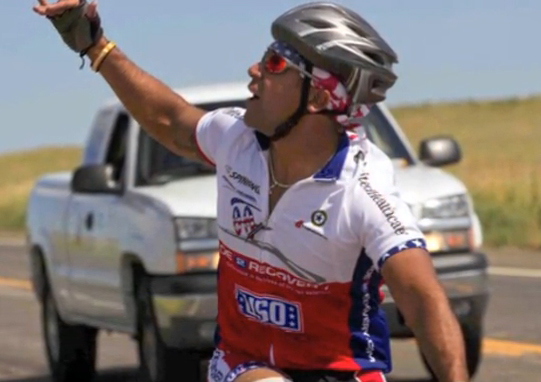 Michael de Yoanna, an award-winning reporter and documentary filmmaker, is on deadline again. This time, he’s raising money to complete his project The Winding Road to Recovery, a film that will chronicle what happens when troops return home from war injured. Some have turned to cycling to help in their recovery process, and de Yoanna’s film will follow a handful of soldiers as they participate in a series of road rides that starts at Arlington National Cemetery on Memorial Day and finishes in Virginia Beach.

In de Yoanna’s words, “This documentary not only highlights the struggle of wounded warriors coming home from brutal wars, it will show that with every crank of their pedals they are deeply human and alive, not just surviving, but thriving.”

The project must raise a total of $9,100 by Thursday, May 12. As of May 9, the project had raised $6,300. In an exclusive interview, de Yoanna tells Boulder Weekly about the project.

Boulder Weekly: What motivated you to take on this project?

Michael de Yoanna: I’ve been a news reporter for a decade, specializing in investigative journalism. In 2005, while working as a reporter in Colorado Springs, I began to notice the toll that the wars in Iraq and Afghanistan were taking on soldiers returning home. One of my neighbors, a soldier, went out drinking with me and admitted he was really having a tough time with PTSD. Then I met more soldiers and finally made it my goal to meet at least one new soldier a week. I’ve kept up with that goal (or exceeded it) to this very day. I’ve met hundreds of soldiers. Too many of them are struggling with the wounds of war, particularly the hidden wounds, such as post-traumatic stress disorder and traumatic brain injuries. I’ve reported in several investigations for national and local news organizations on cases where soldiers facing great adversity were misdiagnosed, most notably for Salon.com, where an investigation found that the Army’s health care system was so broken that it failed to catch suicides and overdoses that seemed preventable. These are fallen soldiers whose lives were lost in the war, many of their mothers believe. So many broken-hearted mothers have come forward to help me in my news reports. It makes me sad to think of it now.

Last year, I reported for KUNC radio that a soldier with an apparent mild traumatic brain injury was nearly discharged without the right diagnosis and proper benefits. [That story has won the regional Edward R. Murrow award for investigative reporting and could be seen as a companion piece to work on the Warrior Transition Units done by the New York Times and National Public Radio.]

BW: How did you find out about veterans who are using cycling to help recover from their wounds? Are you a cyclist yourself?

MD: At the same time I was reporting that story [for KUNC], I also learned that some vets were turning to bicycling to recover from the wounds of war — from PTSD to lost limbs. It’s an amazing group called Ride2Recovery. They’re a nonpartisan group taking the difficult and challenging narrative of injured troops and turning it into a story of hope. I rode with a large cadre of veterans through Colorado to learn about the ride (with about one month after my first time on a road bike — clicky shoes, Lycra and all!). Besides becoming an obsessive road cyclist (I’ll be riding in Colorado a lot this summer), I was so inspired that I decided I wanted to make a film. I aim to show the other side of The Hurt Locker and Restrepo. Cycling, it turns out, is a near-perfect metaphor for the ups and downs of a soldier’s recovery process.

BW: How did you reach out to the veterans you will be filming?

MD: I’ve spoken with a few riders over the phone (and I met others last year). It takes a lot to earn the trust of veterans. We’re talking now and we’ll be doing much more talking, on film, when I begin shooting on location at a ride that begins at Arlington Cemetery on Memorial Day weekend at the end of May. I don’t want to name the subjects now, but some are nearly household names. Let’s leave it at that. After the ride, I’ll check in with the soldiers in their hometowns, chronicling the days when they’re on their own, telling their personal stories.

BW: What is the main message you hope to show with The Winding Road to Recovery?

MD: What I hope to accomplish with this film is to tear down the whole mythology that soldiers — or anyone for that matter — is superhuman. We’re all human beings, with our particular problems as well as our most sincere dreams. Throughout history, war, unfortunately, is a major theme. It seems every generation has had a war since well before the time of Odysseus. I’ve noted that many American soldiers struggle when they return home after seeing the horrors of war. The neat green lawns and gardens and 4th of July picnics are such a contrast to what they saw in Iraq and Afghanistan. They have been changed by their experiences and now must build new lives. They must come home in very profound ways.

BW: Who do you think should see this film?

MD: I know that many Americans don’t know a veteran, so they’re not necessarily invested, if you will, in the plight of soldiers. Some Americans have just been too busy enjoying the good life here to think much about all those troops that signed up for the service after the 9/11 terrorist attacks a decade ago. There are other reasons some Americans haven’t tuned into the plight of troops returning home. So those are the people I want to invite to see this film when it is done. I hope it will spark a great outpouring of compassion and reconciliation among Americans who have not themselves come to terms with the wars fought in their name overseas.

BW: What have been some of the biggest challenges you’ve faced with this project?

MD: My number one challenge right now is funding. I have only until May 12 to get funding in place, and I’m doing it grassroots style online so that I can keep my vision intact and unfettered. I’m raising money on Kickstarter.com. In the first four days, I reached one-third of my $9,100 target amount. Now I have less than two weeks to raise the rest, and if I don’t, everyone who pledged money gets a refund and I don’t get anything. I’ll be scrambling if that’s the case, but I’m confident I’ll make the money. And yes, the amount is small. But I can make the documentary on this amount. It will be short. However, there’s already talk from people I know in the film industry of using this funding as a springboard to find funding for a much larger project, and I’m excited about that possibility. Ideally, it will either air on major cable or public television or go the film festival circuit. It’s all very exciting.

Right now, everyone has to give, give, give — especially if you know me and my work. There are many individuals and companies donating right now. If you give at certain levels, you get your name in the credits. Some are giving in the memory of a fallen soldier they knew, which only makes me work harder and emboldens me to give me more than I’m asking. Much more. Get me there.

For more information or to make your own donation, visit http://www.kickstarter.com/projects/mdy/the-winding-road-to-recovery.