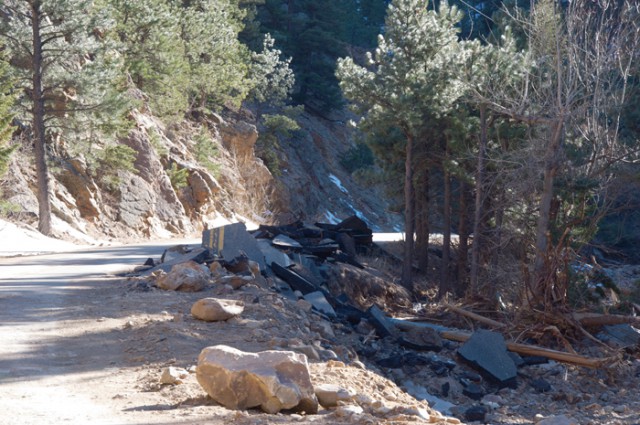 Ballot Issue 1A will ask voters whether they want to raise sales taxes “18.5 hundredths of 1 percent for the purpose of paying for the recovery from the 2013 flood.”

The biggest part of repairs is rebuilding washed-out roads, something that is estimated by the county to take five years and cost more than half of the $217 million in total estimated recovery costs. Even with federal disaster funds, there would still be an estimated funding gap of $56 million.

But here’s the tricky part: that’s just if costs don’t go up.

“Any estimate that we had at the beginning of the process is understated because the costs have continued to rise,” Domenico says.

Those last six months are just the tip of the iceberg. Since 2003, asphalt prices have increased more than 200 percent. That’s more than inflation, more than labor, more than concrete, and even more than bacon, which has gone up 41 percent in price since 2012.

“The Federal Highway Administration found that highway construction and maintenance costs nationwide grew approximately three times faster from 2003 through 2006 than their fastest rate during any three-year period between 1990 and 2003, substantially reducing the purchasing power of highway funds,” the Portland Cement Association wrote in its 2012 Market Intelligence Report, The New Paving Realities: The Impact of Asphalt Cost Escalator Clauses on State Finances. “Since that report, the rate of increase has accelerated, with highway maintenance costs rising at an 8.4 percent average annual rate during 2007-2010, compared to 6.3 percent during 2003-2006. These increases are largely the result of escalation in the costs of materials used in highway projects, such as steel and asphalt, and reflect structural, not transitory, economic changes.”

“Asphalt binder prices fluctuate greatly and are somewhat correlated to petroleum prices,” the Colorado Department of Transportation wrote in its 2014 Transportation Deficit Report.

While the price of both oil and asphalt have stabilized somewhat in the last two years, it was only after spending the last decade blowing up state and county budgets nationwide.

A 2012 report from Engineering News Record found $70 million in price overruns for 2011 alone.

“We spend approximately 50 percent more today to get the equal amount of work performed in 2001,” Jerry Wray, Ohio’s Department of Transportation Director told ENR, adding that taxes were unable to keep up with the rise in materials costs.

Boulder County Commissioner Elise Jones says a big part of that price increase locally is that the county is competing with itself.

“There’s so much rebuilding happening and the economy’s recovering, so construction is just taking off,” Jones says. “So there’s only so many contractors out there and they can charge much more than they could a year ago.”

“Overall pavement conditions on the system have been deteriorating since peaking in 2005, and that trend is expected to continue in the short term,” CDOT wrote in its 2014 Transportation Deficit Report.

The reason why is that Colorado has a lot of roads projected to pass their lifespan in the next couple of years, and that means a lot of repair costs all at once.

“Against the projected revenue allocation for the Surface Treatment program for the next 10 years, there is an anticipated deficit of about $9 million, with the entire deficit accumulating in fiscal years 2015 and 2016,” CDOT wrote.

But don’t worry. CDOT predicts that it should be able to get Colorado’s roads back to their current condition by 2027.

Only problem there? Even without flood damage, the roads currently suck.

A 2013 report from the Reason Foundation, a Libertarian think tank, found that Colorado’s roads ranked in the bottom 10 of the nation, both for performance and efficiency, something the report credited primarily to the poor upkeep of rural arterials.

The American Society of Civil Engineers wasn’t as kind. It found in its 2013 Infrastructure Report Card that 70 percent of Colorado’s roads are “in poor or mediocre condition,” giving the state’s roads a D.

ASCE also noted that Colorado’s gas tax has not been raised since 1992, which happens to be the year that TABOR was voted in.

More than just a rougher ride, poorly maintained roads are responsible for all sorts of ills. ASCE’s report card estimated that driving on roads in need of repair cost Coloradans $1.034 billion in repair and operating costs for their vehicles, approximately $287 per motorist. AAA estimates that potholes alone do around $5 million in damage to Americans’ cars each year.

“[The State of Florida] studied vehicles traveling on I-95 and found that riding on rigid pavements [cement] consumes 3.2 percent less fuel than riding on flexible pavements [asphalt] for passenger vehicles and 4.5 percent less fuel for loaded tractortrailers,” Portland Cement Association wrote on its blog in February of this year.

It should be mentioned that much of the information the Portland Cement Association puts out is intended to sway construction away from asphalt and towards concrete, which is a smoother, more rigid material. But their motives aside, a rougher road does real harm and leaving them in their current condition only makes them harder to fix later on.

The issue is further complicated by the fact that federal repair funds come in the form of reimbursements, meaning the county will have to put out the repair costs up front.

“We’ve spent over $40 million already and gotten back less than $4 million from state and federal coffers,” says Jones. “That’s an illustration of the great lag that exists.”

That’s why County Commissioner Deb Gardner bluntly says even the $56 million that would be raised by Ballot Issue 1A won’t be enough to recover.

“We haven’t built a single permanent road yet, and when you get in that design phase and engineering phase and the reality on the ground of, oh well no, the creek needs to move here and the road needs to move here and that means we need to blast into the mountain over there,” Gardner says. “I think at our best guess the costs will more than likely go up than go down.”