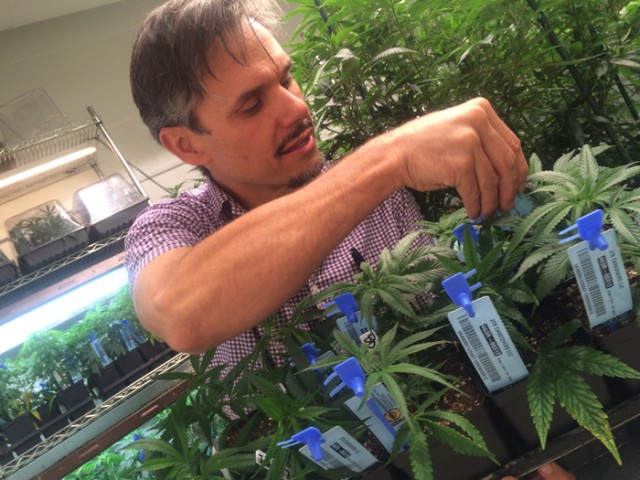 Working in the weed industry sounds awesome, in theory. Maybe you could be the next marijuana millionaire. Or at least get lots of free samples.

But cannabis professionals say their days are consumed by endless data-entry, software malfunctions and anxiety.

“This industry has been regulated into absurdity,” says Read Spear, author of Marijuana Cultivation Reconsidered and consultant to cannabis entrepreneurs. “It’s like you’re handling nuclear material.”

Spear disputes the assumption that everyone in the industry is rolling in profits. The margins have shrunk, he says, because of the taxes and fees.

“There are better margins on dietary supplements,” he says, “and probably, I don’t know, dog food.”

It started out as a more equal-opportunity industry, he says. You could become a caregiver without much startup money. Now, you need a couple million dollars to start a marijuana business. Spear, who sold his local dispensary in 2012, blames politicians who have misread what their constituents want.

Gov. John Hickenlooper, who has long opposed legalized marijuana, publicly promised to regulate it to death. Today, marijuana businesses face a regulatory environment unlike any other.

“I wish there was a little more acknowledgment that everybody’s trying,” says Evan Anderson, owner of 14er Holistics.

Earlier that day, Hickenlooper had called recreational marijuana “reckless” during a campaign debate. This surprised marijuana industry leaders Hick had been hitting up for donations.

But his remarks irked marijuana professionals, who believe Hickenlooper’s own industry (alcohol) could be labeled more “reckless” than theirs.

John Caraluzzi, an owner of Trill Alternatives, says his employees spend almost 50 hours a month documenting plant waste. Alcohol producers, he notes, don’t have to document every drop they spill. He mentions a local brewery with a neighboring warehouse.

“They’ve dumped malt out back,” he says. “If we did that with our plant waste, I’d be in jail tomorrow.”

Plant waste is just one step that growers must document on METRC, the software formerly known as MITS (Marijuana Inventory Tracking System). All Colorado’s marijuana businesses have been required to use this system since December 2013.

The Marijuana Enforcement Division (MED) had failed to develop the “seed-to-sale” tracking software by 2011, so they put out a request for proposals. Franwell, a company that worked with agricultural supply chains, won the $1.5 million contract.

Now Franwell is making a killing, according to industry insiders.

Colorado’s hundreds of marijuana businesses must each purchase monthly software subscriptions and buy all their “tags” (which have RFID chips or barcodes) from Franwell. Plant tags cost 50 cents each. More than a million have been sold, according to the company’s website.

You need these tags to do anything, says Trill grower Josh Steele. One time, a Trill manager forgot to order tags.

“He no longer works for us because of that,” Caraluzzi adds.

It’s a relatively new problem: I can’t sell these pounds because I don’t have the right stickers.

The growers at Trill seem more upset that the tags aren’t recyclable. Even after you’ve killed that plant and documented its death in METRC, you can’t reuse the plant tag, says gardener Shawn Rodemeyer. And there’s no alternative to their single-use tags, since Franwell won this exclusive contract from Colorado.

You can’t just throw the old tag away, Caraluzzi explains. That could trigger a huge investigation. He recently spent hundreds of hours embroiled in such an investigation, where it turned out no one was at fault.

As if that wasn’t enough, the tags are also from Florida.

“That was a slap in the face,” says Anderson. “It would’ve been more appropriate to give the contract to a Colorado company. We’re a proud state.”

For an industry that’s all about our local economy, small business and being green, it seems almost unbearable for some Colorado marijuana businesses to be forced to support an outof-state corporation with a monopoly on its unsustainable products.

“Why are we sending money to Florida?” Caraluzzi asks.

When a harvest is finally packaged and tagged, and all the packages entered into METRC, and the transfer logged with the right combination of 24-digit package numbers, and everyone is done shouting obscenities at the computer, you can move the product from the warehouse. Just enter the car it’s traveling in, the roads it’s taking, and the driver, and then hope that the system doesn’t freeze and you have to start all over.

No one is particularly grateful to Franwell for storing this information. Before Franwell came along, everyone used point-of-sale (POS) software. Now they enter everything doubly, in two separate sets of software, because METRC doesn’t provide POS software.

When the product finally gets to the store, other employees have to scan barcodes, enter 24-digit numbers and worry about how many packages are in a transfer and how many units are in a package. The tracking and worrying doesn’t stop until the very last gram is sold.

“We’re really not happy that it’s not supporting Colorado, and that it’s not eco-friendly,” Caraluzzi says. “That’s not Colorado to me.”