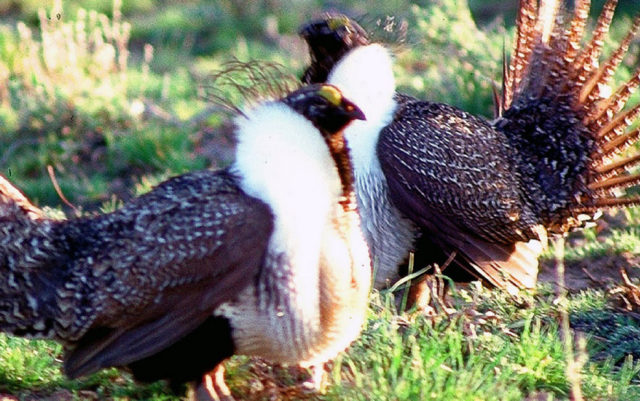 In September 2015, when former Secretary of the Interior Sally Jewel announced that sweeping collaborative conservation management plans would save the greater sage-grouse from an endangered species listing, Western governors, landowners and local governments declared it a “wildlife win.” Conservation groups and others, however, argued the management plans didn’t go nearly far enough to protect the bird, a sensitive species whose vitality indicates the overall health of the Western sagebrush habitat spanning 11 states, including Colorado.

Now, under the Trump administration, the Department of the Interior (DOI) is reviewing the federal Bureau of Land Management (BLM) plans and announced in early August its intention to revise them based on recommendations provided by the hand-picked Sage Grouse Review Team. But critics argue the review process has not been adequately open to the public, and the proposed changes cater to the oil and gas industry to the exclusion of other important stakeholders.

“All of this is being done behind closed doors,” says Jayson O’Neill, deputy director at Western Values Project, an advocacy organization based in Montana that promotes a balanced approach to energy development and public lands conservation. The group has been critical of Trump’s Secretary of the Interior Ryan Zinke (from Montana) and others at DOI from the beginning of the Trump administration.

“You can say into a mic that you’re going to have open public process, but really your actions speak louder than words,” O’Neill says.

He’s concerned by the apparent influence the oil and gas industry had over the Review Team’s recommendations. When Western Values Project analyzed Zinke’s Aug. 7 directive, most of the recommendations more or less mimic the points laid out by the Western Energy Alliance, an industry organization representing more than 300 oil and gas companies.

In a July 19 letter, Kathleen Sgamma, president of the Alliance, points out the current federal management plans limit oil and gas development in the West, contrary to Trump’s executive order, “Promoting Energy Independence and Economic Growth.” She also outlines how the sage-grouse management plans limit energy development with “overly burdensome” regulations, such as large noise and mating buffers, density and disturbance caps, as well as “overly broad” definitions of priority habitat areas and conservation gains.

“We’re glad to see that the Department is moving forward with changes to the way the sage-grouse plans are currently being implemented, but more importantly those plans themselves need to be amended,” Sgamma says in an email statement. “It will take many months if not years to amend the plans, and the sooner the Interior Department recognizes the need to do so and gets on with it will those plans effectively protect sage-grouse without needlessly killing jobs and economic opportunities.”

But for O’Neill, these recommendations tip the balance in the industry’s favor to the detriment of other stakeholders who contribute to the Western economy.

“To throw those (collaborative plans) out the window just for one industry, one economic sector in the rural West is short-sighted,” O’Neill says. “It risks, really, these rural economies and what little diversity they have left, and having their ranch and ag communities and recreation be part of our public lands portfolio.”

“A lot of people are concerned that they didn’t have a seat at the table,” says John Swartout, rural policy and outreach director for Gov. Hickenlooper. “Our local governments that are in the range in Colorado feel the same way.”

During the long planning process that led to the unwarranted listing decision from the DOI in 2015, the Hickenlooper administration worked with the BLM, state agencies, local governments and other interest groups in developing the Colorado Plan to protect the sage-grouse. A BW investigation at the time (See “Oil and grouse,” July 16, 2015) found the language in the plan vague and likely to allow continued oil and gas development in the sagebrush habitat. And while Hickenlooper initially objected to Zinke’s review of the plans, in the end Swartout says the DOI “did include the states in the review” before the recommendations came out, and the state will work to make sure all stakeholders are included in the process moving forward. Furthermore, he says, it’s still unclear exactly what direction the DOI will go in amending the management plans given the “full range of options included in this review.”

“If there are things that can be modified in our plan to make that stronger, we’re open to that,” Swartout says. “But what we’re not open to is weakening these plans so that their purpose and conservation intent is somehow deluded and not as effective.”

But others see the review process differently.

“The previous plans had loopholes that you could drive a truck through. And they’re taking advantage of that to create loopholes that you can fly airplanes through,” says Jeremy Nichols, climate and energy program director at WildEarth Guardians, one of several conservation organizations currently challenging the 2015 management plans in federal court. They argue the plans fail in their conservation approach to properly save the sage-grouse, as populations continue to dwindle. That’s to say nothing of the Trump administration’s potential changes to the plans, which lend credence to conservationists’ critique of the collaborative plans and those who prevented the bird from being listed.

“They thought it would be the most politically expedient way to solve the problem and what they did is they threw the grouse under the bus and now we’re left with Donald Trump.”

Western Values Project has filed an open records request asking for emails between DOI officials and industry representatives from a variety of groups such as the Colorado Oil and Gas Association, Western Energy Alliance and others to see who influenced the review process, since many other stakeholders do not feel represented.

“We’re trying to figure out really what other meetings took place and whether they took or had other input from other industry organizations, oil and gas lobbyists,” O’Neill says. As of this Sep. 13, Western Values Project hasn’t received a response from the DOI, although the agency did acknowledge it received the request.

“We’re hopeful that the Department of the Interior understands that the public and the stakeholders involved in this have a right to see the public documents and how these decisions were made,” O’Neill says.

If they don’t get a response within the time line set forth by the Freedom of Information Act, O’Neill says Western Values Project will file suit against the DOI.

By preventing an endangered species listing, the intent of the original management plans may have been to balance conservation of the bird with economic development, but the plans also left plenty of room for future administrations to allow wholesale energy development in the species’ most critical habitat. And while the state, under Gov. Hickenlooper, waits to see how this all plays out, the sage-grouse continues to be threatened, jeopardizing the West as we know it.

“Here it was, the great compromise, and that’s not withstanding the pro-fossil fuel push from [the Trump] administration,” Nichols says. “For a lot of folks who think taking the middle road is a key to success, our hope is that it’s a wake up call for them. There’s no middle of the road with this administration. They want it all and they’re going to take it all unless we stand up to them.”