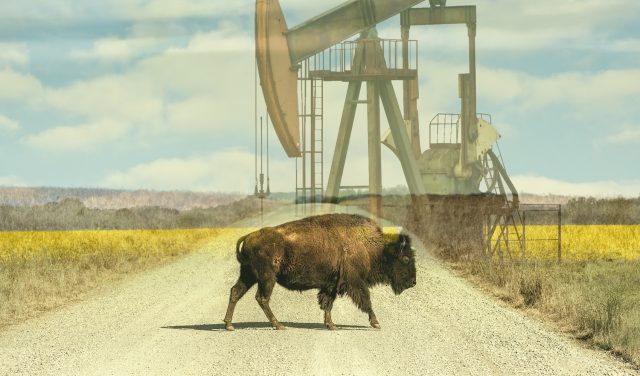 What does a world without fossil fuels look like?

Brigid Mark, a Ph.D. student in CU Boulder’s sociology program, says the fossil fuel industry is firmly embedded in our culture, “so much so that it’s difficult to imagine a world without fossil fuels.”

This week, Boulder is expecting an influx of environmentalists, activists and scientists from around the world for the Right Here, Right Now global climate summit, co-hosted by the United Nations Human Rights and CU Boulder.

But behind the scenes, there’s a quiet student-led movement calling on the university to put its money where its mouth is and divest from fossil fuels — and it’s building momentum.

Fossil fuel divestment is the intentional movement of money and investments out of the fossil fuel industry and into more sustainable and ethical sources.

Divestment campaigns are rooted in both climate science and social responsibility — taking action on the fact that burning fossil fuels caused climate change, which is experienced differently depending on social status.

According to the Global Fossil Fuel Divestment Commitments Database, 1,552 institutions have divested an approximate value of $40.5 trillion globally.

Higher education institutions like Harvard and the University of California (UC) system have also ended their investments in fossil fuels because of environmental, ethical and financial reasons.

Jagdeep Singh Bachher, UC’s chief investment officer, and Richard Sherman, chair of the UC Board of Regents’ Investments Committee, wrote an op-ed in the Los Angeles Times stating, “We believe hanging on to fossil fuel assets is a financial risk.”

Harvard’s president, Lawrence Bacow, justified the Ivy League school’s divestment in a statement to the Harvard community: “Given the need to decarbonize the economy and our responsibility as fiduciaries to make long-term investment decisions that support our teaching and research mission, we do not believe such investments are prudent.”

The student-led club Fossil Free CU and the Boulder Faculty Assembly are helping spearhead the divestment campaign at CU, but the university has also taken steps toward climate action and more sustainable investments.

Earlier this fall, Fossil Free CU released a petition calling the University of Colorado system to divest from fossil fuels.

“Through its investments,” the group wrote, “the university consents to the devastation inflicted by the fossil fuel industry, and thus endangers the future of CU students, perpetuates systemic injustices against marginalized communities, harms the university’s reputation as a global climate leader, and threatens Coloradan communities.”

In a resolution written in April this year, the CU Boulder Faculty Assembly cited more than 10 reasons “to call on the University of Colorado to divest from fossil fuels and reinvest in a just transition.”

CU administration has taken steps of its own, including CU Boulder Chancellor Philip DiStefano’s “Call to Climate Action” in 2021, and CU joining the Principles of Responsible Investing in the summer of 2022 (a pledge toward more climate friendly and socially responsible investing).

“We are starting to see some change, which is a good thing,” says David Paradis, speaking as a faculty member at CU Boulder. He is also involved with the Boulder Faculty Assembly.

A report from PBS says there are at least 20 pending lawsuits filed by cities and states across the U.S. claiming the fossil fuel industry misled the public about risks associated with climate change. One of the goals of CU divesting from fossil fuels, Paradis says, would be to protect the university from an industry known for fluctuating value, expensive environmental disasters and array of social costs.

“At some point, they’re going to be held accountable for that,” Paradis says.

With students, faculty and administration all taking steps toward climate action and sustainable investments, what is keeping the University of Colorado from removing its investments in fossil fuels?

‘It’s not a lightswitch’

The University of Colorado has three pools of money invested in fossil fuels: the treasury pool, endowment and retirement funds.

Of the $4.9 billion investments between the CU Foundation and treasury pool, $270.5 million (5.4%) is in the fossil fuel sector.

CU is one of the few universities in the country that has an elected Board of Regents, which is responsible for “the general supervision of the university and the exclusive control and direction of all funds of and appropriations to the university.”  There are nine members who serve six-year terms.

Ken McConnellogue, acting vice president for communication at the Office of the President, says there has been “a fair amount of discussion” about divestment at the administrative level.

“[Divestment] seems rather simple, like turning off a light switch,” he says. “It’s a lot more complicated than that.”

According to the National Science Foundation, Colorado’s state support for higher education per full-time equivalent student ranks second lowest in the country at $2,909 per student (the national average is $8,000). This makes the University more vulnerable to financial issues.

“The practical effect of that is we have less money to work with, so we look to our investments to fill in some of those gaps,” McConnellogue says. “We need all the money we can get coming into this university.”

McConnellogue says it’s in CU’s best interest to have a diverse portfolio of investments to support student scholarships, faculty programs and facilities, including fossil fuel investments.

Tony Vu, CU’s treasurer and chief investment officer, was on administrative leave and unavailable for comment.

Brigid Mark, one of the leaders of the horizontally-led Fossil Free CU who had experience with fossil fuel divestment prior to becoming a student at CU Boulder, says the group feels support from students, but there is often confusion around how the different pools of money work and who manages them.

“The fact that I can’t understand right away is indicative of how difficult it would be for anyone to understand,” she says. “For example, an undergrad who’s never done divestment before.”

P.D. Gantert, a CU Boulder alumnus who helped lead the fossil fuel divestment campaign from 2013-2016, says there was often confusion around how to direct advocacy efforts, partially because of a high turnover of students, and partially because of delayed responses from the administration.

“Give it a year or two and key leaders are graduating out from student activism,” Gantert explains. “Sometimes there are younger leaders who are able to pick up the torch and continue carrying it, but that’s not always the case.”

Many university divestment campaigns across the country rely on student activism. When students have a finite amount of time at a university, it’s difficult for organizations like Fossil Free CU to maintain knowledge and resources, impeding the campaign’s progress.

Despite advocacy from Gantert and other students, the Board of Regents voted 7-2 against divestment in 2015, which was the last time the issue came before the Board.

Paradis says he is impressed with Fossil Free CU’s moral compass, leadership and efforts to work with the administration, rather than villainizing them.

“That takes a lot of maturity and poise,” he says. “It’s easy to get mad, and when you get mad at someone, they don’t work well with you. It makes more sense to do it the way [the students are] doing it.”

That strategy has helped form a positive relationship with Treasurer Tony Vu, who signed on to the Principles for Responsible Investing and has communicated transparently with both Paradis and students with Fossil Free CU.

“I’m feeling fairly hopeful,” Paradis says. “I feel like for the first time that I know, we have a treasurer who’s making plans to move in the right direction, and I feel as though it’s achievable and doable, and that’s exciting.”

While divestment isn’t on any upcoming board agendas, Paradis is optimistic about the Board of Regents’ new 5-4 Democratic majority.

Lesley Smith, chair of the Board of Regents, declined to comment. However, she had an informal meeting with students and faculty involved with Fossil Free CU on Nov. 18.

“The CU administration should align its financial investments with its values,” Mark says. “Its goals are to prepare students for their futures, and right now, they’re going against that with their investments, because they’re endangering their futures.”

Fossil Free CU will host a strike to promote divestment at noon on Friday, Dec. 2 outside the UMC building.