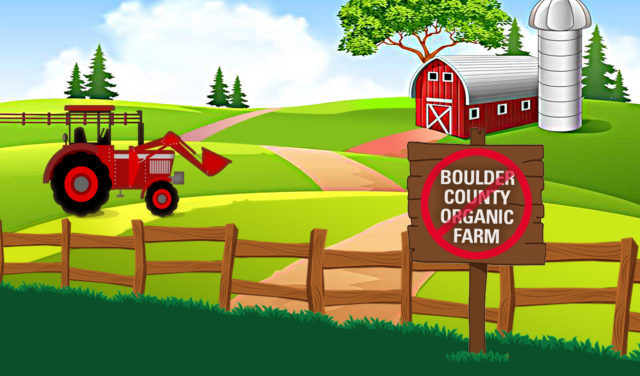 Of the 24 organic farmers who started working Boulder County land in 2011, only five are still in business.

There are a lot of reasons for the roughly 80 percent failure rate, and everyone has an opinion on the definitive cause — farming in Colorado is tough, the County doesn’t give farmers enough resources, the land is not ideal, the farmers were bad farmers and on and on.

One obstacle that many farmers, particularly small-scale organic farmers, agree exists is the County’s Land Use Code, which they find restrictive, keeping them from buying infrastructure and engaging in activities that would help make their farms financially viable.

So the County, in response to complaints about the Code, reached out to the community a few weeks ago, asking farmers and members of the public to comment on how the Code can be improved. On Jan. 18, the County Land Use Department will hold a public meeting to share the results and hear more concerns.

But there’s been controversy about the process by which the County has engaged farmers and citizens in this attempt to update the Code; it’s fitting, as this is the latest in a series of controversies regarding agriculture on Boulder County unincorporated land.

Mark Guttridge owns Ollin Farms just south of Longmont. He notes that in the first three weeks open to public comment, only one farmer submitted his thoughts. One reason might be, he says, is because current Land Use Code is enforced only when there are complaints, and that many farmers may be operating in violation of code out of necessity, thus incriminating themselves by participating in the survey.

For instance, Guttridge hosted about 80 Boulder Valley School District students recently to teach them about carbon sequestration, cover crops and other regenerative farming techniques. But the event exceeded the six events he’s allowed to host each year on his farm per the County’s Land Use Code. The six-event limit is an arbitrary rule, Guttridge says, developed from one isolated incident and applied to the rest of the farmers in the County. (An additional six events are allowed with a special review process with the County.) He says it prevents farmers from hosting a culturally impactful amount of farm-to-table dinners, educational events, ceremonies and more, which could also provide valuable income.

There are other issues farmers are taking with the Code. Greenhouses, in certain zones, are disallowed because they’re considered part of “intensive agricultural uses,” even though Guttridge says they’re critical to keep his farm financially stable in the winter and keep key organic material such as seedlings alive.

Wyatt Barnes of Red Wagon Farm says the rules regarding farm stands are financially prohibitive (and complex). In his case, he either has to run his farm store off-site or limit the amount he can sell at his on-site store.

“Getting empty land and only using it for a farm stand does not work financially. No one can get a foothold to start a business and grow it to where maybe they could buy an entire property to dedicate to a farm stand,” he says.

The County, of course, must act not only on behalf of the farmers but of the people who live near agricultural operations. Traffic, machinery, blocked views — those are negative impacts. Walt Pounds operates a farm on 60 acres of a conservation easement north of Longmont. He understands the concerns neighbors have, but operating a successful farm simply necessitates certain bits of infrastructure, he says.

“The neighbors definitely prefer to not see any change to the property and … they like looking out across the pasture, so they don’t want to see any active ag development,” Pounds says. “I do think that’s a problem. We have a beautiful county and it’s because we didn’t allow overdevelopment, and I very much appreciate that. [But if] the answer from an ag perspective is not to do any [land improvements], you end up with a perpetual decline in soil fertility and noxious weeds, and it isn’t remedied.”

Amy Oeth, planner at the Boulder County Land Use Department, says that although “agri-tourism can help support an agricultural operation,” there are impacts on the environment, neighbors and other farmers. To what extent the County would expand agri-tourism possibilities for farmers, Oeth says there is not a “set view on the appropriate scale.” The open comment period, ostensibly, is an opportunity to broaden that scope.

But Guttridge says despite the fact that the County is soliciting input on specific regulations, the underlying relationship between farmers and County regulators needs to change.

“We need a cultural shift in the County,” he says. “Most of the farmers I’ve talked to, it’s not the specific code, it’s this culture of hindering instead of helping.”

Barnes says the Code is “intentionally vague,” and agrees that a cultural shift needs to occur in order to support farmers.

“There is no way to read [the Code] and really understand what will happen when you go to do something,” Wyatt says.

Pounds says the application of the Code is as bad, if not worse, than the Code itself. He says he spent a year and thousands of dollars in attorney’s fees to site a small piece of infrastructure on his property.

“[The Code application] is very onerous,” Pounds says. “The practices that we have in Boulder County are far more rigorous and difficult than they would be in other parts of the state by far.”

In response, Oeth wrote in an email that the County “hopes to further understand the community’s viewpoints and where opportunities exist for making changes as identified through this initial outreach.”

Land Use Code amendments may sound like small potatoes to the general public, Guttridge says, but improving the Code is critical to advancing sustainable agriculture — if the public appreciates that, they need to have a say in this process. However, the process is muddied for public involvement, he says. With the deadline for public comment Jan. 12, Guttridge thinks the public hasn’t been engaged well enough.

“It’s kind of hard for someone from the public to access [the public comment form] because there are general categories … that are not providing the background the average citizen needs to engage in this process,” he says.

Ironically, education events at Ollin Farms and other agricultural spots would be one way to get the average citizen up to speed. The Boulder County Farmers’ Markets are often the only interaction citizens have with farmers, but it’s not easy in those situations to convey concepts like regenerative farming and carbon sequestration — and how regulations regarding how many interns can live on your property or which animals can graze affect the ability to execute those groundbreaking environmental concepts.

“In general, there’s a new form of agriculture coming, a new paradigm of agriculture being blossomed,” Guttridge says. “To me, it’s summarized by putting the ecosystem back in the field. We’re seeing farms bringing animals and managing multiple crops. You need greenhouses, new people. In some ways, it’s a little more intense.”

The County recently scrapped its Sustainable Agricultural Research and Innovation Initiative (SARII) program because of a controversial bidding process. SARII would’ve helped large farmers transition off GMOs, which were ordered to be phased out, but Guttridge and Pounds say high-profile cases like that obfuscate a larger point: that farmers in Boulder County are doing cutting edge research in sustainable farming, outside of GMO research, with little help and publicity.

“One of the unfortunate things, we seem to want to just grab onto a sound bite as a citizenry and that sound bite [pertains to] GMOs,” Pounds says. “So we’ve paid all this attention as to whether or not we have genetically modified crops on our ag land and that’s a very small component of the issue. The issue is really around soil fertility, and it’s unfortunate.”

Oeth says carbon sequestration is not the focus of this public input period.

The County did take a small step in the right direction, Guttridge says, with its Colorado State University-led program working with EcoCycle to study agriculture and composting. But given the relatively small scope of that, he and other local sustainable farmers are having to pick up the slack by organizing and hosting research initiatives. Even still, he says, the County, after scrapping SARII, hasn’t effectively managed the GMO transition.

“We’re no closer to the GMO transition, like we still haven’t figured out alternatives for bigger farms on open space, so we’re kind of moving into crisis mode,” he says.

Oeth says there is no timeline for actually implementing anything that comes out of the public comment period, but says the County will pinpoint areas for further research and outreach.