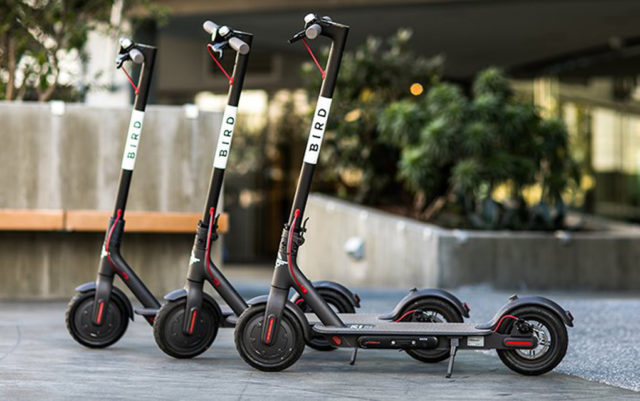 There’s a new wave of micro-mobility e-transportation sweeping the nation, and it’s inevitably coming to Boulder.

For the time being, though, it’s been stalled by the City’s “emergency moratorium,” which is holding e-scooter rental companies at bay, preventing them from obtaining business licenses in Boulder. The moratorium is intended to stay in effect until the City has a chance to thoroughly vet the issues surrounding e-scooters, engage the community in conversation and examine the scooter’s environmental and economic impacts.

Boulder doesn’t want to be steamrolled by the scooter rental companies in the same way places like Arizona State University, Nashville and Denver were. Boulder hopes to work out most of the kinks before the inevitable problems arise.

When e-scooters arrived in Denver, it was late in May 2018 and it was without warning. One day the Mile High City woke up and some 300 brand-new dockless electric Lime scooters were scattered throughout its streets, charged and ready for action.

Unlike Boulder, Denver had almost no time to prepare for that first wave of e-scooters, and they had no rules or regulations in place to manage them.

“We had word on Wednesday that one of the [e-scooter] operators was planning to launch on that Friday,” says Cindy Patton, the strategic advisor at the Denver Public Works Office of Policy Legislative Affairs and Special Initiatives. “We worked very hard and tried to coordinate with them, to let us come up with a regulatory structure for them, and that request was not heeded.”

A week later, Bird, another rental company, dropped its e-scooters on Denver, also unannounced. By the end of 2018 the number of dockless e-scooters in the city had skyrocketed from several hundred to several thousand, split between five city-approved operators — Lime, Bird, Lyft, Razor and Spin.

“We were definitely in reactive mode and that was not ideal,” Patton says. And Denver wasn’t alone. Other cities and college campuses around the country have experienced similar struggles coping with the sudden introduction and subsequent madness of an e-scooter influx.

That’s exactly the situation Boulder is hoping to avoid with its emergency moratorium on e-scooter businesses. The ban, passed on May 21 by the Boulder City Council, prohibits the city manager from issuing business licenses to any e-scooter business until February 2020. At that time, the City will either extend the moratorium (if it needs more time to make a decision) or announce which e-scooter company or companies will operate in Boulder.

“It’s important to note that this is not a moratorium on e-scooters,” clarifies Boulder City Council member Bob Yates. “Owners of e-scooters are free to ride them on the streets of Boulder. What City Council put a pause on is the issuance of new business licenses to e-scooter rental companies.”

“We’ve been working with the City of Boulder for over a year now,” says Sam Sadle, Lime’s senior director of government relations and strategic development. “We’re partners in the process and we’re here to be part of it.”

In theory, e-scooters seem like a form of micro-mobility technology at which the City of Boulder would leap. They’re marketed as environmentally friendly, energy efficient alternatives to first and last mile transportation, supposedly replacing short car rides around town. According to Lime’s own research, 34 percent of e-scooter riders in Portland replaced car rides with scooter rides; and in St. Louis that number is even higher, at 38 percent. All told, Lime’s global scooter crusade has apparently prevented some 96 million metric tons of carbon from entering the atmosphere.

“Lime riders have saved more [than] 699,786 gallons of gas,” Andrew Savage, Lime’s vice president of sustainability said in a press release. “That’s equivalent to taking 1,320 passenger vehicles off the road for a year.”

That’s consequential, if it’s true. But there are many who remain skeptical of these professed environmental perks (including several members of Boulder City Council). As with any kind of vehicle, there are environmental costs associated with e-scooters that offset their emissions reductions and that need to be factored into the equation.

As the council meeting memo from May 21 points out, the street-life of one of these scooters on average is only about 30 days. The wear and tear these things incur on the streets, in the weather and on the move (not to mention as the result of random acts of vandalism) means that these e-scooters have a very short life-span.

What happens in the e-scooter after-life? How much of their makeup is recycled? If every one of Denver’s 2,350 e-scooters (each approximately 30 pounds of plastic, metal and rubber) has to be replaced every month, the waste associated with operating these might far outweigh any carbon emissions that they offset.

Some e-scooter companies, like Lime, are focusing greater and greater energy toward extending the life of their products and recycling their parts however possible. Sam Sadle, of Lime, likened their recycling efforts to how Native Americans “used every part of the buffalo.”

“Every piece of the scooter is recycled — our first priority is on maintenance and on extending the lifespan of the scooters if possible,” Sadle assures. When, at last, a scooter is deemed “unusable,” Sadle says it is passed onto reputable recycling companies for disposal.

Another question of sustainability concerns electricity. Where do e-scooters get their “E” from? At the council meeting in May, Councilwoman Lisa Morzel asked whether or not it’s a renewable source of energy.

It isn’t, usually. Lime “Juicers” or Bird “Chargers” are often paid to collect e-scooters off the streets and charge them in their own homes. The electricity powering these scooters often comes from the same power grid those riding them use to charge their phones and light their homes, which often comes from a petroleum- or natural gas-based source.

These questions and many others will hopefully all be addressed in the RFI that the Boulder Department of Transportation plans on submitting to the operators who are courting the City. According to Dave Kemp, City of Boulder transportation planner, once they’ve submitted the RFIs with all of their questions to the operators and get their responses back, they will then select a few “finalists.” From that smaller pool of companies, they will choose who will operate within Boulder.

It’s a similar approach to how Fort Collins handled the e-scooter invasion, except Boulder is going to include the public to a much greater degree, Kemp says.

“We’re looking at a more extensive public engagement process that really vets the issues and concerns with all of our stakeholders in the community,” he says. Stakeholders that include Boulder’s neighborhoods, CU, the Boulder police, the Boulder Chamber of Commerce and community organizers.

Kemp says that the City will be hosting three public demonstrations in July and August along with two more for the college campus. Invitations will be sent out to the community for these demonstrations, which will include talks and panels where people can ask questions, discuss their hopes and concerns, as well as getting to test out different scooters from different operators.

The City is also considering a pilot program at one of the employment centers in Boulder, such as Flatiron Business Park or Boulder Junction, says Kemp. Using the e-scooter’s geofencing technology, the city could electronically cordon off an area and drop off “10 or 20” scooters to see how they’re used over a period of time.

“It could enable people who work in these business centers to use these e-scooters to go ride to lunch versus having to drive a car,” Kemp says.

A pilot program would allow the City a preview of how these scooters would be used for week-day transportation (versus weekend recreation). It would offer a sneak peek of the day-to-day, week-to-week impact they might have on reducing first and last mile transportation emissions.

However, Kemp doesn’t seem certain that the pilot project is going to be totally necessary.

“As we think more about it, it may be best to move quicker with just drafting the regulations and then working from there,” Kemp says. Because, the fact is, these e-scooter rental companies are coming to Boulder sooner or later.

“That’s quite inevitable,” says Sam Weaver, one of the councilmen who voted in favor of the emergency moratorium.

And before the scooters get here, Weaver and the other councilmembers who voted for the moratorium think it’s important to prepare the city thoroughly.

“We want these micro mobility solutions in Boulder,” Weaver says. “But we want to do it in a way that avoids some of the downsides that other communities have seen as they come in.”

There was nothing emergent about this emergency moratorium, Kemp says. “The only reason why the ‘emergency’ term comes up is because that legal terminology allowed Council to approve the moratorium in one night versus spread out over several meetings.”

So, while the e-scooter influx may be inevitable, it isn’t any impending crisis. The City’s moratorium will give the community enough time to properly lay the infrastructure and design regulations, so that when these e-scooter rental companies finally arrive in Boulder, the City and its residents will be ready for them.