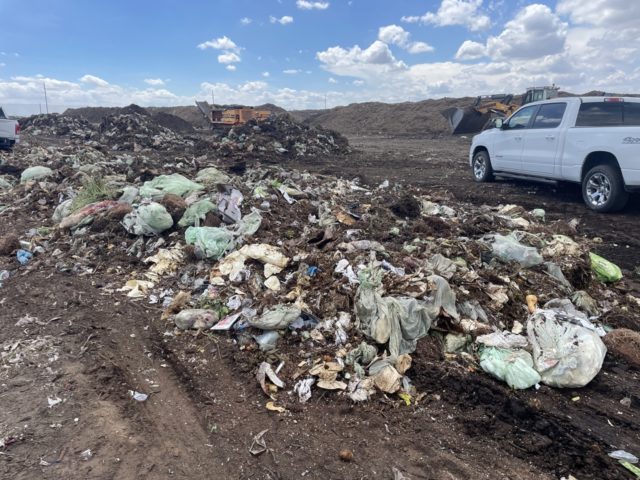 The journey of a banana peel doesn’t end in the compost bin. That’s only the beginning.

Whether it’s in a 65-gallon bin outside a family home or in one of the receptacles camouflaged around Boulder, the peel will eventually get picked up by one of several waste haulers serving the city. From there, the peel is joined by organic waste from 100 other bins in the same truck and taken to a transfer facility.

That truck’s load will end up with four other truckloads (each estimated to have 100 bins worth of organic waste) in one large trailer headed to A1 Organics, the state’s largest organic processor, to be composted. A1 staff dumps the load, inspects it, and finds a shard of glass.

The load can’t be accepted because of contamination. It’s a frustrating and finicky process, as one non-organic item can ruin hundreds of bins and the whole truckload’s potential to create compost from organic waste.

This is an all too familiar story for Keenesburg-based A1 Organics — they’ve rejected 30-35 loads over the last seven weeks. Instead of that organic waste being composted, it gets sent to the landfill.

“That’s why we’re at a point now where we can’t keep hitting this path,” says Clinton Sander, the marketing manager at A1.

Despite investing millions of dollars in equipment to help remove plastics and other contaminants, the recent rise of contamination led A1 to start charging waste haulers a contamination and reloading fee starting Aug. 4.

But, city of Boulder staff and waste haulers are on board with A1 to create higher-quality compost, despite the challenge of decreasing contamination.

On Sept. 13, the city changed its compost rules for businesses to allow them to remove front-of-house and customer-facing compost receptacles, which are notorious for introducing non-organics to waste hauler loads.

“I think [front-of-house compost receptacles] have always been an issue,” says Jamie Harkins, sustainability coordinator for Boulder, acknowledging the confusing consumer composting experience, especially with common foodware items that look eco-friendly but are not certified compostable.

Suzanne Jones, executive director of Eco-Cycle, one of Boulder’s waste haulers, says the changes in policy by both A1 and the city of Boulder are a push in the right direction

“[These policy changes] create an opportunity for us to get it right and produce the quality compost that we’ve always said was our intent,” says Jones, who also helps Eco-Cycle manage the county-owned Boulder County Recycling Center. “Now we need to step up to the plate and follow through.”

To avoid A1’s contamination fees, Eco-Cycle drivers are inspecting bins before picking them up. If there’s any contamination, they give immediate feedback to that customer.

Even with these new policies in place, Sander says A1 is still rejecting loads. A1 has also seen up to 50% reduction of loads from some waste haulers, signaling that contaminated loads are being successfully turned around earlier in the process.

But, while the extra filtering means less contamination issues for A1, ultimately, that means those organics aren’t making it to them to be composted.

All this work for dirt?

They call it ‘back gold’ for a reason.

“Compost is the solution to many of our greatest challenges,” says Jones of the benefits of compost.

Jones says that 40% of the waste stream is organic — which creates an opportunity for composting to play a pivotal role in landfill diversion and decreasing greenhouse gas emissions.

When organic waste enters anaerobic conditions (without oxygen) in landfills, it generates methane, a greenhouse gas more than 25 times more potent than carbon dioxide. Although methane only remains in the atmosphere for about a decade (carbon dioxide stays for hundreds of years), its heat-trapping capacity creates climate warming in the near term.

Compost also helps with water retention. According to the U.S. Department of Agriculture, 1% of organic matter in the top six inches of soil can hold around 27,000 gallons of water per acre. Sander says the final compost product at A1 has an average of 30-50% organic matter.

Boulder County adopted a resolution to reach “zero waste — or darn near” by 2025. According to the Eco-Cycle 2021 report, the county recycled and composted 43% of its waste in 2020.

“Many of the cities within Boulder County are the top communities in the state of Colorado when it comes to composting and recycling,” says Jones.

These numbers are higher than both state (15.3%) and national (32%) waste diversion numbers.

Sander says it will take a multi-level solution and intentionality to clean the stream of organics.

“We need accountability at all touch points, from curbside all the way until it lands on [A1’s] ground,” he says.

Sander emphasized the importance of staff conducting quality control at source points as well, while acknowledging that not everyone has the resources to do so.

On top of hauling, Eco-Cycle is leading efforts to educate students about recycling and composting in the Boulder Valley School District, as well as advocating at the state level. Jones thinks there’s room for growth, but is optimistic about policy changes.

“Boulder has a chance to create a model that works for the rest of Colorado, the opportunity to create a compost system that really works.”