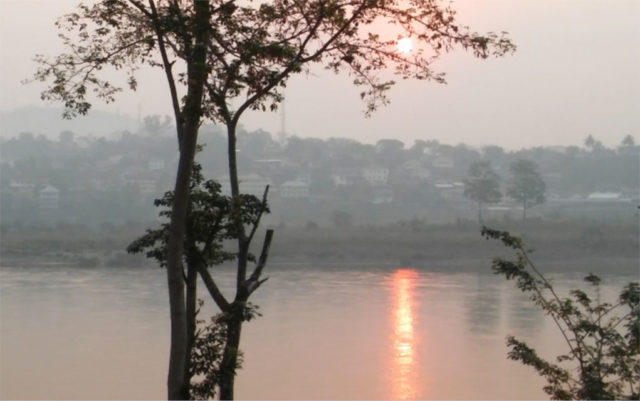 Smoke hangs heavy in the air over the Mekong River in northern Thailand. Dawn is breaking over the village of Chiang Khong and with the sun comes the promise of another sweltering April day.

The smoke is from slash-and-burn agriculture taking place on the other side of the river in Laos, a country ruled by a military dictatorship. The sound of reveille flows across the river each morning, along with the smoke and heat, into the democratic country of Thailand, with only the river between the two.

The smoke, the heat, the bugle calls at dawn — it’s Apocalypse Now on the Mekong River.

But the river is a bustling, happy-looking thoroughfare filled with longboats transporting food, fishermen casting nets and college students calling out commands as they row crew.

And on this particular April morning, Gary Wockner is also in a longboat taking a tour of a village forestry program with Chiang Khong local Chak Kineessee.

Back home in Colorado, Wockner is known for his tireless devotion to protecting the state’s waterways. He’s the director of Save the Colorado and Save the Poudre, and has been an outspoken voice for stopping the expansion of Gross Reservoir Dam, which activists fear could drain some creeks and tributaries to almost 80 percent of their total flow.

He also volunteers and consults for International Rivers and the Boulder-based Global Greengrants Fund, both of which fund and support river protection advocacy worldwide. In this capacity, Wockner has expanded his activism, traveling to and writing about dam and water threats in Costa Rica, Colombia, Mexico, Belize and Spain.

Which brings us to the Mekong River in Thailand.

This past April, Wockner traveled to the village of Chiang Khong to consult with locals in their fight against the development of more dams upstream.

China has built several dams on the river that irrevocably damage the ecology of the waterway, and subsequently the lives of the people in Chiang Khong. Many more dams are proposed on the Mekong River in China, which will further mar the communities and ecological systems downstream in Thailand, Laos, Myanmar, Cambodia and Vietnam.

While Wockner’s no stranger to the water wars being waged across the globe, he had “a little bit of an epiphany” on his trip to Thailand.

“The local people, or what you might call indigenous, are trying to protect their landscapes from the crush of industrial culture, [from attempts] to dam for hydroelectric power,” Wockner says. “People have been living there for a thousand years, but they don’t own the land so they can’t say, ‘Here are the four corners of my property.’ When the government comes in and tries to cut down the forest or build the dam, they have to start a process of legally demarking these land rights and going through the court process. It creates a very different legal and political dynamic.”

And this is the work Wockner does in his far-flung travels; he advises locals on how to navigate new and complicated legal processes.

Well, that’s the job description, anyway. One might say he’s teaching them how to save their own lives.

Wockner says he’s realized that in the U.S. we protect nature for lots of reasons, often to defend endangered species or habitats, but we can be very removed from the idea that something like a dam can wipe out an entire village and its centuries-old way of life — that damage was done long ago with the influx of Europeans.

He’s expanded his work because the problem has expanded. The controversy around water — who gets it, and how much of it — is escalating across the planet, from the banks of the Mekong to the tributaries of the mighty Colorado River. And it’s all based on water diversion technology that was created in the U.S.

“The technology that was created in the U.S. along the Hoover Dam, that was first major hydroelectric dam on the planet,” Wockner explains. “That same technology, over the last 50 years but especially over the last decade, is being transported all over the planet. There are hundreds of proposed dams across South America. The country of India recently came out with a plan to plumb the country together. Nepal is proposing dams, Tibet, the Balkan countries of southern Europe…”

Rivers across the world are facing an apocalypse.

The following photo essay describes Wockner’s experience with the villagers of Chiang Khong and their fight to stop more dams on the Mekong River.