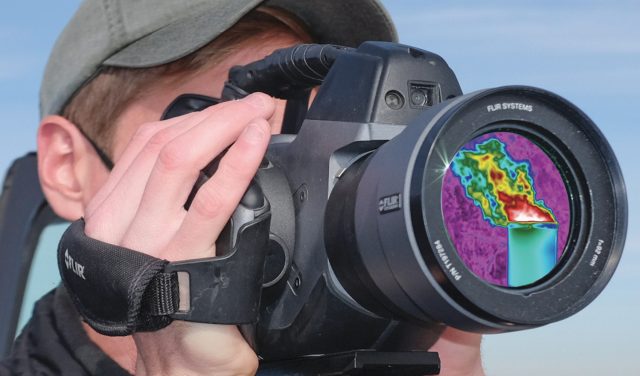 A matte-black carrying case with two heavy latches suggests something vaguely weapons-grade in the trunk of the rented Jeep. An optical gas-imaging camera is removed from the case’s interior styrofoam mold. When powered up, the camera emits a hum, the sound of a large infrared sensor cooling itself in the same way surface-to-air missiles do. But this heat-seeking eye won’t be searching for jet aircraft. It’s designed to detect methane, hydrocarbons and volatile organic compounds (VOCs) leaking from fracking facilities across the state, and on this frosty morning, a handful of gas wells around the small town of Ault, Colorado, just east of Fort Collins.

Andrew Klooster, the man calibrating the camera, is young, sharp-eyed, serious. He’s a gas imaging thermographer for Earthworks, a petroleum industry watchdog. Klooster has traveled to more than 700 sites around Colorado collecting videos of possible violations, which are then submitted to state regulators. Klooster’s camera can see what the human eye can’t.

Methane, among the most potent greenhouse gasses — along with VOCs like toluene, butane, hexane, and benzene, a known carcinogen linked to a host of serious health complications — show up as a dance of color to the infrared camera. Colorless and otherwise beyond human perception, these plumes of hydrocarbons make themselves visible in other ways, in the bleeding noses of children, burning eyes, upset stomachs and, further down the line, elevated rates of congenital heart defects where exposure is chronic. With more than 10,500 actively producing oil and gas sites, Weld County — or “Well” county as some locals call it — is one of those places: the most heavily drilled region in Colorado and the fifth most productive oil county in the country. Ault lies near its geographic center.

Klooster’s survey doesn’t begin at one of the many drilling operations dotting the farmland. Instead, it starts with a visit to a one-story bungalow in Ault’s oldest neighborhood, the home of a retired English professor. Carol Hawkins, 71, lives alone with her dog and a collection of air-purifiers placed consciously throughout the house, what was supposed to be a dream home and a place to mourn the passing of her husband when she moved back to Colorado from Maine in 2017.

“I couldn’t afford to live in Denver or Fort Collins. At the same time, I loved rural America,” Hawkins says. She found a listing for a charming craftsman-style residence and sent her daughter, a Coloradan, to investigate: “I remember her saying, ‘Mom, this house is perfect!’ But she didn’t say anything about the fracking (wells), because in Colorado it’s become too normalized. It just didn’t register.”

With Hawkins’ pre-existing lung condition, the prospect of living by wells was alarming, but the risks, like the drilling, seemed distant. Over time, Ault’s expansive views across the eastern plains were studded by noise barriers surrounding new drilling operations in fields by grazing livestock.

“Things got personal when I received a ‘forced pooling notice’ from a gas industry lawyer the year I moved here,” Hawkins recalls. The controversial practice allows oil and gas companies to effectively annex mineral rights from property owners and drill beneath their homes regardless of their consent. Hawkins not only declined the offer, she wanted to fight it.

The death of Mark Martinez* and his brother-in-law Joey Irwin in nearby Firestone in April of 2017 solidified her resistance. Fracking gasses saturating the Martinez home combusted violently, transforming the two-story house into a crater. Mark’s wife, Erin, was critically injured but survived. “I was freaked out,” Hawkins says. She got in touch with Kate Merlin, a WildEarth Guardian staff attorney who decided to represent Hawkins’ forced pooling case pro-bono — and they won.

Hawkins began educating herself and tuning into science panels on the risks of fracking hosted by 350 Colorado, an environmental advocacy group focused on fossil fuels. That’s where she first found Klooster. “This is what I need, somebody who can give me hard evidence,” she remembers thinking

Bringing formal complaints to the Colorado Air Pollution Control Division is Klooster’s primary role with Earthworks. Less obvious are the relationships he’s built with residents like Hawkins, who he invites on these field surveys. They provide tips about suspected leaks around their community and, in return, find a sense of validation that these abstract dangers can be made visible through Klooster’s camera — even if that’s not always pleasant. “The first time I went with Andrew, it was a little traumatizing,” Hawkins half jokes.

One of these relationships led Klooster to the Prospect Energy facility in Fort Collins, where residents’ pleas to state regulators failed to produce any follow-up investigation. They were eventually vindicated: The site was shut down by the Department of Public Health in August 2021 after Klooster captured multiple, massive emission events. It was discovered that those living by the facility had been subjected to dangerous concentrations of hydrogen sulfide, a poisonous, corrosive and flammable gas that can cause eye and respiratory irritation, insomnia or convulsions, according to the Centers for Disease Control.

“The ability to give community members that additional insight, that ammunition for their fights to try to hold this industry accountable, is really the important piece of all of this, maybe the most important piece,” Klooster says. “A typical first reaction to seeing these plumes is shock.”

That power is on full display as Hawkins steps from the Jeep onto the gravel access road leading to the Ruby 7-J well pad. The site is operated by Bayswater, a Denver-based oil and gas corporation. Klooster stands back from the tripod as Hawkins stoops over the LCD display. “Sons of bitches,” she mutters. “I can’t believe this.”

The infrared sensor displays an ominous orange cloud billowing from behind the noise barrier. Klooster is more circumspect. Without a clear view of the source, he can’t be sure what we are seeing. “We have to be careful with these noise walls. This could be hydraulic fluid from the mud being pumped out of the bore hole or it could be dust from the trucks,” Klooster explains. “[State regulators] will just dismiss this if we can’t see the source.”

We travel south of Ault’s main drag to survey the PDC California well pad, which is in the active drilling phase. Hawkins gestures to a nearby cluster of homes, looking worried. “My grandson just bought his first home there,” she says. Two months ago his partner gave birth to Clover, a baby girl. “I’m scared to death for her,” Hawkins says. The new Eaton High School is less than a half-mile away while countless suburban developments swell in the distance.

Our last stop brings us to a freshly built Bayswater facility abutting a dozen new homes and a few ranchettes. Klooster beckons Hawkins over to his perch by a barbed wire fence, camera trained on a seemingly innocuous row of tan tanks. The viewfinder reveals something else instead, a colossal plume fluorescing across the LCD screen. It’s settled like a blanket over some of the houses.

Klooster delivers his assessment: “We’re looking at a major emissions event. This is bad. This is really bad. Hydrocarbons are just pouring out of there.” As he says this, an older man exits a small, weathered cottage by the parked jeep and approaches our group looking concerned. He introduces himself as Mike, and says he’s lived there on and off for 50 years. Calmly, Klooster explains why we are loitering on this remote, dusty road, then informs Mike about the major leak across the field.

Mike stands by the camera taking in the news. “I don’t know if it’s all good or all bad, but it is what it is,” Mike says finally, though, like Hawkins, he had refused an offer on his property’s mineral rights. Klooster reflects on the encounter on the drive back to Ault. Shock and horror are common responses for residents seeing leaks first hand. “So is fatalism,” he says. “They don’t feel like they’ve got much power over the situation. These are massive companies.”

Klooster submitted a formal complaint to the Colorado Air Pollution Control Division. As of Dec. 16, Bayswater denies violating any regulations.

A 2019 Colorado Department of Public Health and Environment study modeling the effects of acute VOC exposure within 2,000 feet of a well concluded that short-term health impacts like nose bleeds and nausea were real. Disregarding the focus of the research — short-term effects — industry representatives found another way to interpret the findings. “There are no long-term health impacts related to oil and gas development,” Dan Haley*, president of the Colorado Oil and Gas Association, said at a news conference. A growing body of evidence may suggest otherwise.

CU Anschutz professor Lisa McKenzie is a public health epidemiologist who specializes in air pollution generated by fracking. She was frustrated with many of the conclusions drawn from the 2019 study. “The research did indicate there could be increased risks for short-term health effects,” McKenzie says. “That doesn’t mean there aren’t any health effects at farther distances or longer durations, because, first of all, they didn’t have that data. It also wasn’t what they were looking for.”

Her recent studies have focused on health outcomes for children living at least a kilometer from wells, like Hawkins’ grandson and his newborn daughter. McKenzie laid out a series of complications potentially linked to fracking exposure: “In areas with dense oil and gas development, we’ve been seeing low birth weights, more preterm births, more children with congenital heart defects and increased incidence of childhood cancers such as acute lymphocytic leukemia.” Children growing up close to high-density fracking were four times as likely to develop blood cancer.

None of this is news to Klooster, who views his thermography as a modest, though important piece in educating the public about dangers inherent to drilling. “The industry has gotten away with a whole lot, because for the longest time, people weren’t even aware of the possible health impacts of oil and gas extraction,” he says. And when concerns do pop up, as they have, it’s been easy for industry operators to say there’s nothing to see. Not in small part because the compounds in question escape the eyes’ capacity to do so.

Klooster’s camera is also a mirror then. Its reflections can be described in scientific terms: emissivity, electro-magnetic radiation, thermal gradients. For residents trying to make sense of their relationship to an extractive landscape, the story told by this infrared sensor requires little explanation. It’s the same facility they’ve seen many times, only now, there’s a new detail. A cloud overhead.

*The original version of this story incorrectly stated the names of the victims in the Firestone combustion event. It also incorrectly identified the president of the Colorado Oil and Gas Association as John Haley. The story has been updated to reflect these changes.