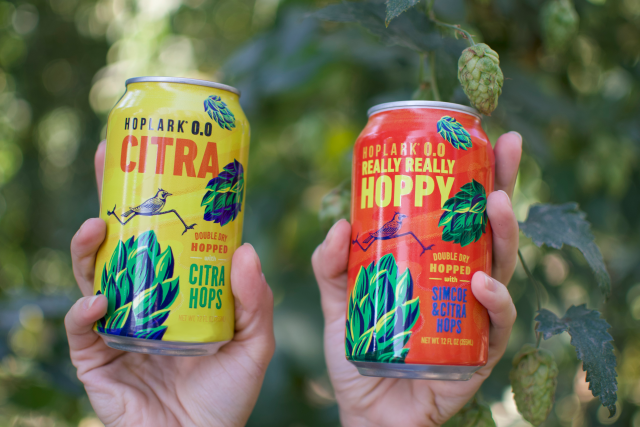 With a new year kicking in and some folks looking for ways to enjoy the pleasures of a craft beverage without the booze component, Boulder’s Hoplark provides a bevy of refreshing and increasingly popular alternatives to beer.

“The tea is brewed like craft beer and hopped like craft beer,” says Toni German, marketing director at Hoplark. “It’s sparkling tea paired with hops to create flavors like a West Coast IPA and other more mellow [IPA] varieties. There’s no alcohol content, but people will try them as a beer replacement at first, and then they’ll find other uses for the beverage throughout their day. Some of them have caffeine and some don’t.”

Varieties of Hoplark tea include The Calm One, a chamomile-based and non-caffeinated best-seller; Citra Bomb One, which includes white tea and has a low level of caffeine (30 mg); and Really Hoppy One, which offers a little more caffeine (about 60-70 mg). The HopTea line also features The Green One, incorporating green tea, and limited editions such as The Cacao Mint One.

Hoplark has been operating and steadily growing since 2018, and began selling a line of hop-infused sparkling waters directly from its website in 2021. The sparkling waters, which come in three different flavors, were an immediate hit and in 2022 Hoplark began distributing the drinks nationally through Whole Foods. The sparkling gluten-, calorie- and alcohol-free waters include Sabro, Citrus and Mosaic-hopped versions, as well as several limited-edition releases and collaborations.

The company also offers its double-dry-hopped 0.0 Citra, which competes in the non-alcoholic beer category. German says Hoplark now produces 40,000 barrels* worth of its beverages annually.

“Our special hopping process is a proprietary technology that we use that has the ability to really bring out the distinct hop flavors in the sparkling beverages,” German says. “In our process, there is no fermentation involved, so there is [zero] alcohol in them. And there’s no malt in them, so there’s no gluten.”

German says about two-thirds of the company’s customers are craft beer lovers, or “hop heads,” who enjoy both alcoholic and non-alcoholic beverages, with approximately a third of its customer base being people who previously enjoyed craft beer but who have decided to cut it out of their lives for various reasons.

“We appeal mostly to the craft beer-lovers market, but we’re also a great option for those who are looking to get alcohol out of their diet completely. We usually see a good spike in sales in the month of January, when people are trying to go into the new year with better habits or just a fresh start.”

Hoplark beverages are available in 12- and 16-ounce cans and can be purchased through hoplark.com as well as from select retailers, including Whole Foods.

*The original version of this story incorrectly said Hoplark produces 25,000 barrels of its beverages annual.