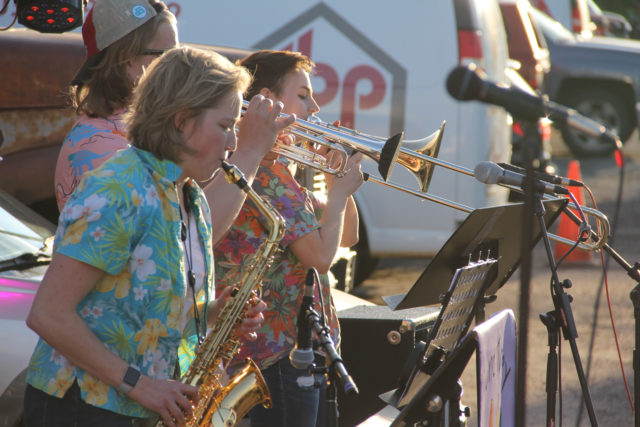 While thousands flock to Boulder for its reputation as an outdoor recreation mecca beneath the picturesque Flatirons, it might be easy for newcomers to miss the fact that the city boasts an up-and-coming art district as well.

Tucked away on the northernmost end of Broadway, blocks of the city have quietly amassed eclectic, vibrant collections of murals, gallery spaces and cafés through reclaimed warehouses and new constructions like a forthcoming expansion of the Boulder Museum of Contemporary Art.

Much of this revitalization can be attributed to the ambitious work of the NoBo Art District, a grassroots organization responsible for cultivating and reassembling Boulder’s art community through a pandemic that shuttered much of the district’s opportunity for expansion over the last two years. Much of the organization’s work focuses on collaborating directly with artists to ensure that the north end of Broadway consistently showcases visual artwork and interactive installations in mixed-use spaces.

“(NoBo) really supports the art community and wants to be involved on that level of keeping people connected and making it an aesthetically interesting place to be here in Boulder,” says Julie Ireland, a north Boulder resident, visual artist and art curation manager who, for the duration of the pandemic, has helped NoBo curate large-scale exhibits and events.

“There’s just a ton of collaborations in the city that come in with people doing creative things or wanting to host their events here,” says Leah Brenner Clack, interim director of the NoBo Art District. “We continue to see interest from people that want to come and add to the creative culture that’s blossoming more and more every day up (in North Boulder).”

Much of the neighborhood’s recent growth is a result of deliberate planning by the organization, such as consistent art walks on the first Friday of each month or the installation of various murals or little libraries on sidewalks, but Clack insists that the neighborhood’s appeal and subsequent attractiveness for various artists has remained organic since the beginning.

“It’s a little more gritty,” says Lisa Nesmith, president of the NoBo Art District. “Part of it isn’t even in the city. It’s unincorporated. So it feels a little more free.”

“I love the fact that it’s off Broadway, you know?” adds Ireland. “It’s really accessible to people, in terms of alternative transportation and things like that.”

Though the organization began in 2009 and has chugged along with the consistent strategy of further connecting the neighborhood each year, NoBo’s leadership noticed a boom in popularity last year as many of its galleries were able to ditch the pandemic protocols of distancing or resorting to online art showcases.

“Our first Friday event went from 200 to 400 people pre-pandemic, to like, 800 to a thousand people coming out,” says Nesmith. “It was like, ‘Wow, I think people really missed this kind of thing.’”

Collaborators like Ireland have noticed an uptick in interest from various businesses who seek to display local art in their spaces and invite residents in.

“I love the fact that when I put out a call for an artist to show in a business venue, instead of getting one or two responses, I’m now getting anywhere from 15 to 25 artists,” Ireland says.

Now that the hunger for the arts has returned at full force, the leadership of the NoBo Arts District turn their sights toward the future, one where that attitude of collaboration is pushed to the forefront.

A major focus, Nesmith says, is to get more and more art shows hosted at these businesses, or conversely, have other events be hosted in the district’s many gallery spaces as the neighborhood seeks to prioritize mixed-use development. Members of the organization, who range from individual artists to a variety of business owners, can host workshops, film screenings or book releases at the NoBo Art Center free of charge.

“If you have an exhibition or an event and you need space, it’s like, ‘Yes, come do it here!’” says Clack. “There’s no gatekeeping going on. It’s pretty open to everyone.”

Despite its close partnership with these local artists, the organization seems to have a sense of trust in the neighborhood’s growth: trust that its artists will put on interesting events year-round, and trust that the public interest in all of it will continue to naturally expand. Because of this, leadership at NoBo is assured the growth of the neighborhood will stem from the passions and interests of its resident artists above all else.

“Right now, we’re engaging with the community through outreach and surveys about what the needs are and what the community wants,” Clack says. “I think that’s really important for people coming into NoBo, developing whatever it is they want real estate or community wise. I’m really excited to see where that goes.”

“We hear comments, like, ‘This is what Boulder used to be like.’ Not gentrified, kind of different and weird,’” says Nesmith. “I can bring my dog. And listen to music. And chat with people who are different from me. After the pandemic, people were really craving something easy like that.”