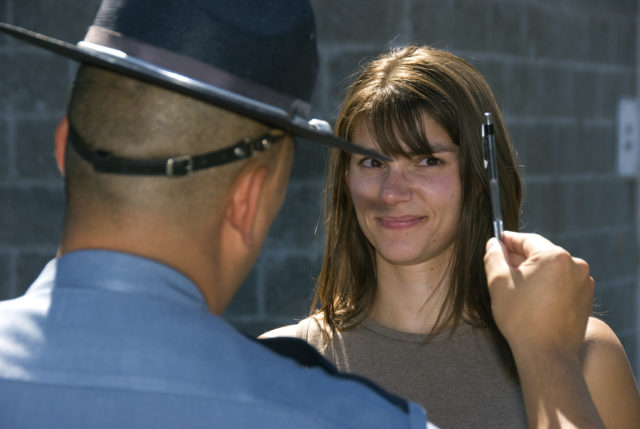 The more often people consume cannabis, the less dangerous they consider driving while stoned to be. According to a survey released by the Colorado Department of Transportation last year, 69 percent of respondents reported that they had driven under the influence of cannabis at least once in the past year, with 27 percent admitting they drive high almost daily. Some respondents said they were always under the influence and considered high to be their normal state. Almost half of the regular users surveyed said they felt they weren’t a danger on the road after consuming, relying on personal experience instead of government information to determine their impairment.

And it’s not just Coloradans. According to a report from the Centers for Disease Control, 13 percent of nighttime and weekend drivers in the U.S. have cannabis in their system. Spoiler alert: I am one of these people. I didn’t participate in the survey, but I’ve been stoned almost every day for the past five years, so like, I get it.

I also believe in the need for a reliable roadside test that can identify drivers that are too high to be operating a motor vehicle. The test doesn’t exist yet because there is currently no agreed-upon blood concentration of THC analogous to the .08 blood alcohol level that can be used to determine if a person is impaired. Six states have established legal THC driving limits so far, but these limits vary widely. In Colorado, it’s 5 nanograms per milliliter of blood.

Last year, Colorado officers cited 421 people for cannabis-only DUIs, a 25 percent increase over 2017. The percentage of fatal vehicle accidents in which a driver tested positive at or above the legal limit of .5 ng/mL of THC decreased from 52 in 2016 to 35 in 2017. Drivers with some level of cannabinoid in their blood killed 139 people in 2017, according to the Colorado State Police. Of those fatalities, 67 percent involved a driver who also had alcohol or other drugs in their system.

The blood tests do not necessarily indicate impairment, only presence in the body, meaning the current laws are outdated, shrouded in stigma and lack critical research. As a medical patient with a high tolerance and an average metabolism, even when deemed sober by a doctor, my active THC levels are almost triple the legal limit. I could stop consuming cannabis today but a drug test would technically consider me inebriated 3-4 weeks from now because that’s the average amount of time it takes for THC to leave the body.

In fact, the level of cannabis that causes driving impairment in occasional cannabis users is actually lower than the residual cannabis levels found in regular users even when they haven’t consumed cannabis recently. These new findings, published in March in an American Association of Clinical Chemistry journal, add to a growing body of evidence suggesting that no legal driving limit for cannabis can catch impaired recreational users without unfairly penalizing unimpaired regular or medicinal users.

Just last week, after spending nearly two years exploring the issue, a Michigan commission tasked with studying the effects of cannabis while driving has recommended that the state not impose limits on the amount of THC that can be present in drivers’ bodies. The committee determined that while cannabis use can have an effect on driving, the level of THC in a driver’s blood is not a reliable indicator of driving impairment.

Do you hear that Colorado? It would be detrimental if people found out that Michigan has a more progressive attitude toward cannabis consumption than us. Think about our brand.

Luckily for us, the University of Colorado’s School of Public Health is conducting a study designed to learn more about driving performance under the influence of cannabis. Researchers are planning to follow subjects who consistently use daily or weekly, as well as a control group of non-users. The volunteers will take an initial sober driving test using a VR headset and an iPad to assess eye-hand coordination and eye movement. They would then be asked to consume cannabis before running through the test again while intoxicated.

Basically, they’re looking for stoners who want to get paid to smoke weed and play a hand-eye coordination game on an iPad. If you’re a cannabis enthusiast with a license to drive in Colorado, you are encouraged to apply at ucdenver.edu\drivingstudy. This is the kind of research we need to keep exploring so that we can have laws that make sense while keeping the road safe for everyone.