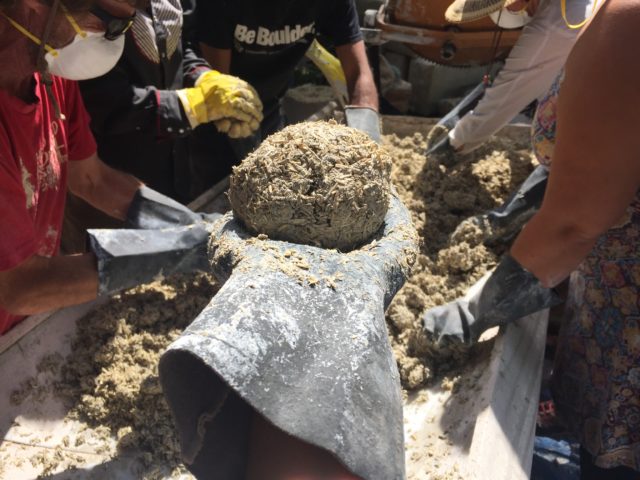 Idly standing at the end of a row of people mixing hempcrete, a building material made of hemp fiber, cement and clay, I started to form a chunk of it into a ball in my hand. By the looks of it, I expected the concoction to be slimy and viscous, but it was surprisingly dry. I was shocked at how cohesive my little sphere was, not to mention how delightful it smelled, full of the tanginess of a muddy forest. My mind begins to wander. Perhaps because my idea of a home is so distant from a forest that I think of suburbia. In crept a familiar sadness.

Whether walking in my ’70s-style neighborhood or passing through more modern developments, I’ve always felt an emptiness in America’s suburban designs. There’s a sense of disconnectedness and emptiness, perhaps intentional so that it can be cathartically filled with modern comforts. It was as if by being in my hand the hempcrete had seeped through my skin and into the very makeup of my thoughts to fracture my understanding of home.

“It takes a big person to think small,” John Patterson said. I looked up to see him, the leader of our workshop crew, standing at the helm with the mixer ready to pour another load of slurry onto a fresh pile of hemp fiber. Naively, I thought I was there to learn about the material applications of hempcrete, but looking at him I began to get the sense the material was, in its essence, defiant to those very applications.

“Hemp offers a way to re-understand the barebones, which is to say the chemistry, of our built environment,” Patterson said. “For years I worked as a carpenter and built what amounts to hermetically sealed homes. It wasn’t until I attended a green building workshop that I began to see that those buildings weren’t just inefficient, but unhealthy.

“You have to think of homes as being alive, just like our bodies. A healthy home is a well-functioning system that intakes energy and outputs waste, but more than that it has to be able to regenerate and breathe.”

The hempcrete greenhouse we were building is one such living project. Homeowners Robin and Mike White, (aka hip hop artist Mike Wird) designed the greenhouse as an earthship, a passive structure made of up-cycled and indigenous materials that someone with little or no construction skills can build. That means the building is affordable, both to build and maintain, and helps to explain how it is that half a dozen people like me — newbies to construction and earthships alike — came to be entrusted with the project.

Robin explains it is Patterson who helped to open the couple’s eyes to how hempcrete could best be integrated into their already established interests in earthships and permaculture. They attended one of his workshops and wanted to get involved in hosting similar events that provide education by way of hands-on experience in regenerative design. She shrugs at how small and simple the greenhouse project is, but still she appears undeniably excited by all that it represents.

Her husband chimes in: “The point of the building is the same as the point of our lifestyle — to realign with the forces of nature. Before we could design it we had to make some basic observations about our environment. How does the sun behave as it moves across the sky? How high does it get in the summer solstice and how low in the horizon does it dip in the winter? Where does the rain naturally pool? It’s only then that we can design something that will keep plants cool in the summer, warm in the winter and well watered all year round.”

For the past five years, the couple has been busy spearheading an effort to create a much larger earthship in Denver. “After all,” Mike reminds me, “urban areas put the most strain on the ecosystem so it only makes sense that we place an example of how to soften our encounters in the middle of a city.”

The center they envision will not just be an example, though. According to the Whites, it’ll be a place that can host workshops, educate guests and inspire ideas about right living.

“If we can learn how to see it differently, we can reinvent the state of the world,” Mike says. “Reimagining our built spaces as something alive, something we are tasked with taking care of, gives you more control in your life. By making you self-reliant, it empowers you, but by teaching you your place in the ecosystem, it humbles you.”