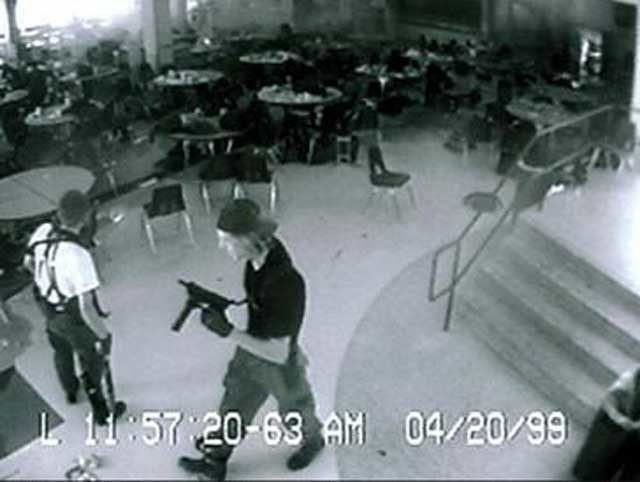 I was 16 years old when my father asked me if I wanted to be a hero.

The year was 1999, ’round about late April, and Dad wanted to talk about the shooting at Columbine High School: The one where two students killed 12 of their classmates and one teacher before turning the guns on themselves. All in all, 15 souls were lost that day, 21 were injured physically, countless more mentally.

Back then, school shootings were a bit out of the ordinary. They weren’t unheard of — a shooting at a middle school in Jonesboro, Arkansas, the previous year left four students and one teacher dead — but this was something else. This was carnage: Complete with plans, tactics, modified firearms and homemade bombs. For the students and faculty of Columbine, the events were a cataclysmic shock to the system. To outsiders, the overwhelming presence of evil seemed insurmountable. The two shooters pretty much did what they pleased until they decided to do it no more. No one stopped them; no one could.

It would take time for the stories to trickle out. In the following weeks, months and years, we would learn of little heroics: Acts of faith and defiance that would give a fractured community some semblance of resilience. There were indeed heroes on that day; they just now slept six feet under.

But when Dad asked me all those years ago if I wanted to be a hero, we didn’t know any of that. We just knew that Eric Harris and Dylan Klebold shot the living hell out of the school cafeteria and library, killing their fellow students in the process. The whys were still murky, as were the hows. And my father was busy spinning over and over in his head if they could’ve been reasoned with. Or stopped.

Whenever people tell me fantasies of heroics, I always think of the same World War II movie; this big, sweeping Hollywood epic with a cinematic reenactment of June 6, 1944, the day (a Tuesday, no less) Allied forces stormed the beach at Normandy, France. Thousands were killed; many never reached the shore. Amid the chaos and carnage, the camera finds a soldier, dead as a doornail, lying in the surf. On his wrist is a watch, a watch that continues to tick — counting all the seconds the soldier no longer can. Dad used to wear a watch. I don’t think he does anymore, but I’m sure if he was wearing one on April 20, 1999, and he happened to be in Columbine’s lunch cafeteria, and he happened to throw a chair at either Eric or Dylan or both, and he happened to get that pocketknife out of his jeans, and he happened to remain calm and cool and collected, then there is little doubt in my mind that he would also be dead on the ground, his watch counting all the seconds he could not. You don’t bring a knife to a gunfight; another movie taught me that.

Dad’s fantasy didn’t sit well with me. But a lot of things didn’t sit well with me back then. It’s a weird thing to be 16 years old and go to that many funerals. Like all the other weird things that happened that April, I packed it away, marked it: “To be opened at a later date,” and shoved it deep down. So deep, I forgot about it for 20 years. Forgot about it until July 23, 2019, the night I saw Once Upon a Time…in Hollywood. My later date had arrived.

Most people watching Once Upon a Time probably know who Tate was because of how she died. It’s what makes the final hour of Once Upon a Time almost unbearable; writer/director Quentin Tarantino turns the screws while counting down those fateful final moments. The first two hours of the movie are an acutely observed meditation on age, uselessness and obsoletion. Watch the movie once, and it seems luxurious, indulgent, lazy even. Watch it again and it’s surprising how tightly constructed each scene, each piece of information is revealed and delivered. And just when you think you’re going to be trapped with these two drunks (charming though they may be) while one of the 20th century’s grizzliest murders goes down across the cul-de-sac, those three miserable Mansonites — Tex Watson, Susan Atkins and Patricia Krenwinkel —walk through the door of Dalton’s house and find Cliff and his loyal pit-bull, Brandy, instead of Tate and her house guests. The fantasy has begun.

And, here, our two stories merge.

Cliff may be high on LSD, and holding only a can of dog food — Wolf’s Tooth, as the label reads: “Good food for mean dogs” — but he still has a presence. Cliff may be a creation, a figment of Tarantino’s mind, but he’s played by Brad Pitt. And a 50-something Pitt is a formidable thing. More so when he stands there tall and arresting — bright white jeans radiating in the dark Los Angeles night, skin-tight shirt clinging to his frame, and that perfect Brad Pitt hair swept just so across his movie star face.

Tex, on the other hand, has a lanky build, stringy hair, sunken eyes and an all-black get-up. The revolver he holds is so big it’s a wonder he can keep it steady. He looks like a hero’s wet dream of a villain — a punk-ass kid in need of being taught some manners.

Eric and Dylan were also clad in black when they took Columbine by storm. But they came armed in combat boots, military fatigues and black trench coats. Tex looks like he’s working stage crew for the drama department by comparison.

Oddly, Tarantino’s revisionist fantasy plays a similar tune my father hummed 20 years ago: Cliff — with the help of Brandy the pit-bull, and a well-timed sucker punch from Francesca, Dalton’s wife — dispatches the lot of them. There’s even a knife in the leg; two, in fact, and Cliff’s on the receiving end of one of them. I wonder, did Dad think he would get injured? Probably. No blood, no foul, as the saying goes. But I know he didn’t envision a flame-thrower (Dalton has one in his tool shed, it’s a long story), only Tarantino could have conjured that one up.

Regardless of hardware, the ends are the same: The villains are vanquished, the innocent live to see another sunrise and history changes course. Once upon a time, indeed.

Cliff and Dalton going to task on the Mansonites is fantasy enough, but it’s the how that reinforces the fantasy. Had Manson’s devotees entered the wrong house in the wee hours of Aug. 9, 1969, then it’s pretty plausible that they would have killed whoever lived there as well — even if it was an ass-kicking stuntman they walked in on. Tex has a gun, after all. Cliff just has a can of dog chow.

I see a lot of my father in Cliff. The story my father told me back in ’99 is similar to Tarantino’s fantasy. It’s the old: What does it take to stop a bad guy with a gun? Answer: A good guy with a gun. Or a can of dog food. Maybe even a pocketknife.

Maybe there are good guys with guns out there, but it seems like they’re on an extended vacation. I wish they would punch back in. Things are getting worse. I’ve thought a lot about my father’s fantasy in the past few months. At first, it made me feel icky. My father was in his late-30s at the time of the shooting — and here he was thinking about smacking the shit out of a couple of teenagers. Maybe even ending their lives. But the violence he concocted was a means to an end. He was trying to protect the kids who were there. He was trying to protect me from harm. Any father would.

He didn’t have to. I, and about a hundred students and teachers fleeing the east side of the building, were out the door, down the hill, across the street, and into the adjacent neighborhood before the shooting really got going. Eric and Dylan were still stalking the hallways and executing our friends by the time a group of us found a kind stranger who let us into her house. She let us use her phone to call home. To let our parents know we were OK. And to let them know they could start fantasizing about how they might have prevented this from ever happening.

It’s been over 20 years since I ran from my morning math class to the sound of gunshots splitting the spring air. Twenty years and people are still arguing over how to prevent that from happening again. Everyone has a different answer. Some think it’s discipline, obedience and prayer. For others, it’s a bizarre totalitarian state where everyone is a potential shooter until proven innocent. For others still, it’s that good-looking guy in white ready to leap into action at a moment’s notice. It’s been 20 years, and no amount of discipline, obedience or prayer has slowed the shootings. Twenty years and even the hint of a totalitarian state makes people’s trigger fingers itchy. Twenty years and our hero in white is still a figment of the cinema and a few fathers’ imaginations. It’s been 20 years; I think it’s time to try something else. The old ways aren’t getting the job done.