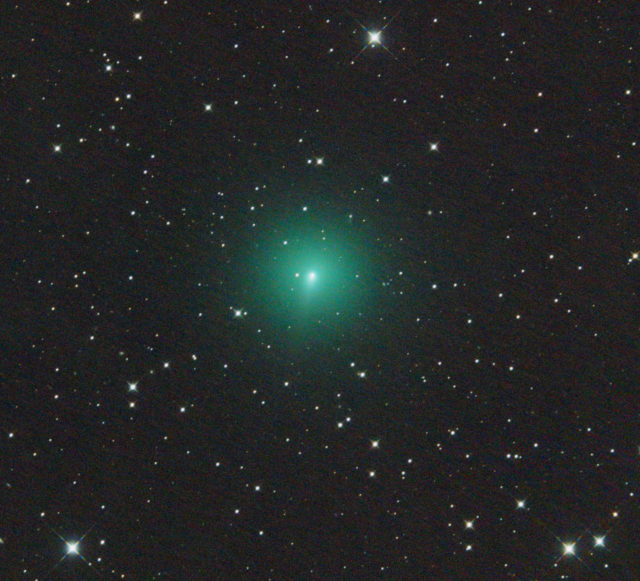 In late December 2019, a telescope in Hawaii operated by the Asteroid Terrestrial-impact Last Alert System (ATLAS) discovered a comet on its way to the inner solar system. During the first few months of 2020, the comet grew more than 50,000 times brighter, raising hopes that it might become visible to the unaided eye during its closest approach to the Earth in late May. If it continues to brighten, it will be the first comet to be visible without a telescope in more than 20 years.

The ATLAS project was designed to find small asteroids that are on a collision course with our planet. It began operating shortly after a space rock the length of a bowling lane exploded over Chelyabinsk, Russia, in 2013, accompanied by a sonic boom that caused more than $30 million in property damage around the city. While other telescopes search for the rare large asteroids that might trigger a global catastrophe, ATLAS serves as an early warning system for the abundant smaller objects that could inflict regional damage. The project can provide a three-week warning of an asteroid the size of a football field, a one-week warning for a rock as big as the Arc de Triomphe in Paris, and a few days warning for something like the Chelyabinsk event.

Comet ATLAS never posed a threat to the Earth, but it turned up as one of the faint moving objects that the survey was tuned to reveal. At the time of its discovery, the comet was about as bright as a match flame in New York viewed from San Francisco. But as it gradually came closer to the Sun over the past few months, the dirty snowball from the edge of the solar system brightened dramatically while heating up and starting to evaporate. By early April it was visible in binoculars, sporting the nebulous tail that distinguishes comets from other space debris.

“Comets are things that have been kept in the deep freeze for a long time. It’s kind of like finding fossils showing what the solar system was like 4.5 billion years ago,” says Joel Parker, director of the Planetary Sciences division of Southwest Research Institute (SWRI) in downtown Boulder.

Parker grew up in the Bay Area, and he earned a degree from the University of California Berkeley before coming to the University of Colorado in 1986 for doctoral research. After finishing his Ph.D. in astronomy, he spent several years working at NASA’s Goddard Space Flight Center in Maryland before returning to Boulder in 1996 to join an upstart planetary sciences group at SWRI. He has worked on the New Horizons mission to Pluto, and the European Space Agency’s Rosetta mission, which landed a probe on a comet in 2014.

Historically, comets have been considered messengers of doom. Before television displaced the night sky as a primary source of entertainment, the ancients interpreted the dances of bright planets against the backdrop of fixed stars as the stories of gods. The movements of the planets were periodic and predictable, so anything that violated the established patterns was seen as a bad omen. Edmund Halley identified the only comet that is regularly visible to the unaided eye, and it only returns every 76 years, too long for most sky watchers to see a pattern.

The last comet that was easily visible from the northern hemisphere was Hale-Bopp in 1997. Its passage was marked by a bizarre ritual suicide involving 39 members of the Heaven’s Gate cult in southern California. They believed that there was a UFO traveling behind the comet that would take them to a “Next Level” afterlife, and that they needed to liberate themselves from their bodies for the journey. The group went out for a final meal together before putting on identical black track suits, downing some barbiturates with vodka, and asphyxiating themselves. About a week later, comet Hale-Bopp became a spectacular sight, shining brighter than almost every star in the sky with a dust tail stretching halfway from the horizon to the zenith.

“Comet ATLAS now looks like it is breaking up. It has fragmented and it is disintegrating,” Parker says. “But it certainly should be visible with binoculars or a small telescope. If people can get somewhere away from their local street lights, even a backyard is fine.”

In early April, astronomers from around the world confirmed that comet ATLAS broke up into at least three or four smaller pieces, dashing hopes that it might continue to brighten. It currently appears between the Little Dipper and the constellation Auriga, about the same distance in the sky from the north star as the Big Dipper. Because it is entering the solar system from above, it will continue to be visible in the evening sky through the middle of May. Its closest approach to the Earth will occur on May 23, and it will swing around the Sun about a week later and reappear in the morning sky by early June.

“When a comet breaks up, it exposes a lot of material that has not been exposed to the Sun before, so very often there will be a burst in activity,” Parker explains. “It’s possible that it could get brighter.”

At this point, most astronomers are not holding out much hope. The latest predictions show comet ATLAS gradually fading to about one-sixth of its peak brightness over the coming month, despite getting closer to the Earth. By the end of May, it is expected to be too faint to see with binoculars, even from a very dark location. On average there is a comet visible to the unaided eye once every 10 years, so we are already overdue. If comet ATLAS doesn’t put on a good show, it’s only a matter of time before another relic of the ancient solar system comes our way.