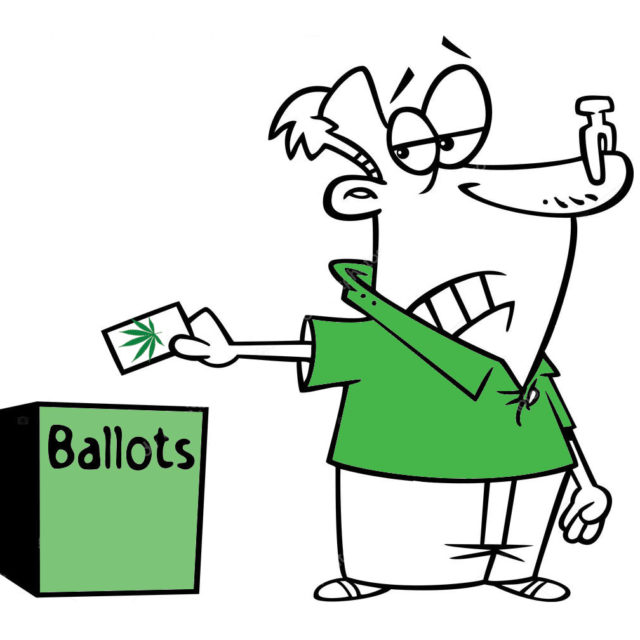 Writer Tom Angell, founder of the nonprofit Marijuana Majority and editor of the cannabis news portal Marijuana Moment, pointed to the outcomes of the gubernatorial races in Virginia and New Jersey, and to local races in Philadelphia, Detroit and Athens, Ohio, as results that will have “huge implications” for the marijuana legalization movement.

Let’s start with the local races.

In Philadelphia, Lawrence Krasner, an outspoken advocate of non-enforcement of laws against marijuana use, was elected district attorney. “One of the things we see in other jurisdictions is that where marijuana is readily available there’s a 25 percent reduction in opiate/opiod overdose deaths,” he said. “So if Philadelphia is looking at 500 opiate/opiod overdose deaths a year, a district attorney, by choosing not to enforce against marijuana usage, can potentially save 125 lives. That’s what a district attorney should exercise his or her discretion to do.” Krasner beat his Republican opponent by a 3-to-1 margin.

In Detroit, voters strongly approved two measures that will allow medical marijuana businesses to operate in more areas of the city and stay open longer. Recreational marijuana legalization is likely to be petitioned onto the Michigan ballot next November, and the Detroit results are seen as good news for the state initiative.

In Athens, Ohio, home of Ohio University, voters approved a city ordinance to completely eliminate fines and court costs for possessing and cultivating up to 200 grams (about 7 ounces) of marijuana. The vote was 77 percent to 22 percent in favor.

The results in Virginia and New Jersey were even more significant.

In Virginia, Democratic Governor-Elect Ralph Northam had made marijuana decriminalization a centerpiece of his campaign, emphasizing the disproportionate number of black Virginians who are arrested on marijuana charges in the state. Blacks are 2.8 times more likely to be busted for pot than whites in Virginia.

“We need to change sentencing laws that disproportionately hurt people of color,” he wrote on a blog post. “One of the best ways to do this is to decriminalize marijuana.”

However New Jersey was the state where legalization scored its biggest win, with the election of Democrat Phil Murphy over Republican Lieutenant Governor Kim Guadagno by a margin of 56 percent to 42 percent.

Murphy explicitly promised to sign a bill to legalize recreational marijuana in New Jersey if elected, something outgoing governor Chris Christie said would happen over his dead body.

Christie was term-limited, but he will be leaving office about as popular as a dead skunk in the middle of Thunder Road (he had a 14 percent approval rating in a poll released on Election Day).

Guadagno’s stand on marijuana was that she favored decriminalization but not legalization, a stand that didn’t win her many votes on either side of the issue. But her biggest problem was that as Lieutenant Governor she was chained to Christie’s record, including his zero-tolerance pot prohibitionist views.

New Jersey Senate President Steve Sweeney (D-Gloucester) says his goal is to have a legalization bill passed and on Murphy’s desk within 100 days of him taking office (on Jan. 16, 2018).

This is a big deal. It means New Jersey is on track to become the first state to legalize marijuana through an act of its state legislature as opposed to a vote of the people. That should give a big boost to legalization efforts in other states which, like New Jersey, don’t allow citizen-originated ballot initiatives.

In states like New York and Pennsylvania, for instance.

New Jersey is right across the river (the Hudson) from New York City. It is also right across the river (the Delaware) from Philadelphia. Marijuana legalization in New Jersey will put major pressure on New York and Pennsylvania to follow suit, both because of the loss of tax revenue and the vastly increased difficulty in enforcing pot prohibition when legal marijuana is available across a river from each state’s largest city.

New York and Pennsylvania are unlikely to legalize in 2018 — mostly because of opposition from their governors — but legalization in New Jersey makes it a virtual certainty that marijuana legalization will be a front-and-center issue in their 2018 state elections.

Both Pennsylvania Governor Tom Wolf and New York Governor Andrew Cuomo favor decriminalization but not legalization. Cuomo is up for re-election next year. It’ll be interesting to see how far he gets using Guadagno’s playbook.