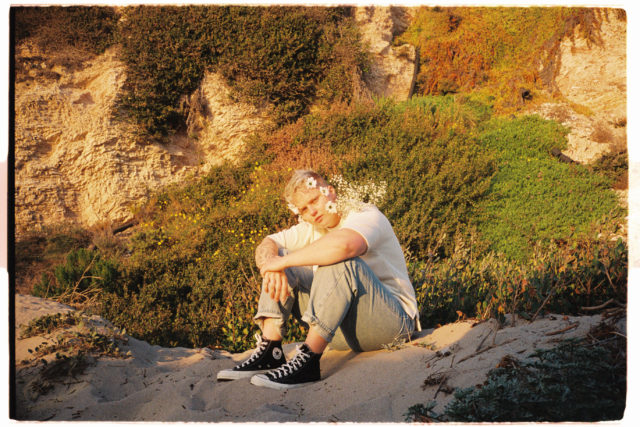 At just 23, Finnish-American nonbinary artist Miki Ratsula is ready to take on transphobia in the music industry—and the culture as a whole—with their idyllic pop vocals and tender lyrics about life and love. The art of self-revelation takes center stage in their debut album, i owe it to myself, released March 25.

“I feel like I’ve been told too many times to tone my queerness down, to not be so open about it,” they say. “And with this album, I allowed myself to not listen to that and to just be as proud and open as I want to be.”

Set to lo-fi pop sounds both subdued and energetic, Ratsula creates an intimacy between singer and listener, an affection for honesty and authenticity that marks their own personal growth and the shifting narrative of Gen Z artists en masse. It is a candid reflection of Ratsula’s own life, from coming out to top surgery, from falling in love with their fiancé to finding self-love and acceptance on their mental health journey.

“I see this album as the first step, the first project that’s really showing the world and the industry who Miki Ratsula is,” they say.

It’s in the topic of exploring mental health through music that I find myself, for the second time in our conversation, reflecting on my own adolescence and early-adulthood. I came of age in the grunge and emo era, when angst, personal struggle and disillusionment were expressed through melancholy. There were hints of vulnerability—an attempt to begin unpacking mental health and frustration and alternative lifestyles—but it didn’t come from a place of ownership, self-care or affirmation. It was largely depressing, to be honest, and some of my favorite artists eventually died by suicide or overdose.

“Mental health has become a lot less of a taboo subject,” Ratsula says when I share this. “I think people, my generation and younger, are really aware of mental health and are working to destigmatize taking care of your mental health and getting help. … And I think that’s definitely influenced a lot of young writers to be able to finally write and sing about mental health in a way that other people can understand.”

Songs like “Serotonin” by Girl in Red and “Now I’m in it” by Haim, along with works by artists like Demi Lavoto and Ratsula, speak about the realities of inner dialogues and the importance of self-care.

Growing up in Orange County, California, Ratsula began questioning their queerness in high school, but found it challenging in that culture—some folks may have been “accepting,” but, for the most part, Ratsula was surrounded by “white, Christian, Republican families.” They didn’t have any close friends or anyone else they knew of who were queer or even thought about queerness. It was an incredibly lonely thing to navigate, and they felt very “side-lined in that environment.”

“And it definitely took me a lot longer to accept it and to realize it because of that environment,” they say.

I also grew up in Orange County. Even though it’s been almost 20 years, it sounds familiar. Several good friends from high school only later came out as queer. I personally never witnessed any overt or menacing homophobia, but in the generation of My So-Called Life and Rent, having queer friends didn’t necessarily seem possible in our manicured (manufactured?) community. Neither did the level of vulnerability Ratsula shares.

“It’s also interesting because, you know, Orange County is still in California. And so compared to a lot of other places in the country it’s still relatively safe,” they say. “I think the hard part was, it was a lot of covert queerphobia. It felt very surface level and felt secretive, almost. So like, I didn’t know who to trust, who actually was cool and who wasn’t.”

It wasn’t until Ratsula met their first girlfriend—now-fiancé—halfway through the last year of high school that they came out, surprised at how “chill” most everyone was.

Coming out as nonbinary, however, “was definitely a lot harder,” they say.

Within their own family, they knew they would be accepted. Ratsula is currently planning their wedding in Finland next summer, where their father and most of their family lives. While their parents immigrated to California about a decade before they were born, Ratsula grew up in a very Finnish household, learning Finnish and English simultaneously and traveling to the Nordic country every summer, finding safety and peace at the lake on their grandmother’s property.

“Being Finnish and being raised Finnish and visiting Finland all the time gave me such a respect for nature and such a tie [to] nature,” they say. “As I get busier, I kind of seek that type of environment.”

Motifs like greenery, water and open fields find a place in Ratsula’s music, inspiring their visuals, storytelling and overall texture. There’s also an appreciation for the humanity of people they say comes from Finland’s robust sauna culture, a practice of sitting together, naked, connecting and appreciating each other.

“At the core of it, [we’re] just human beings on planet Earth,” they say. “There’s something so peaceful being in the sauna with someone and just, like, talking about anything and everything, and just being open in such an authentic and pure way.”

They were also heavily influenced by pop music, introduced to acts like The Beatles and Stevie Wonder by their father, and later obsessing, in their own words, over Adele.

Ratsula released a cover of “Rolling in the Deep” on YouTube in middle school and began exploring their own songwriting soon after. At the same time, they started posting rewrites of popular songs, written especially for the U.S. woman’s soccer team (the first time they saw queer women publicly). All in all, Ratsula says they posted about 40 unique songs to their YouTube channel, creating quite a following with that certain sector of fandom through social media.

“I kind of say it’s like my Disney channel phase,” they say with a laugh. “And I kind of just kept following that while figuring myself out and growing up.”

With the release of i owe it to myself and a national tour that brings them to Denver on April 30, Ratsula has finally come into their own.

Send letters to the editor to letters@boulderweekly.com