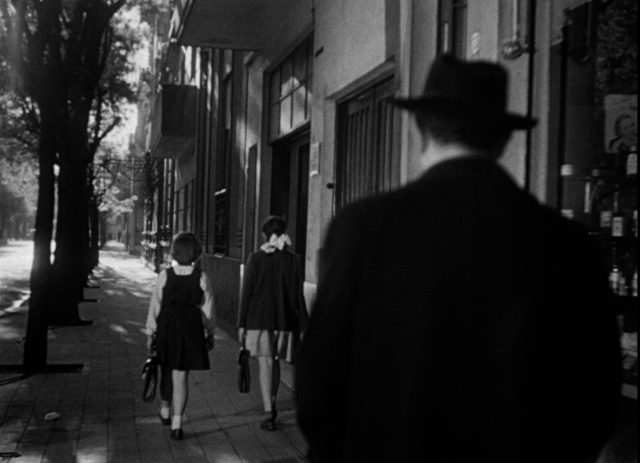 The man looks unassuming. He’s Teodoro Ulber (Nathán Pinzón), a middle-aged English professor, short and squat with proper manners and nice clothes. He’s timid in the company of women; reserved around men. But little children seem to like him, even trust him. Right up to the moment he cuts their throats.

Much like Truman Capote’s seminal In Cold Blood, 1953’s El Vampiro Negro (The Black Vampire) from Argentinian filmmaker Román Viñoly Barreto is a masterwork that tests the limits of what you might consider “entertainment.” The story retells Fritz Lang’s 1931 German film, M, about a sick man compelled to kill children. Based on two real-life killers and set during the Weimar Republic, M draws parallels between the killer and a deranged society seeking to dole out justice by hook or by crook. Two decades later, Hollywood director Joseph Losey remade M, this time casting the corrupting presence of communist witch-hunts over the proceedings.

This might be why Barreto’s take on the compulsive child killer is the fullest and most empathetic portrait of the three versions. And not by further investigating Ulber’s condition, but by placing front and center the women sidelined in previous versions. Specifically, two cabaret singers: Rita (Olga Zubarry) and Cora (Nelly Panizza). One shields Ulber from harm, while the other chides and humiliates him. It’s quite a reversal when you realize that the one chiding Ulber does so to the public persona, while the one shielding him does so in the face of Ulber’s true nature.

Roger Ebert called movies “empathy machines.” It doesn’t matter who’s on screen, what they have done, or what they will do; cinema asks us to watch, to identify, to understand. Most of the time, we walk away feeling better — about ourselves and about the world — but sometimes, the movies ask us to consider the unthinkable; to look at a monster and find the broken humanity underneath.

El Vampiro Negro belongs in that conversation. The characters are richly drawn, and Barreto further twists the proverbial knife by juxtaposing Ulber with the lead investigator (Roberto Escalda) tasked with capturing him. Where Ulber is helpless to the voices in his head urging him to commit unspeakable acts, the inspector chooses the path of superficial righteousness while acting in his own shallow interests.

And with subject matter this unnerving, but artistic value this stunning, we must be in noir territory. Barreto and cinematographer Aníbal González Paz pay homage to the German expressionism of Lang’s M with chiaroscuro lighting, wrought-iron shadows and a subterranean world so dirty you want to wipe your shoes on the way out. It’s incredible. And it would’ve been lost if not for the championing of Argentina’s leading cinema archivist, Fernando Martin Peña, restoration work by the Film Noir Foundation and the UCLA Film & Television Archive and a gorgeous new Blu-ray/DVD set from Flicker Alley.

ON DISC: El Vampiro Negro, available in a Blu-Ray/DVD set from Flicker Alley. Bonus material includes an introduction from Noir Film Foundation president Eddie Muller; “The Three Faces of M,” a critical comparison; an interview with Daniel Viñoa; commentary by Fernando Martin Peña; and an essay by Imogen Sara Smith.