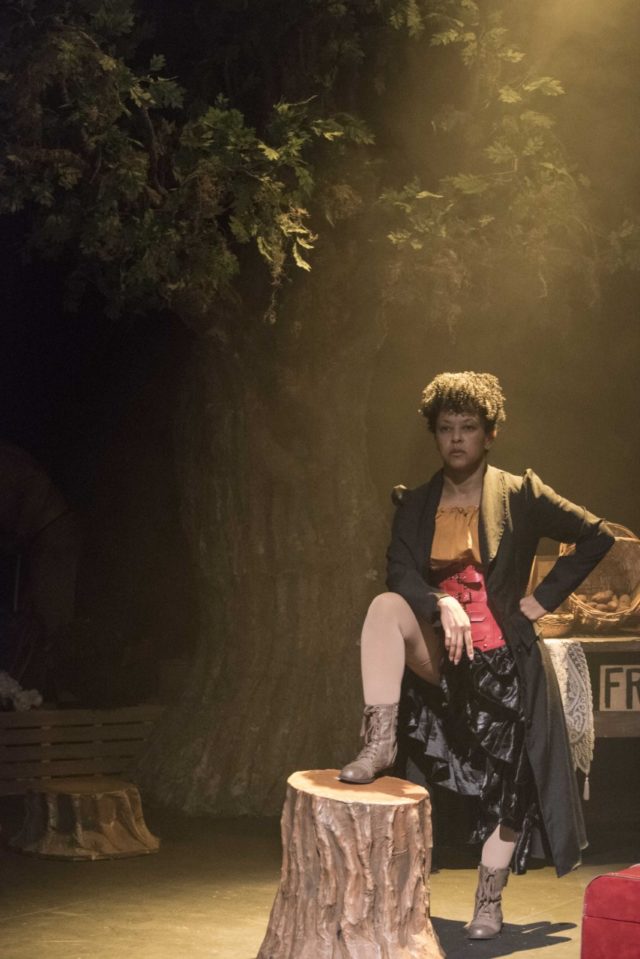 Before she wrote One Way-Back Day—the most recent production by Boulder’s Catamounts theater troupe—Tresha Farris was questioning her writing ability.

“I had a bad interaction with a professor about my writing,” the Denver-based actor explains. “I was a little disheartened.”

But her father, himself a writer, pushed her “to go back to the pen,” Farris says. “I decided I had to find a project I was really interested in doing.”

She turned to her childhood for inspiration, to a collection of African American folklore by Virginia Hamilton called Her Stories. Farris took her concept to rework these stories—with African, Black, Gullah, and GeeChee roots—to The Catamounts, where she assembled a team of non-white writers to help her bring them to life as One Way-Back Day, now showing at The Dairy Arts Center through March 19.

At the center of the story is Lettice (a beguiling Colette Brown), a 110-year-old Black matriarch who has lived through slavery, the Civil War, both world wars, and now the Great Depression. Sitting on the front porch of her home, all Lettice wants on the day we meet her is a bit of light bread and some cheese. But this country has never been giving to Black folks—only taking—and getting her bread and cheese is no easy task.

For decades, Lettice and her family have been visited by a mythical entity called Boo Hag (an impish Farris), an energy vampire, we might say today. Lettice is full of stories from a century of life, and Boo Hag wants them all, no matter how Lettice feels about it.

Lettice is based on a real woman who sat for an interview for a New Deal program called the WPA Writer’s Project, which collected stories from America’s past, including narratives from formerly enslaved people.

“They would send people out to interview Black people and get these stories, their accounts of when they were in slavery,” Farris explains, but often the stories would be recast in a racist light. Books were made from these collected narratives and sold around the country, but those who shared their stories never saw a dime.

“I have Boo [Hag] as sort of a representation of this organization that basically appropriates your culture, your history, and resells it to you,”

It’s not hard to draw a straight line from the past to the present; Black culture has always been appropriated by and capitalized on by white America, whether it’s the WPA or the Kardashians.

And while it’s impossible to ignore the trauma of 400 years of slavery (“Maybe we were better off as slaves,” Lettice wonders aloud as we first meet her), One Way-Back Day also offers stories of Black joy and transcendence, particularly for Black women.

“This play started, for me, as an ode to Black women, particularly my mom and my sisters,” Farris says. “I think it’s ultimately about credit and proper credit. In lots of moments, Lettice says, ‘I’m giving you my life, my memories, and I just want this one thing; I just want my cheese and bread.’ She wants to be given proper credit for the life she lived, and she never gets that. Especially with Black women, we never get the proper credit.”

It’s a reality that The Catamounts is trying to unravel with projects like One Way-Back Day.

“Part of our journey has to be sometimes totally turning the space that The Catamounts have created completely over to non-white voices,” says Cats’ artistic director Amanda Berg Wilson. “It’s part of the dismantling. We’re stumbling, but trying to stumble forward.”