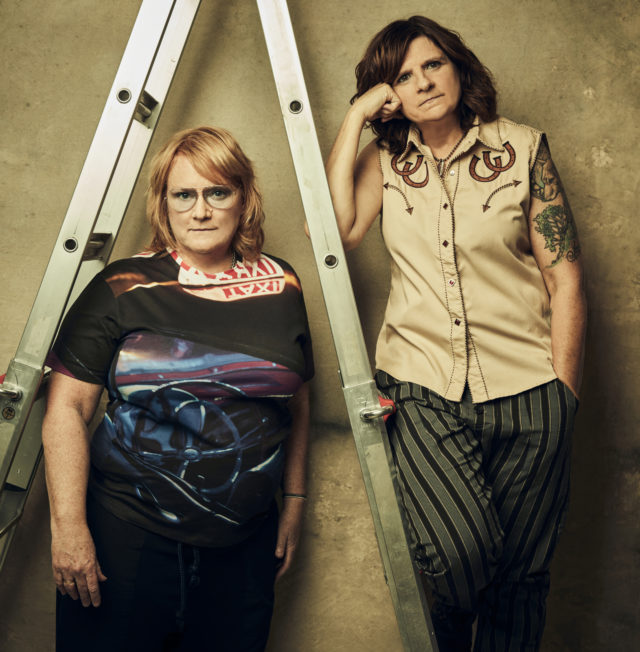 Most musicians found their activities curtailed during the pandemic. For the Indigo Girls, the past two years have been a particularly busy season.

The duo of Emily Saliers and Amy Ray just released a livestream project, Look Long: Together, that took a year and a half to complete. They’re the subject of an upcoming documentary film, and had their music reinvented for the jukebox musical movie Glitter & Doom. Saliers has been writing music for two stage musicals and Ray will soon release a new solo album.

That’s quite a busy schedule, even for an act like Indigo Girls, who have been consistently active since releasing their first album, Strange Fire, in 1987. Most bands that debuted around that time—if they’re still together—now only sporadically make albums (if at all) and are considered heritage acts. That’s not Indigo Girls.

“We still feel like we are a working band,” Saliers said in a recent phone interview. “We tour and we make albums and we work, and that feels good.”

This latest spate of activity has come on the heels of the release of the 16th Indigo Girls’ studio album, Look Long, which arrived in May 2020.  A stirring effort, Look Long not only features highly melodic folk-pop (on songs like “When We Were Writers,” “Look Long” and “Sorrow And Joy”) that has always been an Indigo Girls signature, but rhythmically creative songs that touch on hip-hop (“S**t Kickin’”), Caribbean music (“Howl At The Moon”) and catchy upbeat rockers (“Change My Heart” and “K.C. Girl”).

But by the time Look Long was released, the pandemic had scuttled plans for a full-band tour to support the album. Now Saliers and Ray, along with long-time violinist Lyris Hung, are making up for that lost tour, following up some 2021 shows with an extensive tour this summer in support of Look Long. Saliers said the show will feature about five songs from the latest album along with a generous selection of back catalog material, all featuring Hung.

“She’s a force,” Saliers said of Hung. “She has such a musical palate and all different sounds on her violin and her fingertips, and just a remarkable musician. She really elevates our show every night.”

Next year, Indigo Girls hope to do a full-band tour.

“Some people like the band and some people like us acoustic or just stripped down,” Saliers said. “We just haven’t had the opportunity to tour with the band because of COVID and we really miss that. So it was good to put out the streaming concert and it will be great to get back with the band next year.”

That streaming concert, Look Long: Together, debuted May 8 on the VEEPS platform and features a career-spanning set of songs (some of which feature appearances from guests Becky Warren Tomi Martin, Trina Meade and Lucy Wainwright Roche) combined with commentary about the songs from Saliers and Ray. Because of the pandemic, performances had to be woven together from separate film shoots to create full-band live versions of songs.

The first step in the process was filming Saliers and Ray playing songs as a duo.

“On some (of those) tracks, we sent them to the players and they listened to our version and played their parts live,” Sailers said. “Then that all got mixed together. Then on other versions, the rhythm section went in first, at least on the recordings, then Amy and I played to the rhythm section live.”

After the footage was complete, extensive editing followed.

“Amy and I spent hours and hours watching it come together, making suggestions, ‘Let’s do a split screen here,’ ‘The lighting needs to be fixed (here),’ This camera angle is no good, let’s use this shot,’ all these meticulous choices you have to make,” Saliers said. “In the end, we worked so hard on it, we were actually a little discouraged at the eleventh hour. And then watched it and were really pleased with it.”

The year and a half of work that went into the livestream took up some of the pandemic-forced downtime. Saliers also spent considerable time working on two musicals that she hopes might eventually get to Broadway.

“One of them is tentatively called Country Radio,” Saliers said. “It’s the story of a young queer girl growing up in the South and her journey. And she’s also a writer and has a friend who is an incredible singer, and it’s her working through her love of the Southland that she knew and grew up with and all of the struggles involved with that. Then the other one is tentatively called Starstruck.”

The latter musical, Saliers said, chronicles the efforts of a park ranger and her town to be designated as a dark sky reserve while integrating a love story involving the ranger and an NPR podcaster whose arrival shakes up the town.

One thing Saliers has not done yet is write for another Indigo Girls album. Considering that Look Long was completed before the pandemic, there should be plenty of inspiration for lyrics from Saliers and Ray, both of whom have long been activists in a wide variety of social causes, including LBGTQ issues, Native American rights, immigration reform and climate change. But Saliers said she’ll need time to process the pandemic to even know what to say about the experience.

Saliers and Ray might also have to consider how to respond lyrically to the wave of conservative initiatives, the biggest of which so far is the Supreme Court ruling overturning Roe v. Wade, the landmark case that legalized abortion.

Like many pro-choice advocates, Saliers didn’t think Roe v. Wade would be overturned and is appalled at its demise. Legal access to abortion had been established law for decades with multiple subsequent Supreme Court rulings that affirmed the Roe decision. Plus, polls have consistently shown a solid majority of Americans didn’t want Roe overturned.

“But the truth is there has been a concerted effort (to overturn Roe),” Saliers said, noting that conservative politicians and activists and certain parts of the evangelical community are among those who have mounted a strategic plan to gain the power in various levels of government and the courts that was needed to target Roe and other progressive issues. “It’s been going on a long time. So while the thought before was shocking, it’s easy to understand how we’ve come to this place.”

Both Saliers and Ray are gay, and Saliers fears the conservative movement will next seek to repeal rights that the LBGTQ community, as well as minorities, have gained over the years. She and Ray plan to be active in efforts to preserve (or restore) abortion rights and to support politicians who support such causes.

“As a gay person who’s married, I’m like, ‘Is this my country?’ And that’s like a big question to ask,” Saliers said. “I understand the complexities of history and how the pendulum swings, I understand that. But when it affects peoples’ lives and there’s this huge disconnect between this small group of zealots making decisions because they’re so removed from the reality of peoples’ lives, it’s a lot to take in and a lot to live with and a lot to manage.”