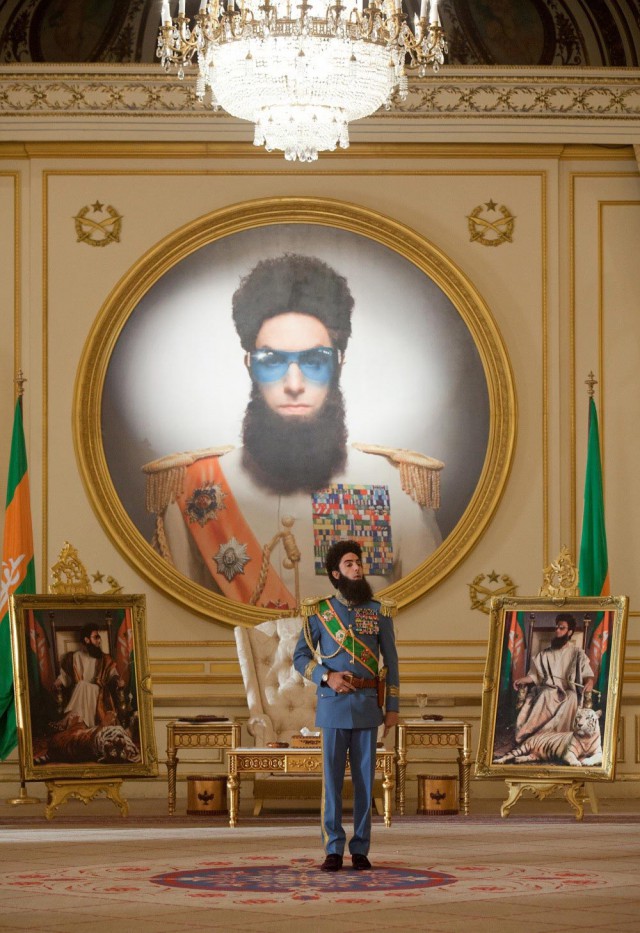 Although it turned many a talentless friend into an amateur impressionist, Sacha Baron Cohen’s performance as Borat was inarguably hilarious. The improvised, horribly racist, legitimately brilliant film that put Cohen on the map was a straight-up phenomenon and a much needed reminder that the best comedy is dangerous comedy. Even Cohen’s follow-up, BrÃƒÂ¼no, was delightfully savage, exposing homophobia with a slightly lower laugh production than his freshman work. Sadly, The Dictator is total milquetoast weak sauce.

The third wacky-character-based go-round for Cohen and director Larry Charles is easily their worst and is stunningly tepid. The idea was at least semi-ballsy: wicked oppressor of the fictional north African nation of Wadiya, Admiral General Haffaz Aladeen (Cohen), faces an internal power grab from his uncle Tamir (Ben Kingsley). With the world gripped by the Arab Spring and enthralled by the removal of cruel rulers, with little interest in what happens in the wake of said removal, this seemed a target perfectly suited for Cohen’s heavily accented and brutal schtick.

Then came the script decision that undid the film: Aladeen is replaced by a doppelganger and left penniless on the streets of New York, Trading Places style. A misunderstanding results in the freedom-loathing misogynist being employed by a tree-hugging, vegan feminist named Zoey (Anna Faris). Mashing up The Odd Couple and Coming to America is antiedgy, even when you throw in what could be the first birth scene shot from inside a vagina.

The Dictator contains exactly one impactful scene, in which Aladeen explodes the fallacy of democracy’s perfection while describing his oppressive regime, and one edgy satirical joke, when Aladeen asks a pregnant Zoey, “Are you having a boy or an abortion?” The rest of the gags are stale, recycled or flat.

Considering that mockery of brutal rulers is probably the most frequently practiced comedy in the world, it’s shocking how little range the film has.

The writing essentially neutered the film in shifting locale from the fertile comedic crescent to the home of nearly all fish-out-of-water. In concept, this film could have mocked not only dictatorial excess but the flaws of revolution, the failure of the majority of Americans to process events abroad and the similarity between military warlords and our elected officials. Instead we get copious jokes about Zoey’s tiny boobies and Aladeen’s tiny ding-dong. Oh, how daring! Kubrick dropped Doctor Strangelove two years after the Cuban Missile Crisis. Chaplin unleashed The Great Dictator while Hilter was in office. The most powerful, brilliant works of comedic fiction are biting and timely. The Dictator could have been both. As it stands, it is just moderately amusing and lucky that it was released in the wake of the colossal stink bomb that is Dark Shadows. To put it another way, there’s a reason Chaplin’s Dictator got to use the descriptor “great” and Cohen is still searching for the right adjective.