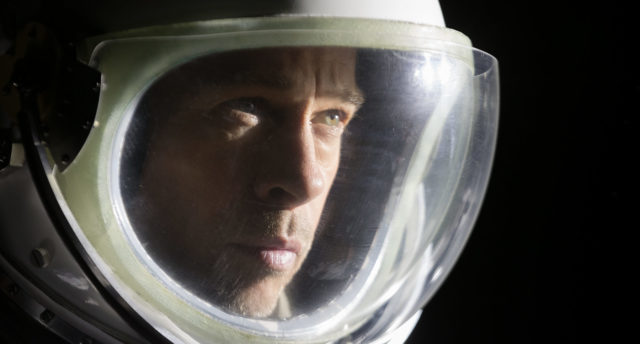 Ad Astra, the latest from filmmaker par excellence James Gray, opens with a shot of the cosmos, vast and terrifying. As the camera pans across the twinkling dots of a thousand suns, a lens flare catches the frame and briefly illuminates the reflection of United States Major Roy McBride’s face inside his helmet. It’s a moment of beauty, and an echo of the infamous Star Child from the end of 2001: A Space Odyssey.

There are other echoes and reflections of Stanley Kubrick’s 2001 in Ad Astra, notably the presence of a nuclear device. But where Kubrick saw nuclear weapons as the end of humanity, Gray sees them as a tool — one that will bury the past and save the future.

Brad Pitt plays Roy, the son of Clifford McBride (Tommy Lee Jones). Father McBride was the greatest astronaut in the history of the space program. He was the first to go the farthest, making it to Neptune, where a space station can search for intelligent life without the interference of the Sun’s magnetic rays.

But Papa McBride was a lousy father. And, like a lot of sons with lousy fathers, Roy followed in his footsteps and tried to understand him. He, too, left life and love behind and looked to the stars: ad astra. And he, too, walled himself off from the world surrounding him. And so, two marriages failed, first of the father, then of the son, against the same mythic backdrop.

Now Roy’s call to action comes when electromagnetic surges start wreaking havoc on Earth and killing millions. The source of these surges: McBride’s station orbiting Neptune. If they don’t stop, the surges will destroy the solar system, so the U.S. government calls on Roy to head to Mars and establish contact with Dad.

At this point, it should be evident that Ad Astra isn’t so much about the science of space and space travel as it is about the spaces between people; about the ability to move beyond one body and to another, and how the emptiness of space manifests the crushing loneliness of total and complete isolation depression brings about. An isolation we feel even with our loved ones near, and a depression that controls, confuses and corrupts.

All the while, Gray pays close attention to physical space traversed: From rocket to rover, walking to swimming, flying to falling. Roy’s journey takes him from Earth to a corporately colonized Moon to dark and expressionistic Mars and beyond. All stunningly shot by Hoyte Van Hoytema, who captures these worlds through refractions and reflections. Watch it in IMAX, and the images will swallow you whole.

Like the son’s journey and the father’s hubris, Ad Astra is about the search for truth. When all three find it, it’s as plain as the nose on your face. Most truths are. But how often do we look at our nose, as opposed to down it?