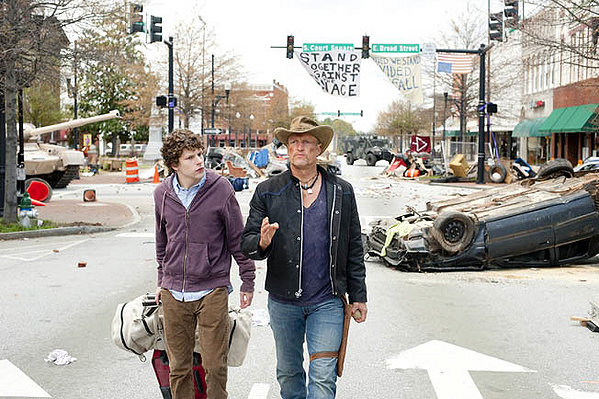 Verizon Wireless has “Friends & Family.” Sprint calls it “Framily.” Facebook calls it “Friending” (even if your own mother just “friended” you). If the 20th century focused on the nuclear family, then America in the 21st century shifted importance to those friends that comprise a family. Not necessarily a unique topic for American movies, but few drive the point home quite like Ruben Fleischer’s 2009 zombie-comedy, Zombieland, which will screen at Boulder Outdoor Cinema on Saturday, Aug. 9.

Much like the self-aware, meta-nature of Wes Craven’s Scream, Zombieland has a lot of fun with its premise. Our hero and narrator is not a rugged and resourceful alpha male, but the scrawny and timid, Columbus ( Jesse Eisenberg), a character who might seem more at home in a Woody Allen movie than the zombie apocalypse. He has managed to survive the anarchic world of Zombieland thanks to his hermit-like nature, a series of crippling phobias and irritable bowel syndrome. Columbus constructs a lengthy list of rules for staying alive in Zombieland, and they serve him well, but his rules apply to zombies. Humans, that’s an entirely different set of problems.

Columbus is slowly making his way west when he runs into Tallahassee (Woody Harrelson), a go-for broke nut who revels in the Zombie Ass-Kicking Business and, “Business is booming.” Tallahassee is also heading west — in search of Twinkies — and they form an unlikely partnership. They cross paths with sisters, Wichita (Emma Stone) and Little Rock (Abigail Breslin) who are conning their way to Pacific Playland (a theme park) and the four make a tenuous pact to travel together. They share a common enemy, but with no blood relation, no filial duty to remain loyal to one another, they are just as likely to turn on one another. This is what makes the decision to form a family even more important. It is a choice facilitated by necessity, yes, but it is a choice nonetheless.

The word “zombie” and their cinematic depiction entered the public consciousness with George A. Romero’s Night of the Living Dead in 1968, but existed as far back as Jacques Tourneur’s 1943, I Walked With a Zombie. Since, zombies have permeated pop culture as stand-ins for whatever metaphor was needed. Tourneur’s zombie was a manifestation of depression, the shuffling zombie masses of Night of the Living Dead were a symbol of encroaching Communism. In Zombieland, it is not the zombies that stand for anything, but what they inadvertently create that is significant. Thanks to the zombie apocalypse, these four survivors are going to enjoy something that eluded them, and was taken from them, during normalcy: genuine human connection. They have one hell of a fight ahead of them, but this slapdash family just might make it.

Zombieland is a giddy delight and the perfect movie to enjoy with your own makeshift family as the summer winds down. But due to the copious — and hilarious — amount of blood and gore, you might want to leave the little ones at home. Instead, bring a blanket, some chairs, a $5 donation and have a grand old time.