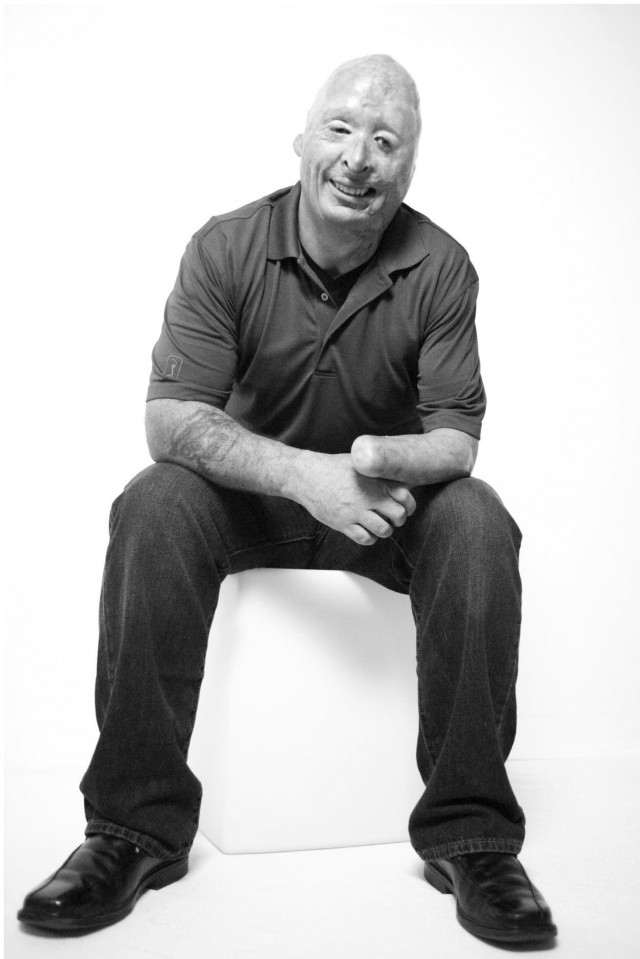 It’s said the formula for comedy is tragedy plus time. But sometimes, when the tragedy is big enough, time moves too slowly and comedy must be found sooner.

In essence, that’s what the documentary Comedy Warriors, which will show at The Dairy Center as part of Veterans Speak, is all about.

The film’s director, John Wager, had been doing film work with the Wounded Warrior Project. Most of it was focused on adaptive sports for injured vets. But on the way home from a shoot in upstate New York, he stopped to have lunch with a friend who worked as a business manager for comedians, and together they cooked up a whopper of an idea: take injured veterans and pair them with professional comedians who would help them craft a standup act about their life and struggle.

“As soon as you can laugh at something, it’s the first step in moving on and feeling better,” says Wager. “And these guys deserve to feel better.”

“They said ‘Yeah, cool,’ probably thinking I would go away,” he says. “We didn’t go away. We kept with it.”

Eventually, the Wounded Warrior Project came on board to help with funding and outreach, and before long, Wager and his partners, Ray Reo and Bernadette Luckett, had dozens of applications in front of them from vets across the country.

They selected five vets with injuries ranging from chronic pain, to amputation, to burn scars, and recruited comedians Bob Saget, Louis Black, B.J. Novak, Zach Galifianakis and others to coach them, filming the entire process.

“We didn’t know if any of it was going to work,” Wager says. “We started doing it and we’re like, ‘We think they’re funny, but will anyone else?’”

In the beginning of Comedy Warriors, the audience meets the five vets, learns about their lives pre- and post-injury, and witnesses how they use humor first to aid their own lives, and later translate it to the standup stage.

And that’s a big part of what they do. “You should see the other guy,” cracks Bobby Henline, who has burns scars across 38 percent of his body.

Like the best comedic routines, Comedy Warriors goes to some of the darkest places in the human psyche, issues of pain, depression, anxiety and potential suicide, and turns those issues on their head, giving the vets meaning and a renewed sense of hope. It is both heartbreaking and hilarious. The film concludes with the participants performing to a packed Hollywood comedy club, despite having only been on stage a handful of times, a situation in which the possibility of bombing, in a less serious sense, is quite real.

Comedy Warriors won grand prizes at all five film festivals it screened at, as well as receiving a special award from The Television Academy for programming with a social conscience.

“They’re so impressive to me,” says Wager. “It makes me think twice about how fortunate we are. I’m not going to complain about stubbing my toe or my Internet speed isn’t fast enough. These guys are going through real stuff.”

But more than just going through it, they’re coming out on top.

As Darisse Smith, one of the comedy warriors, says in the film: “I can now laugh at things that used to make me cry.”