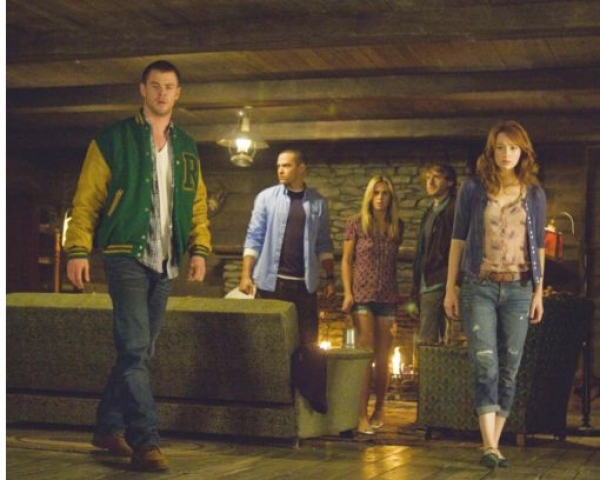 What’s funny is that writer Joss Whedon and writer/director Drew Goddard are going to get praised for how original The Cabin in the Woods is.

It isn’t. In fact, the entire fundamental concept of the film relies solely on existing themes and tropes, on the relentless repurposing of the same mundane series of ideas over and over again. It just gives us an excuse to devour those familiar elements like so much comfort food. And that’s precisely why it is so brilliant. Now, that may sound confusing, but considering how dumbed-down and revealing most movie marketing is these days, it’s kind of great to feel all turned around for once.

Because those who reveal spoilers are only slightly less vile than third-world dictators and people who pronounce the word “wolf ” as “woof,” this review can’t cover the very things that make the film so fun. To talk about it without ruining it is to dance a particularly tricky jig. So let’s get to two-steppin’.

A quintet of clichÃƒÂ©s get into a Winnebago and drive to a place so reminiscent of the Friday the 13th setting, they may as well have called it “Camp Schmistal Shake.” There’s the virginal Dana (Kristen Connolly), the alpha-dog Curt (Chris Hemsworth), the trampy Jules (Anna Hutchinson), the brainy Holden ( Jesse Williams) and the goofy Marty (Fran Kranz). These characters are the permanent residents of movies like this, but for once we are given a gleefully fun reason why that’s always the case.

That reason has to do with Sitterson (Richard Jenkins) and Hadley (Bradley Whitford), two mid-level managers in white shirts and ties, and has to do with the end of all reality as we know it. As the kids are tormented and tortured, the nature of this repetitive song-and-dance becomes clear. The result is a triumph of cleverness that makes this the finest horror film of the last decade. That’s practically an irrefutable fact.

By and large, horror is a tired genre. Worse than that, it’s so frequently lazy. What Whedon and Goddard have done is make that very fact their entire premise. The best part is that the trailers are underselling the scope of it all, concealing the colossally epic third act that is likely to remain among the best of the year.

It may be slight in nature, with a self-referential conceit that isn’t likely to find massive public appeal, least of all from the core horror audiences that made Paranormal Activity 3 a hit. But The Cabin in the Woods is proof that the wheel need not be reinvented so much as repurposed. Essentially, Whedon and Goddard stripped the rubber from that broken down old car, threw a rope in the middle and made us a tire swing to ride on.

Although this isn’t a Sixth Sense experience predicated on holding a reveal until the final moments, the less you know going in to this, the better. So see it now before the true movie villains, those dill-weeds who ruin things on social media, claim another victim.