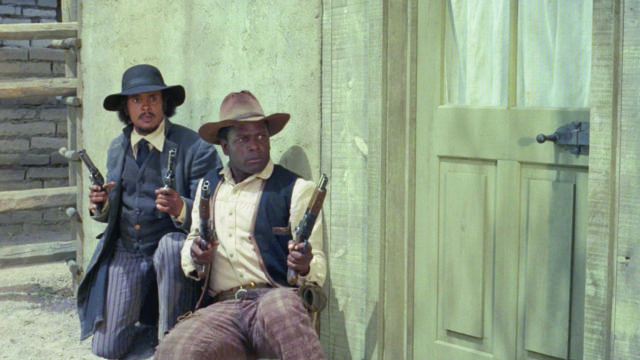 It opens like any other western: Sepia soaked still photographs of settlers in wagons traversing a wild frontier while title cards credit the actors, the filmmakers and the dedication. Then the pictures begin to move. In the background, a lone rider on a horse. There’s always a lone rider on a horse, usually a heroic silent type. But as those dusty sepia images turn to color, the camera moves in closer, a Jew’s harp twanging and a harmonica wailing on the soundtrack. The lone rider is Sidney Poitier, looking about as regal as one can in plaid pants and a pink western shirt.

Westerns are as American as jazz music, and from the inception of motion pictures in the 1890s, they proved to be Hollywood’s most popular genre. There were the popcorn serials popular with all ages, the singing cowboys, the adult westerns of John Ford and the noir-stained post-war westerns. Then, in the 1960s, a spate of revisionist westerns rewrote the old myths that perpetuated and popularized the manifest destiny of America’s westward expansion.

Released in 1972, Buck and the Preacher fits beautifully into the revisionist sub-genre. Ernest Kinoy’s script—from a story by Drake Walker—is a perfect buddy comedy anchored by an acute understanding of how white supremacy drummed out of the plantation took root on the plains. Poitier was one of the biggest stars in Hollywood, and Harry Belafonte, who plays Preacher, was one of the most recognizable artists/activists of the 1960s. The movie should’ve been a hit, but Columbia Pictures failed to give Poitier’s directorial debut a substantial release, and Buck and the Preacher never found its audience.

That should change thanks to Criterion’s 4K digital restoration, available now on Blu-ray.

Poitier plays Buck: a former buffalo soldier turned wagon master helping emancipated slaves navigate Native American territory while staying one step ahead of Deshay’s posse of white bounty hunters tasked with coercing Black settlers back to Louisiana. And if they won’t go by suggestion or force, Deshay (Cameron Mitchell) will just as soon shoot them where they stand.

Not that life beyond the posse is all the better. The elements are harsh, food is scarce and the local tribe remembers what side Buck fought on in the Indian Wars. “Our enemy is a common enemy,” Buck tells the chief (Enrique Lucero) as he pleads for forgiveness and safe passage from Deshay’s gang.

That line should’ve meant a lot, but it fell on deaf ears. Ditto for Ruby Dee’s monologue about raising her babies in a land free from the poison of slavery. Dee plays Ruth, Buck’s love interest if he’d ever settle down, and cohort in the movie’s central heist. Dee’s great, and so is Poitier and Belafonte. But the pair were too mainstream by ‘72—particularly Poitier after films like Guess Who’s Coming to Dinner—to attract the same audience flocking to the newly minted cycle of blaxploitation flicks, and Buck and the Preacher faded into the background.

Talk about a loss. Buck and the Preacher restores Black stories to the western genre—stories previously whitewashed or outright ignored despite the estimation that one in four cowboys of the real west was Black. They could have made a whole franchise out of Buck and the Preacher.

For more, tune into After Image Fridays at 3 p.m., on KGNU: 88.5 FM and online at kgnu.org. Email questions or comments to editorial@boulderweekly.com..