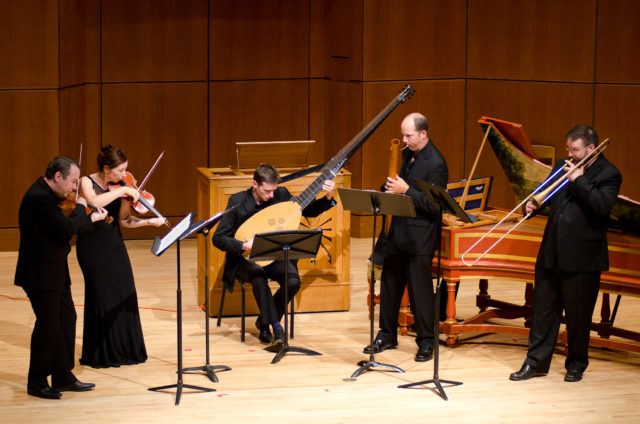 How many pieces of chamber music for two violins, trombone, bassoon and lute can you name?

None? Meet Quicksilver, a Baroque ensemble specializing in the music of the 17th century: They can not only name them, they play them.

Quicksilver brings that combination, plus pieces that call for viola da gamba, harpsichord, organ and lute to Macky Auditorium on Friday, April 20 for the CU Presents Artists Series. Their program, titled “Strange and Wonderful Music of the 17th Century,” includes pieces by composers you have probably never heard of, including Dario Castello, Antonio Bertali, Massimiliano Neri, Johann Schmeltzer, Matthias Weckmann and Johan Rosenmüller.

It says something that the best-known composer on the program is Johann Kaspar Kerll.

Violinist Julie Andrijeski, co-director of Quicksilver with fellow violinist Robert Mealy, relishes the unknown aspect of the 17th-century repertoire. “We love bringing music that people haven’t heard,” she says. “Sometimes we haven’t heard it before we discover it in manuscript or in a library and play though it.

“There are a lot of manuscripts online, and we do a lot of combing of those archives. We love finding things that nobody’s done before, and we’ve found some real gems.”

That is one reason Quicksilver has turned to music of the 17th century — the opportunity to find music that is largely unknown to players and listeners alike. Another is the sense of virtuosity that pervades the music. “There’s so much virtuosity in this music for every instrument in our group — the strings as well as the dulcian, which is an early bassoon, and the trombone,” Andrijeski says. “So it fits us well and we have an affinity for it.”

The Boulder program opens and closes with music by Costello.

“His music is stunning,” Andrijeski says of the Italian composer. “It shows up (in manuscripts) throughout Europe through the 17th century, so his music was known.”

His music was known, but today the composer is not. His birth and death dates are unknown, as are any details about his career. His music was published in Venice, where he worked in the early decades of the 17th century. He may have died in the plague of 1630, since he stopped publishing at that time.

But his music is what interests Andrijeski. “He is the poster child for early 17th-century discovery and invention,” she says. “He is one of the most virtuosic composers out there, and often gives solos for the different instruments, and those solos can be quite elaborate.”

A piece to listen for will be the Sonata for two violins by that “best known” composer, Kerll. “It’s not only beautiful, but it also speaks to the audience,” Andrijeski says. “There are several times when Robert (Mealy) will have a solo, and then I’ll have the same solo.

“I’ll play it in a different style, showing my own personality, interpreting the same notes. This shows what you can say with the music and how free you can be with the interpretation — which is one of the reasons why we love performing this music.”

The individuality of the players is a significant feature of Quicksilver’s performances. “One of the joys of playing with this group is that every musician brings their own experience and their own knowledge, and their own means of expression,” Andrijeski says.

“Every time we come into a performance it’s a discovery for us as well. We might crescendo where we de-crescendoed before, we might slow where we sped up before, we might do this ornament rather than the other ornament. There’s a lot of freedom that is really exciting for us.”

The freedom and the versatility of the individual players has caught the attention of other early music performers. According to The New York Times, Quicksilver is “revered like rock stars within the early music scene.”

But Andrijeski believes the performance style should serve the expression of the music. “One of our main goals is to reach out and touch the emotions of the audience,” she says. “One way to approach (the concert) is to come prepared to be told many musical stories. Maybe there will be a sad section followed by a happy section followed by a frenzied section, and all of these different (emotions) and colors affect the listeners and make them feel differently as we play through our music.

“So I wish that the audience comes with an excitement to be filled with wonder.”