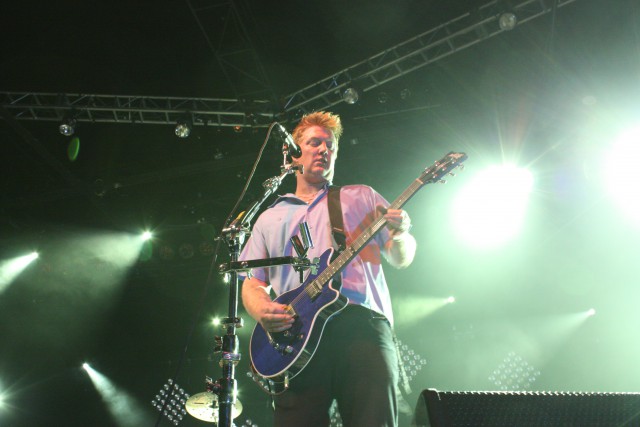 Before I start describing Monday’s Them Crooked Vultures show, I think a little discussion of the group itself is in order. After all, some people (an unfortunate few) may not yet have had the privilege of hearing the self-titled disc from three of the most influential rockers of their respective decades. Their loss.

The band contains Led Zeppelin bassist John Paul Jones, Nirvana drummer/Foo Fighters front-man Dave Grohl, and Queens of the Stone Age (QOTSA) singer/guitarist Josh Homme. Grohl, story goes, was the guy who set it all up. Grohl and Homme toured and recorded an album with Queens of the Stone Age (2002’s Songs for the Deaf), and Grohl knew Jones through a brief collaboration the two did for a Foo Fighters album. He wanted to get Homme and Jones together, so he seated the two next to each other during his 40th birthday party at Medieval Times. Over a royal feast and jousting, Jones and Homme hit it off, and the rest is history.

The trio, plus underrated Queens of the Stone Age guitarist Alain Johannes, recorded an album, which came out last fall. While most coverage of the group focused on Grohl and Jones, the two most recognizable members of the group, the musical product more resembles Homme’s brand of music. Homme croons about sex and drugs with his expected swagger while delivering crunchy, tightly written guitar riffs laced with his signature bass-heavy tone. Most critics sadly overlook his songwriting with QOTSA, and his command of Them Crooked Vultures’ sound is part of the reason why the group succeeds where so many other super-groups fail. Grohl is an animal on the drum set. While most drummers merely stay adequately on the beat, Grohl viciously attacks it. Hearing him pound relentlessly on the kit is refreshing: Oh yeah, you remember, this is where he belongs. Jones holds down the bass, contributing some vintage Zeppelin-style accompaniments with the vigor of a man half his age. The opening track, “No One Loves Me & Neither Do I,” sounds like a potential cut from the next QOTSA album, reeking of Homme’s production and tight songwriting, while songs like “Elephants” and “Dead End Friends” are energetic rockers that sound like the sum of the parts: part riffy Zeppelin, part Nirvana punch, part smutty QOTSA precision.

In fact, the entire album sounds like one giant shit-eating grin. Grohl and Homme play like they’re thrilled to be making music with one of their idols in Jones; Nirvana, Foo Fighters and Queens of the Stone Age all owe much to Led Zeppelin. Jones, for his part, seems content to be in a successful rock band again. Though, musically, he sometimes gets overshadowed by Grohl and Homme’s pyrotechnics, Jones’ well-placed bass lines give the band a solid foundation to build upon, and the band wouldn’t be the same without him.

The trio took the stage before a sold-out crowd at the Fillmore Auditorium in Denver on Monday. I feel honored to have been in attendance, because the power of their performance was unlike anything I’ve ever seen. They started out with the aforementioned “Elephants” and played for about another hour and a half.

It certainly wasn’t a mistake-free show. Grohl, given the madness he was creating on drums, understandably flubbed some backup vocals, and the band didn’t quite nail all the complicated rhythmic fluctuations during the breakdown in “No One Loves Me” — but that didn’t stop the crowd from hanging onto every note. There was a point during the concert where Grohl was playing some wickedly fast fills through some hits played by the band, and the crowd erupted into raucous cheers — a reaction I’ve never seen inspired by a drummer. When the band took a break and Jones took to the piano halfway through the set — he is a magnificent musician — the audience again went nuts. When I was waiting for the band to start from the photo pit, the front row started chanting “John! Paul! Jones!” and “Dave! Dave! Dave!” at the same time.

“Denver, you’re awesome,” Homme said at one point early in the set. “And those of you that know me know that I don’t just say that to everyone, like I’m Ozzie fucking Osbourne or something.”

Homme played guitar heroically. On “Reptiles,” he effortlessly navigated complicated rhythms while not breaking a sweat vocally. His stamina was impressive: his hands were moving at blurring speeds throughout the show but his playing never affected his voice. Fans know he can be kind of a dick on stage — and on Monday he had no hesitation pointing to some guy in front and mercilessly emasculating him in front on the entire crowd — but he did deliver some great lines, saying, “This is what we do at the Them Crooked Vultures corporation. We give you a night you’ll never remember.”

The show ended far too soon, thanks to a curfew enforced by one of the members of the band. Homme refused to take credit though.

“We have to go,” he said before the last song, and the audience let out a disapproving roar.

“Hey, don’t blame me. It’s not my fault,” he said, glancing towards the 64-year-old Jones, who’s almost twice his age.

Get a copy of the Them Crooked Vultures album if you haven’t already. It’s worth every penny to hear rock history in the making. I hope, for the benefit of the country and rock ’n’ roll, they make another album, and soon. Until then, we’ll have to content ourselves endlessly listening to and dissecting the monster album they’ve already made. But for some reason, that doesn’t bother me.