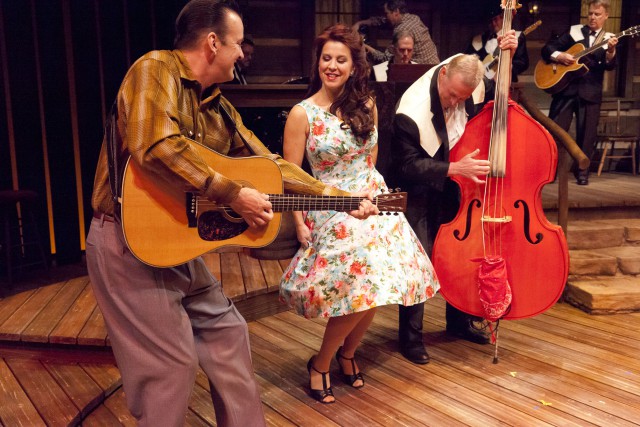 Though they were incredibly gifted performers whose music still resonates and whose influences remain readily apparent today, you don’t see bumper stickers reading, “God Bless Janis Joplin.” Or Jimi Hendrix. Or Frank Sinatra. Or Dean Martin. The only such bumper sticker you ever see is, “God Bless Johnny Cash,” and you don’t just see it on beat-up, old pickup trucks. You also see it on BMWs, Nissans and the occasional Prius. And there’s a goddamned good reason for that.

Johnny Cash transcended music, and even fame, to become a true icon of modern American history. Born dirt-poor during the Great Depression (the first one, not the second one on whose edge we now teeter), Johnny Cash came from nothing and wound up with everything. In this way, he typified the American Dream. Unlike most of today’s famous musicians, he came across as a real person, warts and all, rather than a focus-grouped, marketing-approved, sanitized product. As an old-timer might say, they just don’t make ’em like that anymore.

Cash’s music, like the legend of the man himself, lives on with as much vibrancy today as when it was first produced. The opening notes of “Folsom Prison Blues” are unmistakable. Most men — and some women — reflexively sing along every time the titular line in “Daddy Sang Bass” comes around. A significant portion of the population only knows the stories of John Henry and Ira Hayes because of J.C.’s songs. And everyone still hoots and hollers when that angry boy named Sue finally confronts his mean old dad with the timeless greeting, “My name is Sue. How do you do? Now you gonna die!”

After Cash passed away in 2003, it was only a matter of time before someone created a stage show tribute to the Man in Black. That someone turned out to be Bill Meade, who obtained the stage rights to most of the core Cash songs just before Johnny died. How, though, does one honor and celebrate the life of a man like Johnny Cash without crossing the line into the maudlin or melodramatic? How does one perform his songs without Cash’s own signature voice? The task must have been daunting, but Meade and Richard Maltby, Jr. were up to it. The fruit of their labor is Ring of Fire — The Music of Johnny Cash.

Lisenby, Brent Moyer, John Marshall, Walter Hartman and John Foley play all the instruments, sing all the songs, tell all the stories and muddle through the minimal choreography like champs. They spend the majority of the show on or around the front porch of an old farmhouse styled after the one in which Cash grew up.

Burgess, who plays the younger incarnation of J.C., emulates without aping, and his rendition of “A Boy Named Sue” brought down the house. As the older Cash, Edwards brings the necessary gravitas to Johnny’s later life.

Though they don’t perform the song in its entirety, strains of the Cash version of Nine Inch Nails’ “Hurt” are heard throughout the show, and those notes, combined with the image of Edwards in Cash’s signature black coat, will send shivers down your spine.

Provart and Barnes play all of the women in Cash’s life. Both are talented, but Provart bowled me over more than once with her power and range. I would not be at all surprised to see her on stage or on TV again in the near future. In addition to these principal players, I got a huge kick out of Kearns’ ace comic timing, and Marshall worked miracles on the upright bass.

If you don’t know much about Johnny Cash, Ring of Fire — as much or more than the 2005 biopic Walk the Line — will serve as an excellent introduction to this singular man. If you’re already a fan, Ring of Fire will be a night you won’t soon forget.