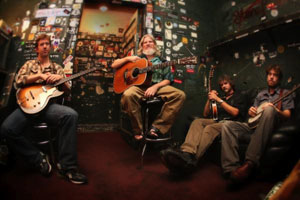 Billy Nershi was on the road when we caught up with him last week, winding his way through the fall colors of eastern Pennsylvania. Fall’s nice back East, but Nershi was hoping to catch a little autumn blaze in the high country back home.

“It’s getting really nice here. It got cold last night, and it’s really changing. But I hope there’s still some color left when I get back there,” Nershi says.

Festival season has wound up now for guitarist Nershi and his bandmate Drew Emmitt, and it’s back to the ground game, hitting smaller clubs and venues in support of their recently released CD New Country Blues. Steeped in blue- and newgrass stylings, the CD represents the culmination of a couple of years of collaboration between the two pickers, a lot of road miles as the Emmitt-Nershi Band, and a few decades worth of Front Range jamgrass trailblazing he as guitarist and founding member of String Cheese Incident, Emmitt as one-third founding agent and all-nine-inning mandolinist for Leftover Salmon.

That the two would find themselves gigging and recording together in a more rigorously roots-oriented outfit speaks to both their mutual artistic admiration, their continuing dedication to acoustic string music (traditional and otherwise), and the remarkable binding influence of the Colorado music ethos, something both players and their former bands participated vigorously in establishing.

The two found a nice place up in the high country (where else?) to hole up for a few days and record the CD.

“I don’t know if it was in a hurry, but we wrote it in a short amount of time. We stayed at a friend’s house up in Estes Park for a long weekend and wrote the bulk of the material for the disc there. We had a couple of bits and pieces, a verse here and a chord change there, but we really basically wrote seven songs up there,” Nershi says. “I guess we just felt a lot of confidence in each other’s songwriting skills that we weren’t too worried about it.”

Collaborative songwriting can be an exercise in either finding common ground or finding a way to swing the joint effort well outside of both agents’ comfort zones. Nershi says the two tended toward the former.

“In the past, I’d only really collaborated on about four songs; a lot of the time I write solo. We weren’t sure exactly what would happen, but I think we brought out the best in each other, and we were both willing to really run with ideas We would take somebody’s ideas and just say, ‘OK, what if we do this and add this, or add this chorus,’ or we’d sit down and say, ‘What’s missing is a fast song. What do you think of these chord changes?’ speaking

specifically of New Country Blues, the song, and then, ‘OK, how about this chord change?’ Drew would write a verse, and I’d write a verse There was just a lot of really good momentum during that session,” Nershi says. “I think we tended to go toward the common ground and toward progressions that kind of had a familiar feel to both of us.”

And familiar to them is familiar to a lot of other people, as well. Both Leftover and String Cheese evolved from local club acts into festival and solo stage heroes in their day, finding and expanding trails in the ’90s and ’00s first hacked open by Newgrass Revival a decade earlier, bending folk and bluegrass aesthetics into experimental forays of jam rock and endearingly offbeat hayseed pop. While both bands kicked out the full-time touring/recording plug (Leftover on New Year’s 2005 and String Cheese in 2007), they remain corporeal enterprises, not over and not ended At least in the case of Leftover, the band is resurrected among their various members’ schedules, usually for holiday gigs, as if no one really has the heart to say goodbye forever.

But Nershi’s enjoying his post-SCI life. “The thing that’s cool about what we’re doing now is that it’s much more about the music and less time is spent on the business end of things. I mean, the business end of our thing is really pretty simple right now. I think for both of us to get back to focusing on just playing music, that’s what we wanna do. Less distraction and more time onstage,” Nershi says.

But Nershi also says that getting String Cheese back together for the Rothbury Festival in July went pretty well, at least for a band that hadn’t been on ice very long.

“Yeah, I thought it went great. I was really encouraged by how well the show went, how it was musically, and how it went spending time with everybody,” Nershi says. “For me, it was just a matter of really needing to take a break from all of it, after 14 years. And for that, I feel more rejuvenated in the String Cheese world. And it’s given me the time to pursue things that I really was into, like playing with Drew in this band and diving into playing bluegrass with a lot of real great pickers.”

Diving back into bluegrass, the real thing, was something Nershi says he was ready for.

“Oh, yeah, I was just waiting for the opportunity.

Drew and I had gotten together at a few different gigs over the years like the Mark Vann Foundation gig at the Boulder Theater. That was one of the gigs where, after it was over, we just looked at each other and said, ‘Ah, this is something we should be following up on whenever we have the chance,'” Nershi says. “And this is our chance.”

The Emmitt-Nershi Band plays the Boulder Theater on Oct. 17.