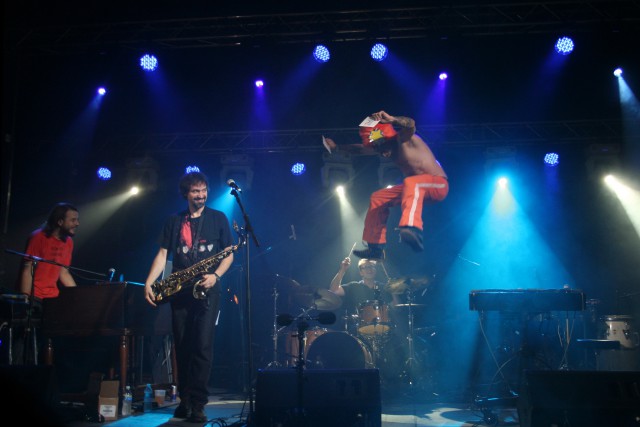 If you’ve been waiting to see jazz/ funk/rock group Garage A Trois in concert, you’ll have to forgive the quartet for being so busy. After all, each member is spinning multiple plates, which is why they’re so popular in the first place. Yet Skerik wouldn’t have it any other way.

Skerik is the saxophonist who comprises one quarter of the group that also features Marco Benevento, Stanton Moore and Mike Dillon. If those names seem familiar, that’s because they are — with each member representing a diverse, dynamic body of work.

“Variety is the spice of life,” Skerik says, “but it can be kind of a curse as well.

But I don’t think I could get everything I want out of just one band. I’ve always had a bunch of things going at once, so I’ve never tried it any other way. But it just makes sense this way musically. If you love different types of music, then why limit yourself to one kind?” For example, Skerik says he’s currently putting together a new band with members of Martin, Medeski and Wood, and he mentions three other bands besides Garage A Trois that he’s involved with. Simply put, Skerik’s a player in demand on a number of levels. Certainly the rest of the band could say the same.

Moore is the drummer for Galactic and is busy with a new record there.

Benevento stays busy with his solo work or the Benevento Russo Duo, while Dillon’s usually busy touring with Les Claypool, Ani DiFranco or Galactic. To say that Garage A Trois is an accomplished group would be an understatement.

Yet when the four finally carve out the time to write some new songs, Skerik says that music flows freely. Their new album Always Be Happy, But Stay Evil came out last spring and represents a body of work that Skerik describes as greater than what any of the band could do individually.

“As a group, when we get together and write, we’re all definitely on the same page and trying to make a real collection of songs. You definitely know which ideas are going to work when you’re presenting them to the band and we start shaping them together. That’s the cool thing about being in a band, as opposed to working on your own, is that you have this collective, and the sum of the parts can be greater than the individual. You really have an opportunity for any idea you have to be fleshed out and be better than when it started.”

Part of the chemistry of Garage A Trois comes from their common view point as artists making music. Skerik is careful to describe the band “not as a group of musicians making music, but artists using music as a tool.” He then laughs and admits, “You can probably tell I’ve been reading Brian Eno interviews lately.”

When pressed for an example, Skerik mentions the alt-folk of Fleet Foxes as a group of artists making a meaningful stamp on the music scene. He’s excited about the future of music and where it’s going based on the output of groups like Fleet Foxes and the accessibility to great music today.

“I was watching Fleet Foxes videos last night and this one song was very modal in how the vocals were going over the bass line and guitar, but it was so powerful how he was shaping it,” Skeric says. “It totally reminded me of John Coltrane. It’s basically the same thing, even if they don’t realize that. But I started looking for this Coltrane song to send to them. That’s an example of how a band can be fun in that way — to put their own stamp out there and develop those things.”