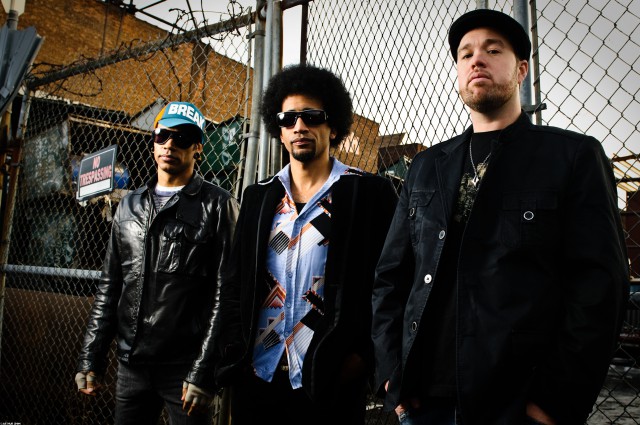 Eric Krasno doesn’t know what’s going to happen this weekend. Neither do you. And to hear the Soulive guitarist explain it, that’s what makes Snowlive a must-see event this weekend at the Fox Theatre.

Krasno is one-third of Soulive, the fantastic jazz/funk trio from Buffalo, N.Y., that’s among the best in the biz. They’ve played with Dave Matthews, the Rolling Stones, the Roots, Stevie Wonder, Common, John Mayer and a multitude of others. (Interestingly enough, the drummer for Krasno’s other band, Lettuce, now plays with Pretty Lights.) Regular guests at their live events include Talib Kweli and Derek Trucks. In short, they’re rather well connected.

Those connections come from an excellence in their craft. Since 1999, the trio has carved out a soulful niche that makes both the studio and live experiences compelling. Maintaining an organic approach allows Krasno to still be surprised after all of these years.

“The great thing about it is that I don’t really know what to expect,” Krasno says. “It’s pretty spontaneous, and we never know what’s going to occur. We like to do some planning, but we also leave things open for improvisation and cool things to happen. It’s exciting for us, which in turn I think makes it exciting for the audience. We’re all watching it unfold the same way they are.”

Part of the magic comes from blending varied elements together into the same mix to see what greater flavor emerges.

“In one night, you’ll have Talib Kweli come on stage and rap and then 20 minutes later, Derek Trucks and Susan Tedeschi came on stage,” he says. “It’s really eclectic musically, but it somehow makes sense. If you saw those names on a bill together, you might not get it. But when it’s all part of this big mix, it’s all really soulful and it works. It all flows really well.”

Snowlive comes to Boulder this weekend, and it’s a version of the same event they’ve held at the Brooklyn Bowl called “Bowlive” the last three years. Since they love the eclectic mix of the shows, the goal is to bring them to new places. Lake Tahoe is also getting a version of the event later this year.

Even though the band is a well known act and a well-oiled machine when it comes to stage chemistry and experience, Krasno says he continues to grow as a live musician. In fact, practicing for the upcoming Boulder shows helped him sharpen his skills.

“I learn every single day,” says Krasno. “Today I was listening back to some live stuff from a couple years ago, because I was sending out music to horn players who will actually be with us in Boulder. I was listening and I was suddenly embarrassed. ‘Oh, I’m playing way too many notes there. Oh, I’m too excited here. My tone there is wrong.’ I’m always nitpicking myself. I rarely ever listen to it, but when I do, it sets me on a path to better myself.”

The members of Soulive — which include brothers Alan and Neal Evans on drums and keys/organ respectively— are also busy with their own label, Royal Family Records.

While it’s mostly a home for Soulive projects, they’re also slowly getting into artist development — a passion that Krasno says is quickly becoming his primary interest.

“There’s so much great talent being overlooked,” he says. “A lot of the major labels that still exist are only signing a certain type of artist. It’s generally pop, and a lot of it is based on image. We just want to make great, soulful music, and I think a lot of artists and bands don’t have the ability to get their music out there. We not only offer the recordings experience, but we’ve been touring so long that we can help with that as well. Festivals and events that we play can help give others that chance.”