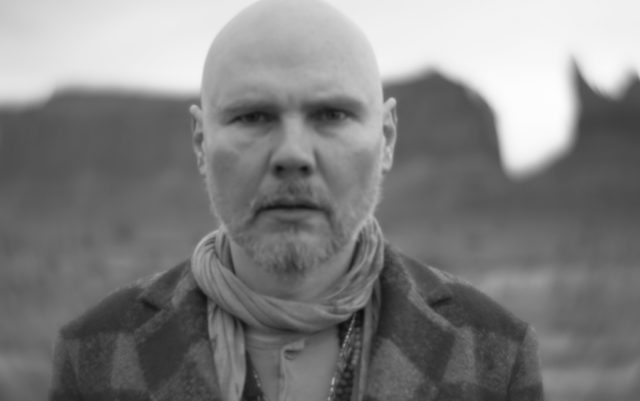 Less than two minutes into our conversation, Billy Corgan asks me to hang on. I hear a muffled and brief interaction he’s having with a police officer: something about a one-way street and turning around.

“I came out of my driveway and made a turn to go to my teahouse and now I’m in trouble with the police,” Corgan says. Well, “trouble” may be overstated since he’s now on his way and our conversation about his latest solo album, Ogilala, can resume.

Backed by acoustic guitar strokes and simple piano notes — sometimes accompanied by strings, sometimes not — Corgan’s idiosyncratic voice is the focal point of the stripped down album. It’s quintessential Corgan, although the scratchy, nasal reaches of the iconic ’90s alt-rock voice are more refined. And perhaps the musician is as well, choosing to release Ogilala under his full name, William Patrick Corgan, and giving up the shortened name of his youth, and arguably, The Smashing Pumpkins’ fame.

“I’m 50 years old,” he says. “I think William seems a little bit more appropriate than Billy at this point in my life.”

But the name change (if you can even call it that) has caused quite the stir in music circles, drawing lots of questions and maybe even a few eye-rolls.

The singer is no stranger to controversy. The known contrarian has made headlines with his public squabbles with former bandmates, girlfriends and media outlets; his appearance, more than once, on known conspiracy theorist Alex Jones’ Infowars; and a recent appearance on The Howard Stern Show, where he shared an experience he had with what he calls a human shapeshifter, albeit in vague terms. But, he’s supposedly past all of that now, calling it all a part of his “artistic, whatever, insanity,” merely a “creation in my own mind.” He’s come full circle he says, back to the place where he can sit in a room with a guitar and care enough to “actually try to make something with it.”

Early in his career, Corgan displayed an uncanny ability to internalize the external world through his music, writing songs that captured the inner turmoil and shared angst of the late 20th century American experience.

“When it’s done well, there’s a beautiful balance between that internal and external dialogue,” Corgan says. “And where I miss, and I miss a lot, is because the balance is off.”

With Ogilala he seems to have found the balance again. The songs are both reflective and poignant, but this time around the social commentary is more nuanced, rooted in his experience as a father and small business owner in the Highland Park suburb of Chicago rather than American culture as a whole.

“When you’re a local business owner, and you’re connecting with the community on their terms, not yours, it wires you back into the way people’s life rhythms work,” Corgan says. “Knowing the people in my community, talking to them about their life and experiences, it takes me back to the world I grew up in.”

His childhood in the late ’60s and early ’70s straddled the “idealized Eisenhower” world of the ’50s with the emerging “Nickelodeon times” of the ’80s. It’s an intricate mythos that even Corgan doesn’t seem to fully understand.

In many ways, the same could be said about The Smashing Pumpkins: The myth of the band from the 1990s drives people to want more from the group, but the reality of its four members has been messy for decades.

“The myth is more powerful than the reality,” Corgan says. “Go watch a clip of us playing from 1994; we’re pretty ragtag. You know, we’re good, but we’re not perfect. But in people’s minds the idea of those four people on a stage, that’s a shining light.”

The last time all of the original members played together was in 1999, shortly before the band dissolved in 2000. A reunion tour in 2007 with drummer Jimmy Chamberlin, but without guitarist James Iha and bassist D’arcy Wretzky, drew criticism from even the most ardent fans.

“I was suddenly in a band that I had never been in before,” Corgan says. “My band had been taken away from me and I was the custodian of The Smashing Pumpkins museum, which I didn’t even have say over what statues went where.”

Corgan’s current tour features one set from the new album and a second covering work from his entire career, including some The Smashing Pumpkins songs he hasn’t played live this century. What happens next remains to be seen, but the singer isn’t ruling out a full reunion of the band just yet. He seems almost hopeful it will happen soon.

But maybe that’s just the power of the myth, which for America, and perhaps even for Corgan himself, is rooted in the possibility to transform.