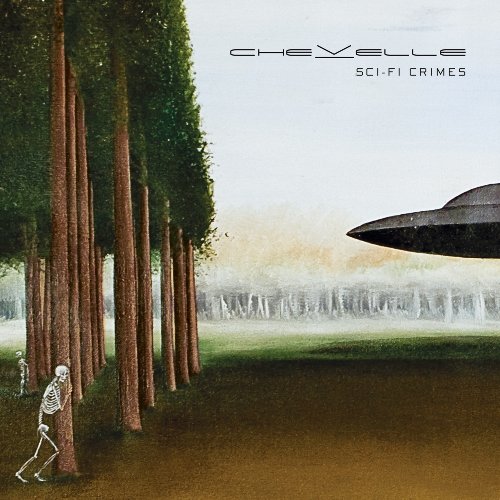 What do unidentified flying objects, aliens and hard-rock
songs have in common?

“Sci-Fi Crimes,” the crunchy, rocking new Chevelle
disc, sports a crafty cover painting of skeletons, trees and a flying saucer as
well as songs with titles such as “Highland’s Apparition” and
“Roswell’s Spell.”

That interplanetary mood began with music, of course.

“We were working on the title of the record and we have
a song called ‘Roswell’s Spell’ about us going to New Mexico years ago,”
says the 34-year-old Loeffler by phone from his home in Chicago. “And this
friend we have was diligent about keeping us going on and on about alien
watching.”

Cut to that album artwork, which was painted by the band’s
bassist, Dean Bernardini.

“It was all random stuff. Dean was doing this painting.
He asked, ‘Could it work for a cover?’ We loved it,” Loeffler says.
“It all came together that way. It’s a tongue-in-cheek subject. Aliens,
spacecraft from the ’50s and zombie creatures.”

“Sci-Fi Crimes” is Chevelle’s fifth studio album
and its second with new bassist Bernardini, who replaced Joe Loeffler in 2005.
Now that Bernardini’s recording debut with the band, 2007’s “Vena
Sera,” is part of history, the band’s remaining Loeffler brothers, Sam and
Pete, have officially jelled with brother-in-law Bernardini.

“Sure. Oh yeah,” he says. “Dean’s a drummer,
too, so we always work on things together. It wasn’t a big surprise to work
with him on drum parts, on the rhythm section. It was all very natural. We do
all that stuff together, which is great.”

And does Sam Loeffler think Chevelle sounds better now with
Bernardini on bass as opposed to brother Joe?

“It sounds better in the sense that we sound more
complete. Between working with Dean and developing our goal to write songs, I
think it’s a better band for sure.”

It’s certainly a more stable band. Sam and Pete Loeffler
have bickered back and forth with brother Joe about whether he was fired from
the band or quit. Joe has claimed the former, while Sam says it’s the latter.

“He quit four times,” says Sam Loeffler.
“Every time he quit, we would go back to him and say, ‘Please don’t quit.’
He’s a very, very difficult man. We all have somebody like that in our lives,
and he’s that person for us. We always had a difficult relationship.”

To say the least, Sam Loeffler is now estranged from his
brother Joe.

“I don’t miss playing with him,” he says. “He
never really liked being a part of what we did. He didn’t enjoy touring and
didn’t like working on songs. We didn’t write together. That wasn’t his thing.
I’m not surprised at all that he didn’t want to do that much. I don’t really
miss any of that.”