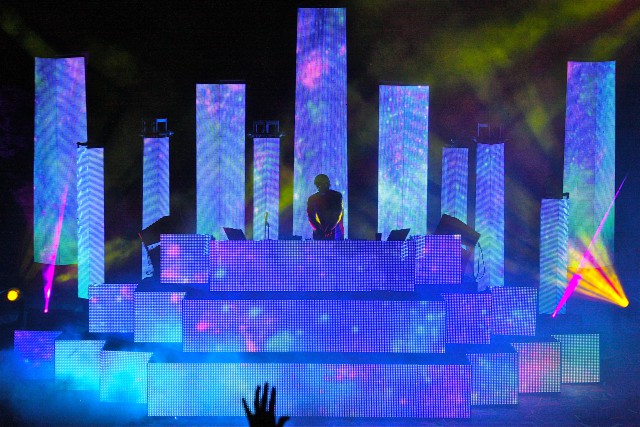 There’s absolutely no way I can write this review without bias. No one altered my college music sensibilities like Pretty Lights, whom I knew as the spearhead for Colorado’s charge into electronic music and indisputable winner of the hearts and ears of a generation of CU students. Just when the electro scene began a convergence into a straight, gritty line, seemingly out of nowhere came this sound that redefined my expectations of electronic style.

So it felt like nothing short of magic when I saw my very first Pretty Lights show at Red Rocks back in 2008. That first BOOOOM-BMMMM hit from “Hot Like Sauce” and the bass seemed to shake moisture straight out of the sky. The song still makes me shiver to this day: I will never hear it without thinking of drizzling rain. By the time it blended into the more frantic “Finally Moving” the drizzle became a downpour, and dancing wasn’t a recreation but a necessity to stay alive under the frigid sheets of rain. In many ways, it felt like a really cold baptism.

And with this precedent I felt like a pilgrim coming back to Red Rocks as Derek Smith made a return to his Colorado home. He’s grown his music and his label into an insatiable monster that terrorized the festival circuit, but it can’t be overlooked that packing the Rocks again is a strong statement for Pretty Lights Music (PLM), Smith’s label.

This year felt more like a showcase for PLM than ever before, even though openers and label mates Gramatik and Michal Menert have been tied to Pretty Lights since the very beginning. Gramatik’s Denis Jasarvic was one of Smith’s top choices for PLM before the label materialized, and the stylistic link is immediately clear. Where dubstep has trended a lot of electronic music to be as abrasive and forceful as possible, what I heard throughout the night was a realization that crowds need a little room to breathe. Gramatik set that exact tone, and despite having his set split into two parts (before and after Big K.R.I.T.’s straight hip-hop blast-off), Jasarvic lept back onto the stage in full stride to debut a new track and throw some live guitar into the mix. A great opener that could have succeeded in a later slot, Gramatik kept the energy level afloat with that PLM blend of laid-back soul and visceral, electric charge.

They really nailed it with a quick-paced electro track, and suddenly it was over, again. Dubstep DJ Skream then wasted no time in taking all of the night’s built up chill vibes and confidently steamrolling over them. The crowd didn’t object to the shift; they nearly encouraged it and even stuck with the DJ after backspins and a comment like, “Fuck it… I need a better reaction than that!” What seemed to me like a traitor in the midst of the chillectro ranks, Skream impressed the crowd with favorites from 16bit and Skrillex and plenty of original tracks that filled the middle of the set, earning a massive sea of bobbing hands.

Michal Menert then had the rough job of following up on Skream’s nasty dubstep set with a return back to a mindful groove. Essentially a founding member of Pretty Lights, he’s right on par with Derek Smith in terms of production skills and co-produced Pretty Lights’ debut, Taking Up Your Precious Time. He’s a great showman as well, something you absolutely can’t lack when a laptop is your instrument. Menert kept his energy up throughout the set even as Skream fans lagged and wished for more. If anything was lacking from Menert’s set, it was appropriate context, but it certainly wasn’t effort.

When it was time for Pretty Lights, it was obvious these were going to be less “pretty” lights and more “holy shit” lights. While Smith warmed up his rig, the giant 3-D installation lit up to form a city skyline, and sans precipitation, “Hot Like Sauce” thundered out as the crowd thundered back. This was a fan-heavy crowd who was looking for deep catalog satisfaction, and Smith was eager to deliver. Each new track received some variation of “Yeah!” and the crowd was hooked, no matter the tempo.

Maybe that was because Pretty Lights’ set seemed to tie the night together. While Gramatik delivered on live performance, Big K.R.I.T. on boom and bounce, Skream on power bass and Menert on mellow reflection, Smith took each and smeared it all across a two-hour power ride. I take a little personal pride for totally calling it on Smith’s “secret throwback”: the sublime “Samso” taken from his first record. After riding through the different shades of Pretty Lights’ faster tracks, “Samso” was like a soft blue glow that let the crowd put down its guard as Smith stretched the song into an extended remix. It was the perfect time to head to the top of the venue and take in the stage, the city skyline and an occasional falling star.

One of the more understated parts of Smith’s shows is the trademark ease of his stage presence. It’s never frantic or overwrought, just delivered with a casual, effortless sway and bounce as he keeps his hands on the trigger of each sample.

There’s no doubt he outpaced the crowd, who wearily but happily kept up their enthusiasm into the night. They definitely had the energy to show love for “I Know The Truth,” Smith’s most dubstep-y tune to date that was unveiled at Bonnaroo this year to much acclaim. And just when I thought I couldn’t go any more blind, Smith brought out the finale with his “All of the Lights” remix, and as Rihanna sings, turned it up “extra bright, I want y’all to see this.” The laser cannons went from stun to kill and catharsis was at full blast, filling every inch of the fogged-out venue with light. Though some had the energy to shake out their last bit of strength, most of the audience took the time to just stand back and watch in awe.

What surprises remained hidden? What questions were left unanswered? The new generation of Pretty Lights fans shuffled out looking like they didn’t dare find out. Maybe next year, undoubtedly at the same time and place. Welcome home, Pretty Lights.