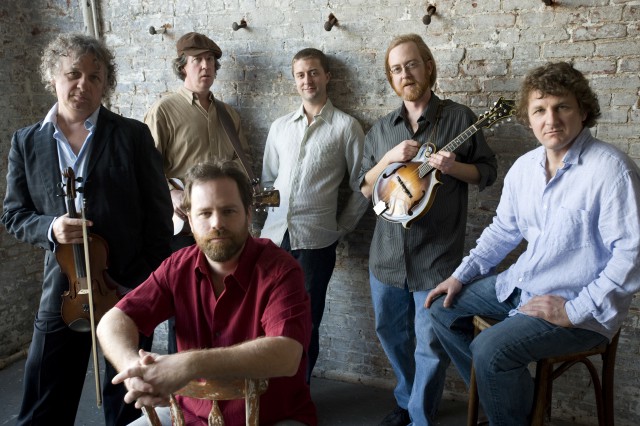 “Well, I’m not having the best of Sundays,” admitted Railroad Earth violinist/vocalist Tim Carbone when we caught up to him on Nov. 8. “My Giants just got beat 21-20 by the Chargers.”

Ouch. Fourth loss in a row, and at the hands of that brat Philip Rivers. Darkness descends over the Tri-State area, and there’s not much joy either in the Broncos’ rickety perch atop the AFC West, here on the Front Range.

Other than that, though, life’s OK for Carbone. Railroad Earth, the Americana quintet he co-founded almost a decade ago with fellow Jersey-ite Todd Sheaffer, is in a good place these days, having recently wrapped up a robust festival season with an opening gig for the Allmans at Red Rocks, and now awaits a few multi-night stand gigs, including a three-nighter at the Fox this weekend. A little more playing for a little less traveling, plus better odds that the hard-cores come out.

“We’ve been touring and basically doing other things. Todd really prefers to write when he’s home; he doesn’t really write on the road. So, we’ve been doing a lot of road work … and it looks pretty positive that sometime in early 2010 we’ll be going back into the studio for a record that we hope to have released by … well, I doubt it’ll be out for festival season, but hopefully by the fall of next year.”

Unlike a lot of their contemporaries, though, Railroad Earth keeps new material pretty well under wraps until after it comes out pressed to disc, rather than road-testing, audience-reaction focus-grouping it.

Not that either way is better, but it’s kinda old school and a little reassuring. Get it right first, then play it out.

We reacquainted ourselves with the band’s online footprint, especially some of the forum sites that have grown up around the band’s fan community. A lot of chatter about YouTubes and taped concerts — whose had better sound quality, etc., etc. — and we’re thinking, y’know, here’s a band that makes its living playing shows, and when the time is right goes into the studio and makes a record, but the real action out there, a lot of the time, is in the free stuff.

No, we weren’t born last night, of course; taping and the underground trade, for cash or not, has been with us for years, pre-dating the Internet. But the ease with which people can record shows these days, both audio and video, means that there’s lots more stuff out there. Guys like Carbone have little control over what is available under the band name he and his bandmates struggled 10 years to establish.

Carbone seems a little diffident about this.

“Well, we allow audience taping … so that can be sketchy and dicey. The bottom line is that the audience tapes tend to be … mostly OK, not that bad. And we record every show ourselves, anyway.

“But … to me, I don’t really care. If people want to listen to crappy recordings, what am I going to do?

“I view our live shows as something that I put out and it goes out into the ether, and when it’s done, it’s done. I move on to the next. I’m not interested … well, I’ll listen to live recordings of newer stuff that we’re doing, just to make sure I’m on track with my playing, that kind of stuff.

“I do a lot of outside producing, and even when I make a record, after it’s done I’ll rarely go back and listen to it. When it’s done, it’s done. Move on.”

And so in an age of fast and abundant media, maybe that’s the way you grow your history.

Never standing still long enough to actually look at it and admire it.

And maybe finding a way to thrive between the cracks — like Railroad Earth, drifting elegantly between genres, teasing the bluegrass crowd with fiddle or mando jigs, coaxing the rock crowd with some grindy blues, sidling up to the folkies with acoustic ballads and string-band attention to detail.

Grey Fox, upstate New York, 2002: “We were going through a little rehearsal thing up at a friend’s campsite during the day, and our drummer was walking up the hill with his snare drum, in a snare case. I mean, pretty obviously a drum case. Some old timer stopped him and said ‘Whoa brother, you musta’ taken a wrong turn.’ Without missing a beat, our drummer says, ‘Well, no, this here is a collapsible banjo.’ “The old timer looked at him and said, ‘Well … OK then,’ and walked off.”