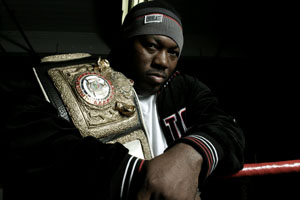 Rahzel’s next move makes a lot of sense.

He is the world’s preeminent beatboxer, but that’s a post that accords only so much eminence. In the 10 years since he used his former crew, The Roots, as a springboard to go solo with his rapping, beatboxing and virtuoso sound effects, he has released one studio album. His label, MCA, no longer exists, and a label was too much pressure anyway, he says.

But he thinks he might have a good idea: children’s entertainment. He has kids. He likes kids. He has guested on Nick Jr.’s breakout hit Yo Gabba Gabba! He has worked on video games. Now, he’s pitching a kids’ show. He wants to start “feedin’ ’em some good hip hop.” This makes sense. Adult themes have never been his milieu, and what better audience for an experienced MC who can realistically imitate a hydraulic drill and talk like a robot?

“I can’t do the ‘Stanky Leg,’ so I gotta figure out a different way to adapt,” Rahzel says.

You can catch an exhibition by the greatest living beatboxer Oct. 15 at the Fox Theatre with DJ JS-1 and Backpack Symphony. Rahzel’s show will be short on hits, but his live shows are long on other things: crazyass sound effects.

You surely have one friend who can beatbox a spitty 4-4 rhythm of bass hits and snare taps. This beatboxing is only distantly related to what Rahzel does with his mouth. He can weave a complete musical track of syncopated drums, synth notes and Casio-type sound effects. He can sing while he beatboxes. He makes convincing auto shop noises and computer bleeps, and he can credibly imitate the sound of a tape being played backward. He does a stunningly accurate version of RZA’s instrumentals to “Wu-Tang Clan Ain’t Nothing to Fuck Wit’.”

Before The Roots were a national institution, they were a moderately popular Philly jazz-rap crew. Rahzel always a peripheral contributor to The Roots’ music dropped his solo debut, the occasionally awesome Make the Music 2000, in 1999. A friendly programming executive dropped the trippy video for the excellent introductory single “All I Know” into routine rotation on BET, which helped Rahzel move a few discs and pick up fans who had never heard of ?uestlove. Rahzel’s only original studio album is less a coherent musical work than an exhibition of his unbelievable beatboxing skills. Several tracks are live-recorded beatboxing sessions, and the album ends with a long hidden track of sound effects. If hip-hop were basketball, MTM 2000 would be the halftime show in which those guys dunk from trampolines.

“What do you want me to do? I’m sorry,” he says. The industry has changed, Rahzel says. No longer can an artist impress the right BET programmer and sell a bunch of albums.

“Now it’s a whole lot of red tape, politics,” he says. “It’s not really about love at this point.”

As awesome as Rahzel’s sound effects and beatboxing truly are, few people mention these arts alongside hip-hop’s vaunted four elements, two of which, MC-ing and DJ-ing, are actually profitable. But in what must be his only similarity to David Hasselhoff, Rahzel has “huge fan bases” overseas, he says. Beatboxing is generally more respected in Europe and Asia, he said. He recently attended the Bulgarian Beatbox Championships.

“It’s on a whole other level once you leave America,” he says.

You can hear the true hip-hop head in Rahzel when he diverts the conversation into a totally unsolicited paean to the Wu-Tang Clan. He claims to be “the biggest fan” ever of rap’s kung fu mafia Voltron. Although he congratulates The Roots on their success, he says he has always felt more like a Wu-Tang member than a Roots member.

No matter what Ol’ Dirty Bastard said when he hijacked the Grammy podium in 1998, Wu-Tang is definitely not for the children. But Rahzel is. He hopes to show kids the side of hip-hop that doesn’t hate women and isn’t hiding guns in its trunk. T.I., we are looking in your direction.

“There’s really more to it,” Rahzel says. “You gotta have the vegetables with the steak.”