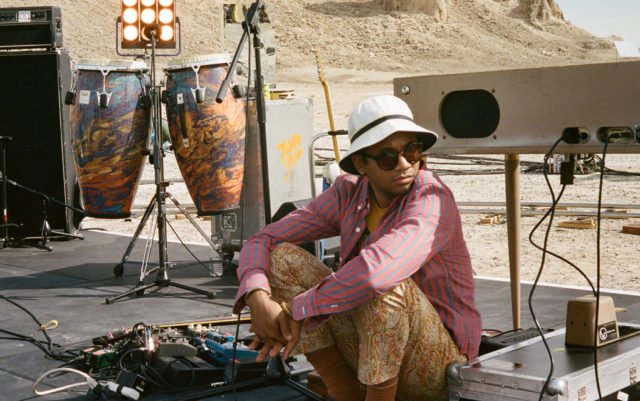 Less than 2,000 people live in the unincorporated community of Trona, California, nestled against the western edge of a dry lake bed southwest of Death Valley. To those unfamiliar with southwestern desert geology, the scene is extraterrestrial at best, apocalyptic at worst, with vast expanses of naught punctuated by limestone spires rising out of the evaporite basin. They say the faintest smell of sulphur is ever-present from a nearby mineral processing plant.

It’s against this desolation that Chaz Bundick chose to set his first live-album concert film, Toro y Moi: Live at Trona, released this summer. In homage to the ambiance of the desert (or perhaps to the sanctity of music), there is no audience, no interview footage interspersed with the set, no backstage antics to distract. There’s only music set against a backdrop as bleak and strange as the future of our nation in the wake of this election.

The film, directed by Harry Israelson, is an obvious callback to Pink Floyd’s 1972 film Live from Pompeii — the model for fantastical, audience-free concert films — set against an ancient Roman amphitheater. But it also takes a note from the Talking Heads’ beloved Stop Making Sense; there’s no attempt to hide the film crew working around the band, yet the focus remains solely on Bundick’s ethereal melodies and the musicians creating them.

“We went into it saying we wanted to make something timeless,” Bundick says. “I think the key to timelessness is simplicity, really, approaching all of these ideas with a simple format is really what makes it transcend time.”

The 30-year-old from Columbia, South Carolina, is the bespectacled face of Toro y Moi, a la Trent Reznor with Nine Inch Nails. Bundick’s been making music under the multi-lingual moniker for more than 15 years, but it was his debut full-length album, Causers of This, in 2010 that drove his work into the public sphere.

Critics called it part of the chillwave movement — down tempo, heavy with samples and digital production.

But his following albums haven’t subscribed to any set format. His sophomore effort, Underneath the Pine, was created solely with live instrumentation and no samples. Tracks like “New Beat” exude an Off The Wall funk mixed with atmospheric, free-flowing synth melodies that wouldn’t seem out of place in an early ’70s Genesis album. Then there was 2013’s Anything in Return, a darker mix of danceable tunes that harkens back to ’90s deep house, two-step and R&B, blending Bundick’s penchant for electronic production with live instrumentation. And most recently Toro y Moi released For What?, another stylistic leap that reads up front like indie rock, with soaring, sunny anthems like “Empty Nesters” that could easily pass as cuts from a Neutral Milk Hotel album.

And yet Bundick’s affinity for funk and atmospheric prog rock is a common thread through all his albums. His new album amasses live arrangements of previous works, an appreciation Bundick says stems from his love for a challenge.

“I know electronic is really big and it’s a no-brainer to go that route sometimes because it is so big; I almost enjoy the challenge of the other direction,” Bundick says. “I don’t know, because people do still like guitars, I think. I think it’s just a weird phase music is in — maybe it’s because of the internet, maybe because of how culture spreads because of social media — I feel like culture is in a weird honeymoon phase. There’s a bunch of really good stuff in your face all at once, but that bubble is going to pop because every city is going to have the same culture.”

Bundick doesn’t take offense when people want to categorize his music. In fact, it’s helped him compartmentalize parts of his personality in the name of exploring other parts.

Through his career he’s used various aliases to release music, like Sides of Chaz (what Bundick calls “college Chaz, free flowing into a four-track machine”) and most notably and more recently Les Sins, an electro dance project. He says he has other musical identities whipping up creative works, but he can’t really talk about that right now.

“With Les Sins, the primary focus of that is production, whether it be hip-hop or house. With Toro the motive is songwriting,” Bundick says. “I’ve always been a fan of labels, whether it’s genres or even if it’s love: Are we dating? Are you my girlfriend? If you put a label on it, it just makes it so much more clear sometimes. Putting my music in those different aliases like that, it’s just sort of clear and it helps me balance that.”

Despite what project Bundick is working on, his primary goal is to create accessible music — something one of his heroes, David Byrne, once cited as a key goal of his work with the Talking Heads. This can be difficult as a musician who is driven toward sating his creative side (Bundick, for what it’s worth, was able to learn piano by ear, performing “The Entertainer” with no sheet music at 8 years old). There’s a fine line to walk in creating music that pleases the artist and speaks to a world of listeners.

But Bundick walks that line without fear, actually embracing the pressure that increasing amounts of success have put on him.

“It’s strange to be in this position; how is it gonna get bigger? How is it gonna last longer? That kind of pressure with your creative work is so weird to me,” Bundick admits. “[But] that for me is just a free for all to just try to experiment with as much as possible. It’s just a free pass to do that.”