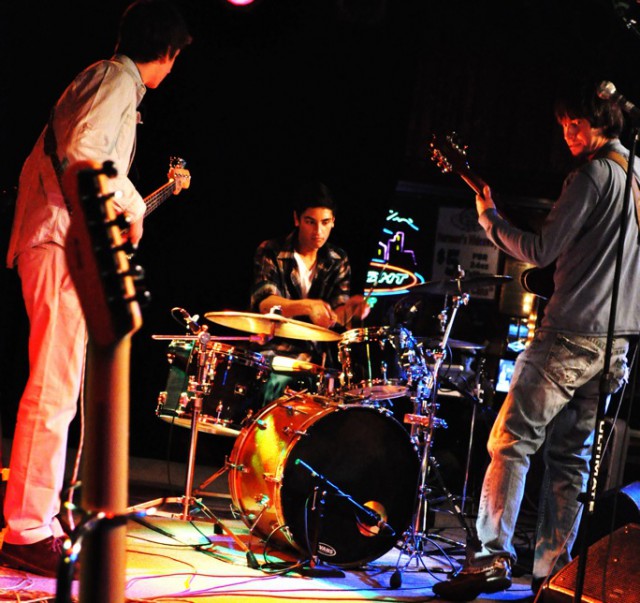 Phrases like “head start” or “early jump” fail to adequately capture the story behind The Big Motif. After all, the seasoned Denver trio average less than 20 years of age among them, yet they’ve been playing together since 2005.

Yes, that means that jazzy blues/rock you’ve enjoyed for years at bars and events around Boulder and Denver was actually a bunch of teenagers. Three, in fact. Jeff Jani and Hunter Roberts grew up a block apart and met Tony Pacello through a radio contest to put together a youth band. Seven members were recruited to play, but Pacello says the trio instantly connected and has stayed together ever since.

While others focus on it as a topic of interest, Pacello says he forgets how young they were and how rare their situation really is.

“I guess it is an anomaly that we’ve been at this for so long when we were so young, but it’s never something I’ve really thought that much about,” Pacello says. “For me, I’m just having fun making music with my buddies. It’s surprising sometimes when people ask how long we’ve been together. You think, ‘Holy shit! We’ve been together for six years already?’ It always hits you when you actually put a number to it.”

Formerly known as The Runnin’ Wild Band, Pacello explains the band has grown up quite a bit since they first started. As time progressed, they felt their former name represented the early days and needed an update. Soon thereafter, The Big Motif was born and gave the band an identity that fit their catchy yet older sound.

“We were young when we had the old band name, and we just brought it together randomly,” he says. “We never thought we’d be doing anything important with it. So the older that we got and the direction that the band started to take didn’t match the old name at all. In fact, it seemed the old name was holding us back and labeling us as this bar band, which is definitely not what we want to be. With the name change, I think it fits our sound a lot better. It’s definitely less cheesy and less childish, so to speak. We like it and we’ve been happy with it.”

All three Big Motif members were musical anomalies of sorts in school, jiving more with the classic rock and blues leanings of their parents, while ignoring the typical radio fare. Pacello says that commonality became the unifying element in forming a band in the first place.

“We grew up listening to stuff away from the mainstream,” Pacello says. “I know I grew up listening to the blues and some of the classic rock stuff that my dad would play. But I really fell in love with the blues. Jeff and Hunter grew up with the same. When we started to explore music more, we all fell in love with jazz and funk and modern rock like Black Mountain and Black Angels and the Black Keys, obviously. But I don’t think we were ever really interested in the pop stuff or Top 40 stuff.”

After releasing a self-titled EP, the band’s now rehearsing for several regional CD release parties for their latest seven-song effort, Does It Weigh Heavy. The new tunes are great for a diverse show that includes funk, rock and everything in between.

“We like to keep their heads bobbing with some of the heavy rock stuff and keep them dancing with the funky dance stuff,” says Pacello. “But we really just like going straightforward in your face, especially with the rock, with this new album. It’s a night that will keep the energy up and the feeling raw.”

In the end, The Big Motif hopes the new music carries them beyond the confines of Colorado into a strong regional presence.

“With the release parties that we have coming up, it does feel like we’re gaining some good momentum,” Pacello says. “It just seems that the gigs and promotions that we’re getting is definitely bigger than it used to be. Hopefully it will continue once the CD is released, but this last month has definitely picked up.”